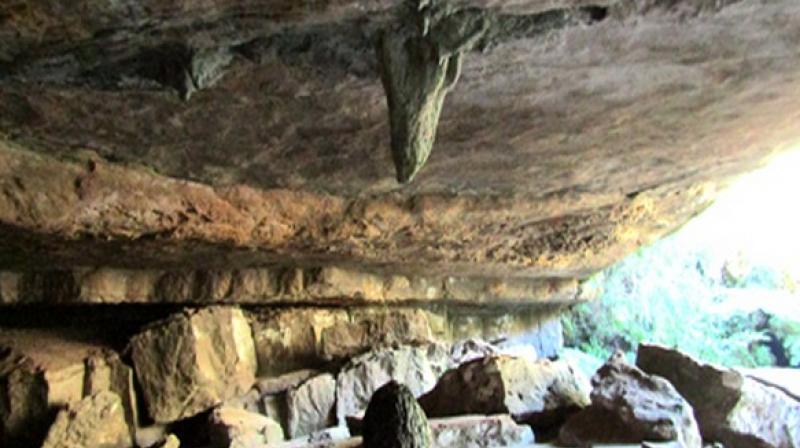 The area also has cafes and lodges for travellers who can have a wonderful stay while they visit Meghalaya. (Photo: ANI)

Meghalaya: Meghalaya is one of the most beautiful states in the North-East region. The state offers a variety of sights, activities, fairs, and festivals for tourists and visitors. One such religious tourist destination which is gradually catching up amongst pilgrims, history lovers and travellers is the Mawjymbuin caves. The caves are located in Mawsynram village in Khasi Hills, situated around 60 kilometres away from capital Shillong.

The cave is famous for the naturally formed 'shivalinga', which is made of stalagmite. Recently, the cave is witnessing hordes of tourists and pilgrims across the country as pilgrims are paying their obeisance to Lord Shiva as part of the Kanwar Yatra or Bol Bam Yatra celebration.

The Mawjymbuin cave is not only famous for its geological importance but also its exquisiteness and natural beauty. Over the years, the giant stalagmite inside the cave has turned the spot into a sacred shrine for Hindus. Since then, during the time of Sravan, lakhs of devotees clad in saffron attire are seen walking barefoot to reach the cave and pay obeisance to the 'shivalinga'.

Tourists have to hire a cab or a bus to reach the cave. It is a must-visit place for those who plan to tour Meghalaya and its adjoining areas. "I have come from Mahadev Khola in Shillong which is around 60 km away from here. We the 'kanwariyas' have walked till here barefoot to pay obeisance to 'baba Bhola Nath'," said a pilgrim.

The Mawsynram village is reportedly the wettest place on earth and the serenity, picturesque backdrop with steep slopes, lush greenery, green mountains and majestic waterfalls adds to glory to the place. The area also has cafes and lodges for travellers who can have a wonderful stay while they visit Meghalaya.