A perfect spot for those in need of a break from city life. 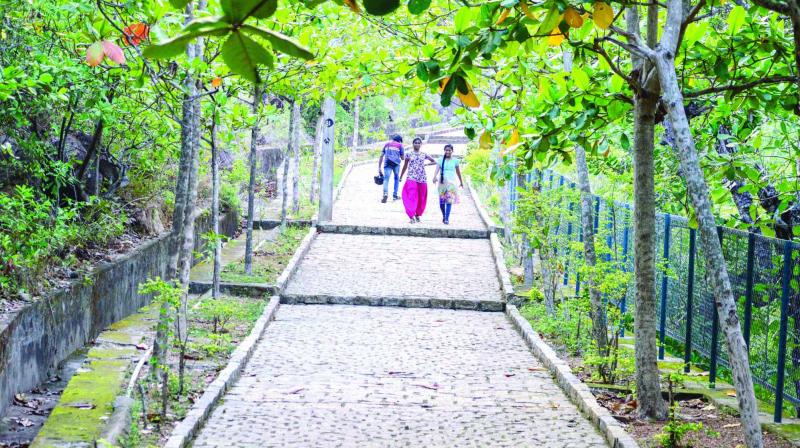 Stone pathway that leads to the peak.

Away from urban chaos, there is Chitharal Malai Kovil in Kanyakumari district that is known for its enchanted calmness and pristine beauty. We had a long ride from Thiruvananthapuram to Chitharal and by the time we reached the place, the sun was already going down at a faraway horizon. It is a long and steep climb from vehicle parking to the peak, where there are old stone monuments. Yet the cobblestoned path had something that tells every visitor about tireless journeys made by sculptors of the past who travelled all the way up to the hilltop centuries ago.

The local name ‘Malai Kovil’ translates to ‘temple on hilltop’. It is recorded that the Jain rock-cut temple was most likely to be built by Digambara Jains more than a thousand years ago with support from King Mahendravarman I. We found carvings and cuts on every wall of the temple that shows rich Jain symbols and figures. The peaceful faces of Jain Tirthankaras are immortalised by the sculptors on those walls. Parshwanatha and Padmavathi are carved out of stone and are canopied by a cobra and Yakshis guard them by side. There are more such male and female figures and they tell much about the medieval Jain architecture, traditions and aesthetics.

One has to pass a narrow lane between two rocks to reach the monument. The cave temple has a mandapa, corridor and a balipeetham (altar). After climbing a few steps, we reach another structure of equal magnificence called the Vimana. Some locals who knew the history of the area told us how the Jain temple was converted in the 13th century to a Hindu temple of Bhagavathy. Some Tamil inscriptions on one of the walls also tell about the patrons who funded this process. Over the course of time, a few portions of the monument got damaged by possible lightning.

Though this place is of extreme historical importance, one can always come here to enjoy the pure aesthetics of nature. Hundreds of families, friends groups and solo travellers come here every day. They are driven by the pure pleasure of sitting on top of the rock, breathing fresh air and watching the long stretch of Dravidian land that ends only where the sky touches the earth. There is a natural pond down the Vimana structure. The place has also become a spot for the youth to take photographs.

Chitharal is untouched by modernity. Perhaps the hills are exactly the same as they were centuries ago when the last rituals were performed there. There are a few shops selling snacks near the parking area and they seem to be the only source of food and water nearby. We sat on the hills till the last portion of the orange sun disappeared. We watched the lights coming alive like white spots on dark canvas. The memories of Chitharal will stay on our minds for a long time.