Bikepacking through the city 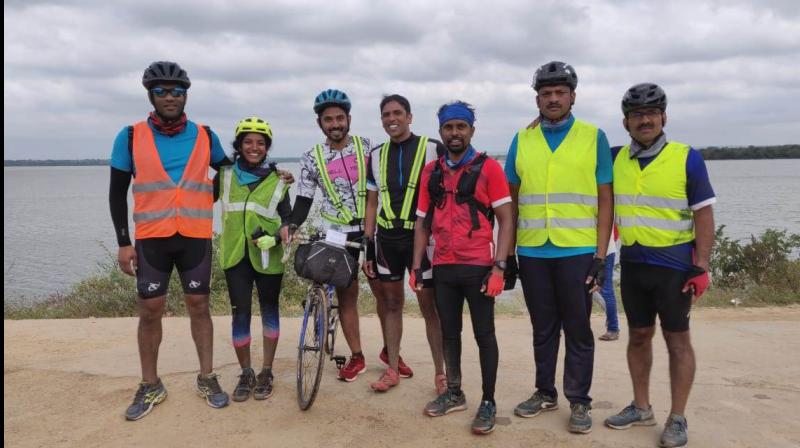 Even as organisers around the world are forced to cancel cycling events owing to the pandemic, a few cycling enthusiasts from Hyderabad decided to adapt to the new normal, ensuring they don’t let the ‘pandemic pause’ affect their fitness game.

Around 40 enthusiasts from various walks of life recently geared up for a 300-km brevet organised by Hyderabad Randonneurs on Saturday. Randonneurs are cyclists who have completed a 200-km cycling event, and a brevet is what a randonneuring event is called. The route for the 300-km brevet was Necklace Road-Banjara Hills-Langer Houz-Himayath Sagar Lake-Shankarpally-Kottapalli Lake-Singur Dam.

Among the cyclists was Chaitra Nataraj, a techie, who had participated in her maiden brevet ride. She tells us that the cut-off time for the brevet was twenty hours. “Just when we began our ride at 6 am it started raining. But that did not dampen our spirits as we kept on riding. In fact, because the weather was cloudy for most part of the day, we did not have to ride in the heat,” shares Chaitra who is also a marathon runner.

Adding how picking up a new sport is always exciting, she further reveals that her fitness levels helped with her endurance during the brevet and helped her overcome any stiffness from the lockdown.

The thrill of the ride

For 49-year-old Ravindra Reddy Vanga, Inspector of Police, ACB, Hyderabad City, the 300-km brevet was liberating. Pointing out that he’d taken to cycling to improve his fitness and health, Ravindra adds, “I’ve been into running earlier and have participated in several marathons. But after I took to cycling, I started feeling better physically and mentally and started relishing these rides.”

Ravindra also reveals to us that he hopes to be a Super Randonneur, a title earned by cyclists who complete a series of brevets (200 km, 300 km, 400 km, and 600 km) in the same year. “While practising running, we have cross-training modules such as long-distance cycling, which also helped me cycle religiously,” he adds.

But brevets require more than just practise. For instance, imagine doing a 300-km brevet where 80% of the roads are on an elevation. Well, that’s what 40-year-old homeopathy doctor, Dr Srikanth Pilli, remembers of the brevet, baring to us how the ride tested his endurance, while making new friends.

“Most of us only wanted to check whether we will be able to cycle for 16 hours. And I am glad that we did it because this has motivated me to prepare for a 400-km brevet next,” explains Dr Srikanth. As for making friends, Dr Srikanth says he made many friends and expanded his network.

Another cyclist Rajeev Reddy (39) describes the brevet as a ‘freedom ride’. The term makes sense especially when he states how bored he’d gotten during the lockdown. Even so, the ride came with its challenges although, as he points out, all the riders could manage their time, food and water by taking frequent breaks.
“All said and done, this ride gave me the required fillip to turn the spotlight back on cycling. Observing nature up close is something you cannot do while going in a car or a bike. So the brevet doubled up like a sense of achievement and a great opportunity to explore the landscape,” says Rajeev.