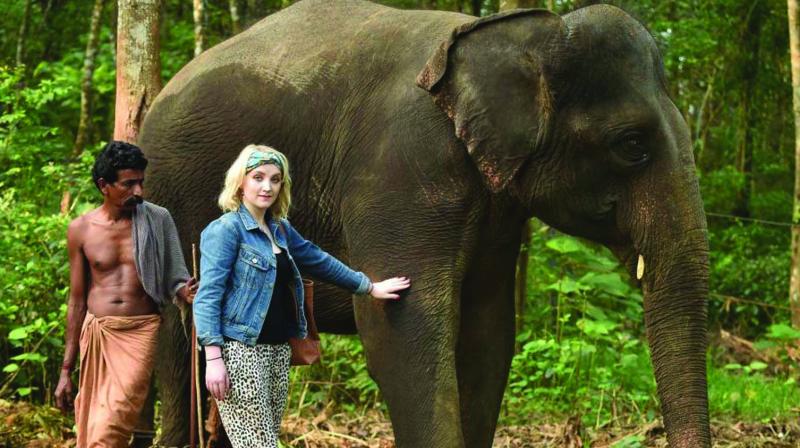 A Hollywood actress visiting Kerala is usually big news. But when Evanna Lynch, who portrayed the iconic Luna Lovegood in the Harry Potter franchise, flew down to the state and spent a week here, no one knew, until a UK-based tabloid came out with an exposé titled Chained and Beaten. The 26-year-old actress, also an animal rights activist, on an undercover trip to Kerala, has unveiled the horrific training and cruel treatment meted out to captive elephants in Guruvayur and Kodanad. The report and an emotional Facebook post by Evanna has garnered thousands of responses, with many lashing out against the ‘tourism stupidity’ and several others, including the actor, blaming it on the ignorance of the western tourists patronising cruel ventures like elephant rides and selfies.

The feature talks about the appalling conditions where the gaping wounds painted grey to cover up the injuries on the gentle beasts tied to tree trunks, signs of huge distress among the jumbos, mahouts whacking, stabbing and hitting the elephants and locking them up in crushing cages. Evanna, in a poignant post, detailed how the broken beings obey orders with fear. “Each elephant has to be ‘broken’ with sticks and cages and brutality in order to be so docile. When not being used, they are chained up at the ankles, unable to move, unable to do anything and living in complete isolation. They don’t get to go home and comfort each other.”These intelligent, social animals all live in separate, private miserable worlds and they just stand there swaying and beating their ears so hard, like wings that won’t take off,” she posted.

“It’s not a revelation,” comments Sreedevi S. Kartha of the charity People for Animals. “That enslaved elephants are being tortured by people who claim to be elephant lovers who don’t have an iota of love for them is not at all a revelation. The mahouts control the elephants using the strongest weapon – fear. They dig the hooked poles into sensitive areas like ankles or nails and prod into its ears. Keeping them chained without letting them move is another torture. The training methods are inhumane – the elephants’ testicles are crushed using poles and sharp hooks pierce into their sensitive parts. To teach obedience, sharp shackles are tied on the wounds and they are thrashed,” says the animal rights activist, who is currently on a mission to save the elephant Karthikeyan being tortured at the Ulloor Balasubrahmanya Swami Temple in Thiruvananthapuram.

“Karthikeyan has been in the scorching sun, chained in a standing position, unable to move, for the past three months. The reason they say is that it is a violent beast and has murdered a mahout. The poor creature is in heat and instead of facilitating it to mate, they take turns in torturing and it reacted. Now, it is being punished and when we questioned, we were denied entry to the premises and they have hidden it behind green curtains,” she says. 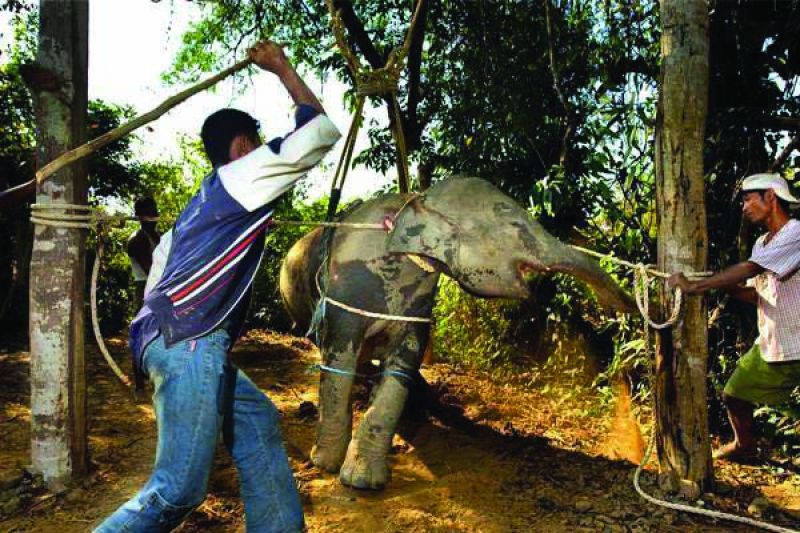 Kerala is home to the largest number of captive elephants in the country. Thanks to the ignorant rejuvenation treatment and barbaric practices, elephants known to have an average life span of 85 years meet an early demise in the state. All the 58 jumbos which passed away in 2017-18 were below 40-45 years. “This year alone, 13 elephants have died – most of them due to constipation, severe arthritis or infected wounds. Even the death of the mighty Thiruvambady Shivasundar was following 62 days of constipation caused due to wrong diet. Keralites think that elephants find palm leaves and jaggery delectable; it’s not their natural diet. A wild animal, elephant lives off green grass and at least 500 litres of water a day and walks for 10-11 hours. Instead they are fed mutton-based rasayana and hundreds of eggs in the name of rejuvenation and are left in shackles for hours, carrying heavy loads amidst loud noise, fireworks and crowd,” Sreedevi fumes.

Though Evanna feels that there’s no point in blaming the people who resort to this cruel acts as the impoverished lot have animal welfare much low down their list of priorities, Sreedevi feels otherwise. “It might be true in the case of mahouts, but elephant-owners eye the heavy insurance, business during religious festivals and the legal safety. Among the around 420 elephants, only a few are fit to be paraded, but all these cover the festivals in the over one lakh temples in Kerala and the owners charge double. Imagine the money coming out of it,” Sreedevi points out.

M.N. Jayachandran, member of the Kerala State Animal Welfare Board, feels that all this happens due to lack of a proper law. “According to the recent government order, captive elephants have wildlife status. How can someone use it for commercial purpose then? Also, the rules stress that any havoc caused by the elephant will be covered by the government. This clause actually let the animals be treated in a more barbaric manner because it makes the owner safe, in spite of what happens to the elephant. If they can make profit, why shouldn’t they bear the loss? It’s high time the state government looked into the matter,” he says.

Evanna has exhorted for a law in the UK on banning advertisements of Asian elephant holidays, sponsorship for mahout training centres and courses on ethical and positive training and to include in travel advisories the dangers in connection with the cruelty to elephants in India. This might even affect the tourism prospects of the state. “We are being an object of mockery before the international community,” laments Jayachandran. “The issues are being brought to the attention of the consecutive governments time and again, but in vain. The weak Kerala Captive Elephants Management and Maintenance Rules 2003 were formed sased on the Wildlife Protection Act 1972,  and in 2012, it was amended to make it an even weaker one. The rules start with the phrase ‘for the smooth conduct of festivals’. Where’s welfare in that,” he asks, adding that there is neither proper law nor required attention on the matter.

Now that the international media is discussing the plight of captive elephants in Kerala, Sreedevi hopes it all lead to good. “Try talking sense into these self-proclaimed elephant lovers, they will turn on their denial mode settings. They read the extreme mental distress signs of elephant shaking its head, waving ears and to-and-fro motion as it’s enjoyment of the scene. To top it all, they give it a religious tone so that no one questions them. In fact, centuries ago, elephants were used in wars and not for religious festivals,” Sreedevi explains.

Jayachandran agrees, “Torturing creatures in the name of culture in fact denigrates our own people before the eyes of the world. Bringing awareness is not easy as said. The wildlife and tourism departments should decide together to end the cruelty. Mahouts should be rehabilitated and people should know what really happens.”

What many do in the name of culture might not appear the same for another. Like too much of anything, love and pride too can be fatal, both for animals and humans.