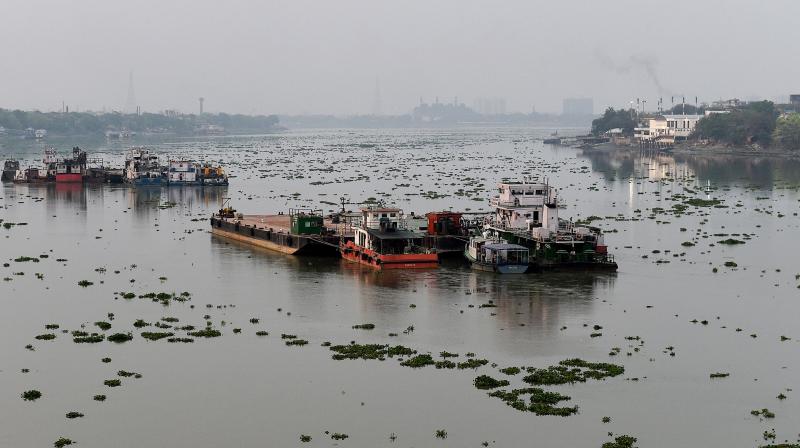 Boats are anchored on the banks of Ganga River during the nationwide lockdown in the wake of coronavirus pandemic, in Kolkata. PTI Photo

Every year, a whopping 350 tonnes of partially burnt human flesh and bones, 10,000 tonnes of ash and cremation-related material, dead cows, buffaloes, monkeys, goats and shockingly even human dead bodies (without cremation)-- all are dumped in this holy river. If that is not enough, millions of litres of sewage, heavy metals from industries go into it even as millions of people are heavily dependent on this river for their daily needs.

For the first time in history, the holy river Ganga is breathing easy. Courtesy: Coronavirus and the lock down !

The ganga, which flows through five states and is most polluted in Varanasi -- Prime Minister Narendra Modi's constituency -- is now regaining all its lost glory, slowly. Pollution in the sacred river has come down by over 40 per cent and is likely to increase as the lock down continues across the country. Though successive governments including the present Modi government spent thousands of crores in cleaning the ganga and still failed miserably, looks like nature always finds its own way of healing.

According to experts who have previously carried out extensive research of river Ganga, the river is now breathing easy with 40 per cent less pollution in all forms, something they call as historic.

''About 33,000 dead bodies are burnt every year in Manikarnika and Harishchandra ghats in Varanasi. About 45 per cent of them are brought from other districts and states which has stopped now due to the lock down. Toxicants like led, copper and cadmium emanating from the 1200 small scale industries in Varanasi, which used to end up in the river, has stopped now,'' explains Professor BD Tripathi, Chairman of MM Ganga Research Centre at Banaras Hindu University, Varanasi.

Speaking to Deccan Chronicle, Mr Tripathi said that the extraction of water for irrigation purposes has come down drastically which has increased the dilution capacity of the river. Once the lock down comes to an end, the professor is looking forward to conduct a detailed study.

Having done several researches on river Ganga and submitted his findings to the Centre over the last five decades, Tripathi says that though there are 30 drains, both big and small in and around Varanasi which discharge 300 million litres of sewage everyday. But luckily, the three sewage treatment plants are still working despite the lock down.
In fact, large traces of metals have often been found in fruits and vegetables grown using the water from the river.

''The lock down has come as a blessing in disguise for the river. In all five states from where it flows, the Ganga is cleaner by 40 per cent. Never in the history has this happened,'' adds Tripathi, who in his earlier reports had underlined that Ganga cannot be cleaned now and efforts have to be made to save it now.

Another expert RP Mishra feels that though thousands of crores were spent on cleaning of the river by successive governments, no one knows where the money went. ''Close to a lakh people bathe in different ghats of Varanasi everyday and about 450 million people live along the river's 2,500 kms length who are dependent on it for their daily needs. All of this has stopped now though locals continue to burn the dead bodies, but the number is very less and therefore, the load on the river is far less,'' he says.
He says that the blasting works in Uttarakhand, which is a seismic zone has stopped now due to the lock down, which is good news for the river.