Rare deer herd found in a World War II weapon base will soon be open for public viewing via bus tours. 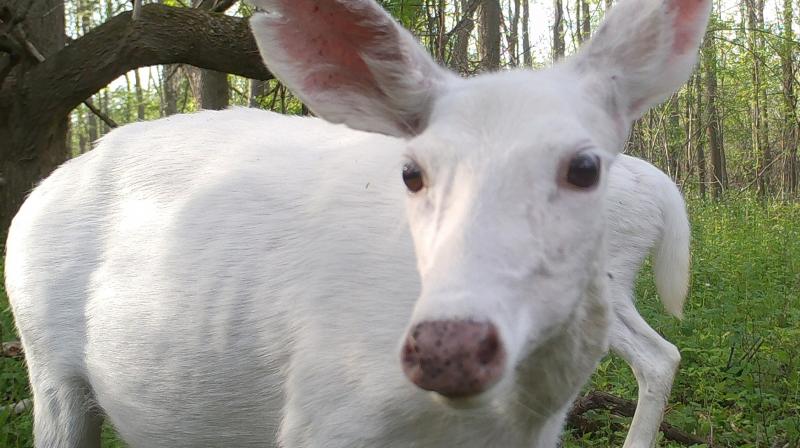 This May 17, 2017 photo shows a white deer captured by a trail camera at the Seneca Army Depot in upstate New York. Public bus tours to view a rare herd of ghostly white deer at a former World War II Army weapons depot are slated to begin fall 2017. The white deer roaming the 7,000-acre Seneca Army Depot in the Finger Lakes have been off-limits to the public for decades, save for glimpses through the surrounding chain-link fence. (Dennis Money via AP)

Albany: A rare herd of ghostly white deer kept mostly from public view for decades is no longer off-limits.

The herd at a former World War II Army weapons depot in upstate New York will be available for public viewing through bus tours slated to begin in the fall.

The dozens of white deer roaming the 7,000-acre Seneca Army Depot in the Finger Lakes have been tough to see for years, save for glimpses through the surrounding chain-link fence. But the non profit Seneca White Deer will offer bus tours starting in October under an agreement with the depot's new owner, Earl Martin.

Dennis Money, president of Seneca White Deer, said Monday the tours will also tell the history of the depot, built in 1941 and closed in 2000. The sprawling site 40 miles southwest of Syracuse housed munitions in more than 500 igloo-like concrete bunkers, now overgrown with trees and wildflowers, and drew thousands of anti-nuclear protesters in 1983 for a summer-long Women's Peace Encampment.

The white deer aren't albinos but are a genetic variant of native white-tailed deer. They're rare in the wild because their color makes them easy targets for predators and hunters, but a herd of as many as 200 developed over the years within the safety of the Army's 24-mile-long perimeter fence.

In recent years, the herd had dwindled to about 75, Money said, but new white fawns as well as natural brown ones have been sighted this spring. Martin, who's expanding his ironworks business on part of the depot, created a company called Deer Haven Park last summer to improve the habitat on a section set aside for wildlife.

The fate of the deer was in question after the Army decommissioned the site and various economic development options were explored, but Martin's $900,000 winning bid last year included protecting the deer for ecotourism.

"The white deer are a real treasure, and to make them accessible to the public is a dream come true," said Money, who has been working to preserve the deer for 20 years.

Money's organization offered bus tours intermittently between 2006 and 2012, and they always sold out. The new year-round tour schedule is timed to launch during the fall foliage and wine tour season in the Finger Lakes.