Ram says that he had quite an experience with the fiery hot dishes that are a staple in Bhutan. 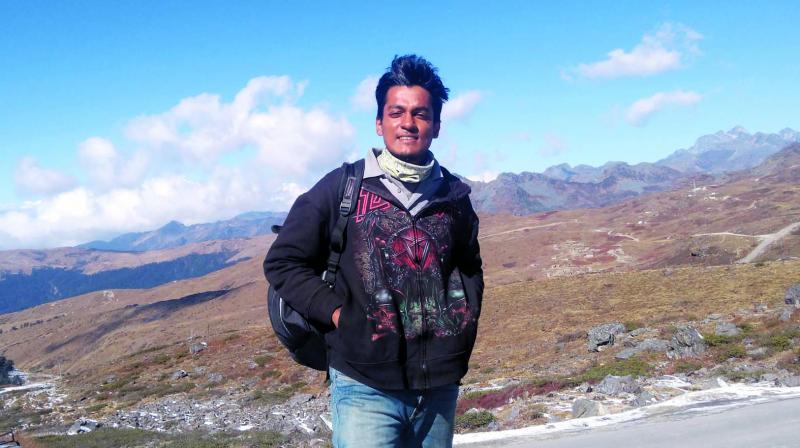 During his college days, young techie Ram Gopalakrishnan from Chennai became very fond of travelling due to his interest in history and different cultures. But the bug really bit when he took out his 20-year-old bike (Yamaha Rx 135) for short trips of a few hundred kilometres outside the city. He realised that riding the old bike was an absolute pleasure. Crazy he might be for travelling to difficult locations on such an archaic bike, but it seems like he knows how to work it.

“It's true that this bike is really not meant for long-distance travelling but this is what I have. Also, travelling by a motorcycle makes me feel more independent. What really matters is the condition of the motorcycle, how well it's maintained and how comfortable the motorcycle feels to the person riding it,” says Ram, who recently travelled a whopping 12,000 km across three countries – Nepal, Bhutan and Myanmar.

The journey started from his hometown Chennai on November 5, 2018, and after covering Nepal, Bhutan, Burma and North East India, it ended in Guwahati after 70 days from where Ram shipped the motorcycle back to Chennai (on January 16). Initially, it was planned as a 30-day trip covering just Nepal and Bhutan, but he extended it by another one-and-a-half months.

For the most part, riding in the cold weather seemed to be the constant problem that Ram had to face because of the time of the year he chose for the trip. “Especially in Bhutan, I had to ride in minus degree conditions without proper winter gear, which made things worse. Being from Chennai where you face tropical warm weather throughout the year, I was too careless and ignorant about the cold weather that I was about to face,” he revealed.

But the cold weather wasn't the only hurdle for the techie. Another one was actually a life-threatening situation where the motorcycle would have broken up completely into two pieces. While driving through Bihar, the chassis of the motorcycle broke at three places at the back. “The chassis couldn't handle the weight of the box that contained spare parts and tools for easy access and  when I bumped the vehicle in a pothole at a high speed, it completely broke. I was totally unaware of it until the next morning, but it was good enough to safely get me into the next town,” explains Ram.

Ram says that he had quite an experience with the fiery hot dishes that are a staple in Bhutan. “Bhutanese cuisine is one of the spiciest and their dishes are almost incomplete without chillies. Their national dish, Ema Datshi, is a combination of rice, red chillies and cheese,” he quips.

From getting a chance to ride on the longest, tallest and wobbly suspension bridges in Nepal to encountering helpful locals, Ram adds that he had a lot to bring back from the trip in terms of memories. “People took me in for a night or two. A motorcycle mechanic whom I met in Guwahati offered to let me stay at his place and also got all the issues of my motorcycle fixed without charging me for it,” he recollects.

Ram suggests that one should travel with an open mind and be ready to accept both the good and bad experiences that come their way.

Essentials to carry on such long trips: