Techie Aadish talks about the ‘out-of-the-world’ experience of trekking to the Valley of Flowers and Hemkund Sahib. 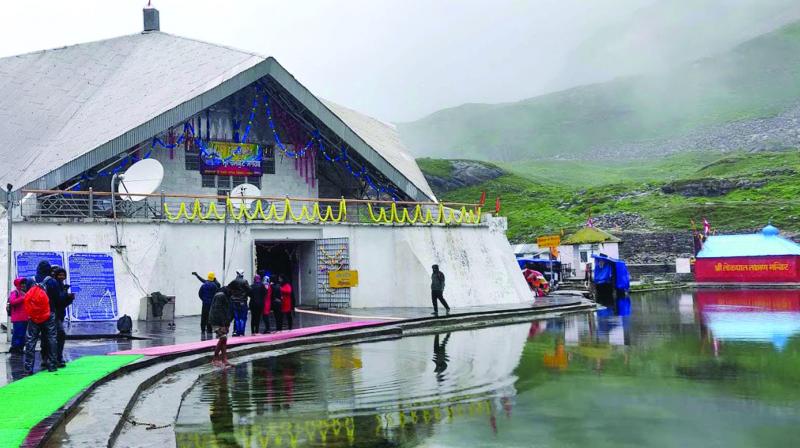 Trekking is a long and arduous activity and, daunting as it may sound, it works like magic for most. People go trekking just to get away from their mundane routine. A group of 30 people coming from different parts of the country was in for the first-ever Himalayan trek of their lives. Such a trek does not always entail going through mountains submerged in snow. The trek to the Valley of Flowers and then to Hemkund Sahib is a different experience. Aadish, a Bengaluru-based Malayali techie who was with this bouncy group of people, terms the experience ‘out of the world’.

“We had decided to meet at Rishikesh, which was the starting point for the trek. It takes at least three to five days to complete the trip depending on your preference, weather and fitness. The journey from Rishikesh to Govindghat took hours since the road was blocked at times due to the rock falls. But our team, comprising of an experienced trekker from Delhi and some local guides, were expecting it. By eight in the night, we reached Govindghat, which is the last motorable point for the trip to the Valley of Flowers and Hemkund Sahib.”

The Valley of Flowers is a national park and UNESCO World Heritage Site and opens between late June and mid September every year. The exact dates are announced a few months before.

After the floods of 2013, a lot of things changed. The trek is rebuilt at most of the places. “Govindghat is at an altitude of 5,500 feet. In the morning, we started our trek to Ghangaria, the next camping point. En route, you can see Alakananda, one of the two headstreams of the Ganges,” says Aadish. After the floods, a new road is built till village Pulna. “Pulna is first village between Govindghat and Ghangaria. Now, the first 4 km of the trek between Govindghat and Ghangaria is motorable. You can get pony/ porter at Pulna village. Since there are more than 400 active pony services, and due to the rush, the road needs to be cleaned very often.”

Helicopter service is available from Govindghat to Ghangaria. The road between Govindghat and Pulna has reduced the trekking time between Govindghat and Ghangaria considerably. “The trek to Ghangaria is strenuous, even tougher than the trek to the Valley of Flowers itself. The distance is 8 km, but 90 per cent of the distance is uphill, some parts of it steep. The green valley is something you would never forget. You can hire porters to carry your luggage or rent a ride on the mule if you find it tough. But, it is not as tough as one might think. However, if you are trekking through these kinds of ways for the first time, it needs a lot of stamina,” shares Aadish. The group headed back to Govindghat in the evening where they camped. And in the morning, they started their trek towards the Valley of Flowers. There is a change in the altitude as you trek, from an elevation of 1,800 metres to 3,100 metres in a few hours. Take it slow, and you should be ideally reaching Ghangaria between 4 and 5pm. Make sure you make it before it gets dark.

“The trail towards the Valley of Flowers is tough,” says Aadish. “It will be stressful also to trek with a heavy bag. So, pack your things accordingly.

“We finally made it to the valley where there are gorgeous wildflowers including the rare and precious blue poppy and hundreds of kinds of tiny flowering plants, all surrounded by surreal landscape. Many of the members were tired after the trek, but we had to return in a fixed time frame. The weather usually gets worse as the day progresses and noon is when heavy downpours occur. So, we starting early ensures that we get to spend more time strolling in the valley. It takes time to soak in the beauty, after all this hiking!

“The last day’s hike was to Hemkund Sahib, which is a famous pilgrimage centre of the Sikhs. There is an altitude gain of about 1,100 to 1,200 m. It’s a difficult trek, but definitely do-able! Also, the Gurudwara at Hemkund Sahib will close by 2pm. It is believed to be the place where Guru Gobind Singh, the 10th Sikh Guru, meditated. On our way back to Govindghat, one of our team members found it hard with the low oxygen level and a doctor at the Gurudwara was there for our help.

“It was for the first time in my life that I watched a glacier. Altogether it was an amazing experience though it tested the mettle of each one of us,” says Aadish. “Getting out of our comfort zones to experience something heavenly, it was special.”