No time for love making

Couples nowadays do not have time to engage in sexual intercourse as they do not have “much time” these days. 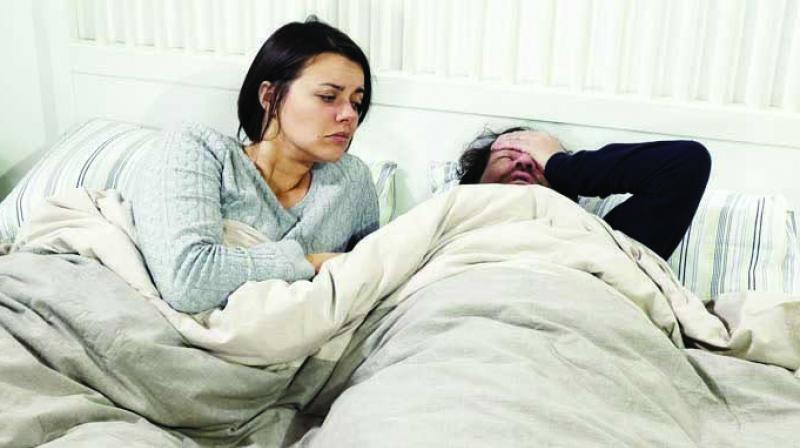 The mystique of sex has been largely obliterated.

We were having coffee before a show, when I heard a statement so radical, delivered so casually I nearly spilt my coffee onto my dress. I couldn't have heard it right, so it was repeated.

He knows of many marriages not being consummated. He’s speaking about Mumbai. The person who stated it is one of those who knows everything about everything, and is respected for it. He quoted journals and appropriate research regarding this phenomenon as being a feature also in New York and other prime urban cities around the world.

A lady at the table spoke of one of her friends who had been happily married for seven years and had not consummated her matrimony. Another referred to a Time magazine article that stated that sex was no longer the focal of a marriage.

Another stated that a Time issue had stated that the libido in men was on a wane as was productive fertility. Around me, people at the table began to endorse that this state may be so, and at some level, it might be happening everywhere.

Are the Baby-Boomers denizens of a bygone era? This millennia has turned accepted matters quite on their heads.

As vociferous voices entered the fray, one thing was clear with what Freud had called the primordial urge that was the force behind all activity was losing its drive? Matrimony as the culmination of the obsessively sought after bliss from heaven had lost its exclusive definition! I am befuddled. You tell me what's really happening?

Vociferous voices suddenly seemed to feel there was some truth in it all.

The mystique of sex has been largely obliterated. The “pill” has brought in its wake a licentiousness perhaps no age witnessed to the present extent.

The ‘Hippie’ generation of massive ‘Woodstock’ rebellion brought in its wake what they called ‘freedom’ from archaic moral codes. Their war cry- ‘We are flower children’ and ‘love’ as their religion translated to expressing it in all its interpretations, physical sex, imbibing drugs, flinging away inhibitions, along with all that was considered proper. The change in society began and rippled to an extreme in some spaces of worship of sexual freedom, display of the body even to nudity.

But coming back to our metro, the table talk was, sex was so much a been there done that thing before marriage, it's sheen was dulled and competing it was the plethora of relatively as thrilling Netflix media viewership, TV serials, the grand high of a drink or two or three after a stressful day at work for both partners! Or simply “Aw let me hit the bed I'm too tired to even fetch a spoon from the kitchen.”

Husbands, wives, both just define the metro generation today as “too tired”. Both partners work. Employment has increasingly become competitive, demanding and a psychological pressure for both. Gone are the times in metros and big cities when the husband, exhausted with all this and tedious travel too came home to the welcome loving cup of tea the wife awaited him with. Mothers and elders are banished from the me-and-my-husband space to live their own. That savvy gentleman adds - Only seventeen percent of couples in prime urban metros endure parents living within their domestic space.

Even when the wife is not out there earning a living, domestic chores are fallen upon her, as that erstwhile section of staff is happily lapped up by the many city malls sprouting everywhere and very few ‘Ramus’ and ‘Marys’ want to drudge in a residential environment. This is a trend in cities which is changing dynamics of marriage even.

So the wife pipes up, “Buddy! we share a home, I'm too pooped to exhibit cooking skills - there's only eggs and tomato, so no energy to work on innovation.”

Yes, there are the lucky ladies of leisure around. It’s a sign of our times that they are too tired for companionship too. It's a demanding business to keep up with her society whirl. It’s harder work than he has to do. Lunches she has to be seen at, dinners she has to host, to shop, to look apart and to display by all means available, her one-upmanship. It’s a twenty four-seven job.

But some even leisurely loll on the couch at home. Yes! But they have to see the nth serial on Netflix or peruse the Facebook-Twitter-Instagram- Snapchat. “Baby tell the cook to serve you dinner, How do I know what is cooked? Don't interrupt! Go to bed, I'm watching the late-late night Blah!”

Children?! So how do children arrive then? Even if the stork were to deliver them, in one voice the partners echo “Not for us! We just can’t cope.”

Now that we see things that were unthinkable are now very much thought, I am getting so many inputs suggesting more reasons for this new-age phenomenon creeping up, maybe there will be a sequel.

— The writer is a columnist, designer and brand consultant. Mail her at nishajamvwal@gmail.com