Life   Relationship  13 Nov 2019  Things to do while travelling solo in Barcelona
Life, Relationship

Things to do while travelling solo in Barcelona

Paella for one: Barcelona dazzles when you're travelling solo. 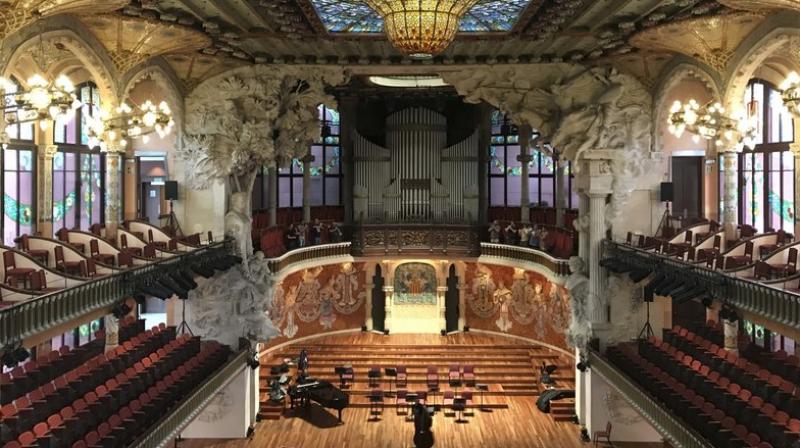 If you are taking a solo trip for the first time, a European city like Barcelona is a good place to start. (Photo: AP)

Barcelona: They were on girls’ trips, guys’ trips, family vacations and honeymoons. They were on the train, sharing massive platters of seafood paella and packed into Anton Gaudí’s mind-bending architectural jewels. And then there was me. The solo female traveller in Barcelona.

If you are taking a solo trip for the first time, a European city like Barcelona is a good place to start. The city is dynamic, the streets and cafes are always packed, it’s safe to walk around at night and people mostly speak English.

Barcelona on your means meandering the Gothic Quarter’s narrow streets or the Eixample neighbourhood’s high-end stores and 19th-century architecture at your speed. And no judgment when you stop for gelato or churros and chocolate twice a day.

If you’re planning a trip, be aware of the political conflict that’s turned violent at times in Catalonia’s capital. Spain’s highest court sentenced leaders of a Catalonian independence movement to prison last month, setting off waves of protests. I was in the city the day the ruling came down and luckily only saw peaceful protesters blocking roads and rallying with flags.

In roughly four days in Barcelona, here are some must-dos and need-to-knows for navigating the city solo.

The toughest part of on-your-own journeys can be mealtime. Sit at the bar, where you can chat with the bartender and get tips from locals or other tourists. But don’t be scared away from Barcelona’s patios and plazas. Cafés and bars — not the thumping-music, cruising-for-singles bars, but where most people grab tapas and wine — are everywhere and bustling.

While tapas let you sample delicacies like cod croquettes and calamari, you don’t have to miss out on the paella that’s usually for two or more: Chefs would make a solo serving of the rice dish. Save most of your appetite for Spain’s traditionally large lunch. The menú del día will give you three courses and beer or wine for 10 to 20 euro.

You will now have plenty of fuel to hoof it 12 miles (19 kilometres) a day and truly breathe in the city. I took a train just once in Barcelona. Many sights are blocks apart, including Anton Gaudi’s iconic Casa Batlló and Casa Milà — his wavy, mosaic-encrusted modernist buildings on the bustling Passeig de Gràcia shopping street.

It only takes 10 minutes between his masterpiece, the unfinished Basílica de Sagrada Família, and the unmissable Sant Pau Recinte Modernista, a working hospital until a decade ago that was designed by Gaudí’s teacher, Lluís Domènech I Montaner.

But it’s going to take a couple of miles to get between those sights in the Eixample neighbourhood and the older Gothic Quarter.

First, grab a SIM card at the airport so you can Google the names of tapas and walking instructions. One day, start at Gaudí’s Park Güell and get ready to climb a hill. Part of the park is free — you can see his viaducts and gardens — but don’t skip the paid area. It has a large square lined with a colourful smashed-tile bench and boasts views of the whole city.

It’s like a fairy tale — one that’s perfect for a selfie — with homes that look like life-sized gingerbread houses, mosaic-encrusted stairs, grottos and a winding stone portico. Walk back via Carrer Gran de Gràcia in the hip Gràcia neighbourhood, bustling with cafes and shops tucked into modernist buildings. See Gaudi’s Casa Vicens, covered with tiles of yellow flowers, down a side street.

Another day, book ahead of the Basílica de Sagrada Família, Gaudi’s famous unfinished church with breathtaking stained-glass windows. Cranes hoist stones above its towers, working to realize the architect’s vision a lifetime later. Pay for the audioguide.

Walk 10 minutes to Sant Pau Recinte Modernista, Barcelona’s best-kept secret. Each of its brick wings has a sumptuous red- and yellow-tiled roof, embossed with religious sculpture. There are few visitors despite its proximity to the most visited landmark in the city.

It is a UNESCO World Heritage Site along with Montaner’s stunning Palau de la Música Catalana. A required tour of the music hall’s crescendo of colourful stained glass and mosaics is pricey but worth it, and you may even catch musicians practising.

For a respite from city life, carve out a half-day for this mountain monastery. Load up on snacks and get to Plaça d’Espanya train station, where English-speaking workers will help you buy a ticket from the machines for the hour ong train. The kiosks didn’t take cash or an American credit card unless it had a PIN attached, so bring your debit card and expect a foreign transaction fee.

Take the cable car up to Montserrat for 360-degree views of the green valley below and rocky peaks ahead. The church is beautiful, but the mountain was the star. Montserrat boasts lots of walks, including a 3-mile jaunt on a paved path from the top of the peak to a viewpoint overlooking the monastery.

Afterwards, you could fit in a visit to Casa Mila, which had no lines in the evening, and nearby Casa Batlló, with its eyelid terraces and acid-trip exterior that looks like crashing waves of water.

It is easy to lose yourself in the grand buildings in northern Barcelona, but the Gothic Quarter’s mysterious streets and cathedrals let you step into an ancient city. Walk down the famed La Rambla street — a tourist haven of gelato, souvenir stands and people watching — until you reach the sea. Then veer into the Gothic Quarter and neighboring El Born area.

Wander through the stunning Barcelona Cathedral, spot the remains of the city’s ancient Roman walls and grab churros and chocolate at Xurreria to eat in a plaza. Work up an appetite for Mercat de la Boqueria, a market where pig legs dangle near stands of colourful mounds of fruit, fresh fish or chocolate. Grab a cheap but tasty empanada and a 1-euro fresh fruit juice.