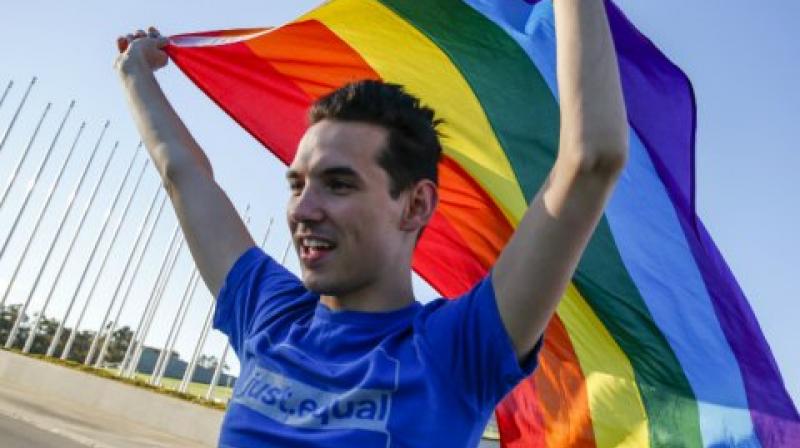 Couples wanting to wed under the new law can lodge a notice to marry Saturday, but will have to wait a calendar month before exchanging vows. (Photo: AFP)

Couples wanting to wed under the new law can lodge a notice to marry Saturday, but will have to wait a calendar month before exchanging vows, meaning the first weddings are expected on January 9.

"I put in an enquiry yesterday, didn't expect to hear back from someone so quickly and they said 'oh, we are open specially today', so we thought 'okay, let's go and do it, let's do it asap'," said Clare Jacobs, holding tight to her newly-official fiancee Valeria Ballantyne.

"I thought we would just come in and sign a form and it would just be a formality, but it's actually quite emotional," added Ballantyne.

The legislation came after more than 60 percent of Australian voters backed marriage equality in a contentious three-month national postal vote.

To mark the historic moment, registry offices in some parts of the country exceptionally agreed to accept new marriage applications Saturday, when normally they are only open to conduct weddings.

"Instead of just doing marriages, we thought we'd open it up to the public today for anyone in our community to come in and lodge a notice of intended marriage," said Amanda Ianna, a registrar for New South Wales state, which includes Sydney. "So it's a nice day to be at work today."

Daniel Barnett and Daniel Gray-Barnett didn't decide until Saturday morning to take advantage of the special hours, but they were still the first ones to register.

"We just got up and came here and signed the papers and yeah, it's a good day," Daniel Barnett said.

The final legislative step for marriage equality came Thursday when only four members of the 150-seat House of Representatives voted against gay unions.

In often emotional scenes in recent weeks, several conservative politicians once staunchly opposed to gay marriage recounted how the months of national debate on the issue had led them to accept that same-sex couples deserved the same right to wed as other Australians.

"It is a big Australian hug for all same-sex couples, saying we love and respect you, now go out there and get married," was how conservative Prime Minister Malcolm Turnbull put it on Friday.

At least two Sydney councils promised free venues to host marriages as a gesture of solidarity with the gay and lesbian community.

"This is an historic day in the struggle for civil rights in Australia," Inner West Council Mayor Darcy Byrne said.

"Council will make its facilities -- halls, community centres and parks -- available free of hire fees for 100 days for any same-sex couples wishing to get married."