Take them to task

The government, especially it’s officers absolved themselves of all accountability for shoddy work. 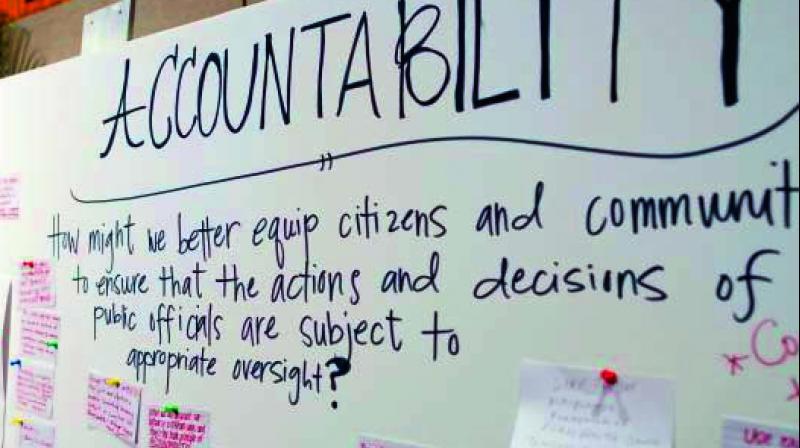 More often than not private contractors simply vanish leaving projects incomplete or in a complete mess.

It has become imperative for citizens to take their state and if required, national government to task. And the most practical way to do that would be in the creation of an independent citizen’s audit, whereby the wrong-doers are punished through a people’s jury in an open hearing. The violaters will be compelled to implement the same. This has become a vital neccessity in the post-liberalised world, where action should be taken against every misdeed

Post the liberalisation and globalisation of the Indian Economy in 1991, a unique template was evolved called the Public-Private Partnership (PPP) to create infrastructure and public goods. The model rests on the ill-conceived premise that the public sector/government does not have the capacity to rollout the infrastructure required for rapid economic growth. Both federal and state governments enthusiastically embraced this model by outsourcing developmental activities to private players. The government, especially it’s officers absolved themselves of all accountability for shoddy work.

However, as this model played itself out infrastructure development became even more slip-shod with private enterprises either executing works that were of an extremely poor quality or actuated by huge cost and time overruns. More often than not private contractors simply vanish leaving projects incomplete or in a complete mess.

For the citizen who is always at his/her wits end, trying to hold the government accountable, this new animal called public-private player has become a new headache.  What can be done to hold officers in government, promoters of private companies personally responsible for not discharging their statutory duties and honouring their contractual obligations? This is a greater malaise in the real estate sector where unscrupulous criminals masquerading as builders dupe and swindle innocent people of their life savings by collecting money in advance for housing projects.

The only way to hold government servants and private contractors accountable for their performance is through an independent citizen’s audit of each public work institutionalised into the sanction order/contract of each public work itself done post it’s completion. The findings of the citizen’s audit would then be presented to a people’s jury in an open hearing. It should be left to the people’s jury to then pick a punishment from a menu prescribed for minor/major violations and the government would then be duty bound to implement it.

Imagine if thousands of such hearings start taking place across villages/cities of India, and errant official’s and private contractors start getting penalised and punished, this would put the fear of God into the deliberately inefficient, temperamentally indolent and the downright maleficent breed of government and private players. A template for Social Audit’s already exists in MNREGA and various other legislations.

Insofar as private builders are concerned while the new Real Estate Regulatory Act has attempted to make them accountable for their actions but the real remedy lies in citizen’s bodies prosecuting them under criminal law. For such robber barons, the old proverb spare the rod and spoil the builder must strictly apply.

Insofar as private builders are concerned, while the new Real Estate Regulatory Act has attempted to make them accountable for their actions, the real remedy lies in citizen’s bodies prosecuting them under criminal law.

Being accountable
Generating platforms for notifications and complaints
Online platforms or other modes of communication to file complaints, request information and whistle-blow on corruption. For instance, the Hong Kong’s Independent Commission Against Corruption, where decisions made by these external bodies are open to the public.

Effective dispute resolution
It is important to have procedures to settle disputes among citizens, the government and public servants. A need for clearly outlined dispute resolution protocols to ensure courts are impartial and fairly assess cases.

Defining authority and ensuring oversight
To help citizens keep officials accountable, the responsibilities and powers of mayoral, CM offices should be defined. Clearing ambiguities reduces pressure on local governments.
Governments should work hard to make use of programmes and policies that allow for better monitoring and evaluation of decision-making.
Strict fines and accountable fees should be charged to the guilty to ensure that deadlines are met.

— The writer is a lawyer and the former Union Information and Broadcasting Minister. He serves as a distinguished senior fellow with a Washington-based Think Tank-The Atlantic Council ) and he Tweets @manishtewari.