Ashna Sudhakaran, a village girl whose father is a farmer, is back from her three-month internship in NASA. she tells her story. 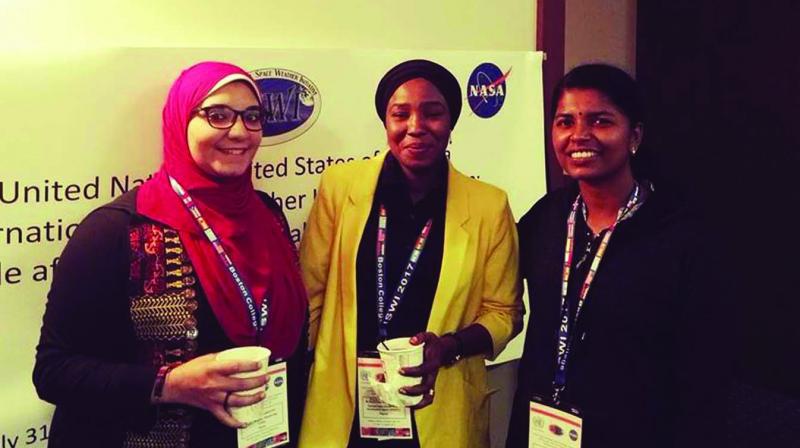 I know nothing with any certainty, but the sight of the stars makes me dream — these words of Vincent van Gogh on her Facebook profile summarises Ashna Sudhakaran’s dream. The 27-year-old is just back from Washington DC — from NASA, where she was an intern for three months at the Goddard Space Flight Centre. For the daughter of a farmer who studied in a government school, it has been a proud journey from a little village named Koduvalli in Kozhikode to the prestigious space research centre.

“NASA was nowhere in my plans. My dream destination was either the ISRO or the Vikram Sarabhai Space Centre,” Ashna begins excitedly. Words gush out as Ashna talks about her family, school, teachers, research, sun, love for literature and travel, deep admiration for APJ Abdul Kalam, high regard for Kalpana Chawla and about her NASA days.

The self-confessed chatterbox reveals, “I was never the studious type. All I did was read novels, stories and poems. A very weak student in Mathematics, I had no idea about even a branch named Space Physics then!” Space Physics, her area, is the study of everything above the earth’s atmosphere up to the edge of the solar system.

Ashna was a ninth-grader when Indo-American astronaut Kalpana Chawla died in the Columbia space shuttle disaster. Reading about her and her space venture, Ashna started idolising Kalpana and carried her photograph all the time. Her friends teased, calling her ‘the space girl’. Ashna was in class X, when former President and India’s Missile Man Dr A.P.J. Abdul Kalam visited Kozhikode where he gave an inspiring talk for three hours. Listening to him among the audience, Ashna — who says she didn’t even know that he was a scientist — found her second idol.

After graduating in physics with 80 per cent marks, she joined a college in Tiruchy for post-graduation. “I came to know that St Joseph’s College, where Kalam had studied, was nearby and went there,” she recalls. Walking along the corridors of his school and sitting in his classroom filled her with energy. Once, she went on a solo ‘pilgrimage’ to Rameshwaram, the abode of her icon, visited Kalam’s ancestral home and interacted with his brother and relatives.

For the M. Sc. internship, students had to submit a thesis. When most of them chose to stay at home and submit a ‘purchased’ project, Ashna stayed on the campus alone and worked in the library for hours to come up with hers.

For the mandatory internship, she applied to VSSC, but got rejected as they had no place for M. Sc. students. She tried again and again even as she lost one whole month waiting, and finally, impressed by her letter of interest, they took her in.

“There, I worked on gravity and ionosphere physics. The experience there ignited my passion and thus began my research career. For MPhil thesis internship, I applied to the 100-year-old Solar Physics Observatory in Kodaikanal. Again, they didn’t entertain a woman in their campus which had four to five staff, all of them men. I couldn’t give up and kept sending mails. After a rigorous interview, I was let in. The six months I spent there were very surreal. I was the only person who stayed on the campus at night; everyone else was staying outside. Later, when I read C. Radhakrishnan’s Pullippulikalum Vellinakshatrangalum about his stay at the observatory as the sole person on the campus back in the 60s, I could very well relate to it. That was my story!” laughs Ashna who later also interned at the Aryabhatta Research Centre, Nainital.

Her journeys were not limited to laboratories and internships; she travelled all over India alone wherever there were summits, conferences or anything that discussed Space. One such journey took her to Maharashtra where she attended a 15-day programme and learnt about the SCOSTEP Visiting Scholarship offered by NASA. “Under the programme, young scientists and graduates were trained in solar-terrestrial physics labs. My research was on the geo-effectiveness of the energetic phenomena of the sun. Getting selected was not easy as they offered it to only four persons every year, and so, I had not much hope,” she says.

It was on her wedding eve that Ashna received the email announcing her selection to the Heliophysics Division of the Goddard Space Flight Centre; she had 10 days to submit her research proposal for the fellowship. Her husband Umesh, an environment officer at a tiger reserve in Tirunelveli, was very supportive of her dreams and passion. With everyone’s wishes and support and her hard work, Ashna bagged the `7-lakh fellowship from NASA which covered her travel, accommodation expenses for the duration of the stay. “My little village celebrated it and for my family, there could be no prouder moment. But all my worry was about my first flight,” she chuckles remembering the nervousness.

NASA was a new world to this small-town girl — scientists constantly inspiring each other, friendly people, experts who guided her through mistakes. “My work was on solar radio burst and it was no 9-to-7 research. The Centre was open 24x7. I explored the organisation, observatories and departments, attended various workshops, interacted with space weather researchers from around 50 countries… it was an inspiring, memorable opportunity.”

Ashna had moments of doubt too. “I am not academically bright; I am just driven by passion. I was demotivated at times, but my fellow researchers said that the world of science needs both intelligence and passion and asked me to never lose the passion. I won’t,” she says.

She wants to spread the word — that opportunities are always there before you; you just need to look for it. “Every child should know that despite their background — even if their parents are poor, even if they study in Malayalam medium schools or are not brilliant, they could make it there if they have strong passion. I am planning to do a space physics outreach programme at my school to share my experience with kids who want to become another Kalpana Chawla,” she explains.

Ashna would be back in NASA — she could go back any time — after completing her research in two and a half years. Happiness is double now as Ashna and Umesh are awaiting their first child who will be born in a couple of months. Marriage and motherhood will never stand in the way of her dreams. “People around me have influenced me a lot. My sole dream is to go to Space. I know that 99 per cent of the work happens on ground and astronauts are just a tool. But I’d definitely go there.” The Space girl she is, she knows her path to the stars.