While selective outrage over burning issues is nothing new, in light of the volatile political climate, the divide is more apparent. 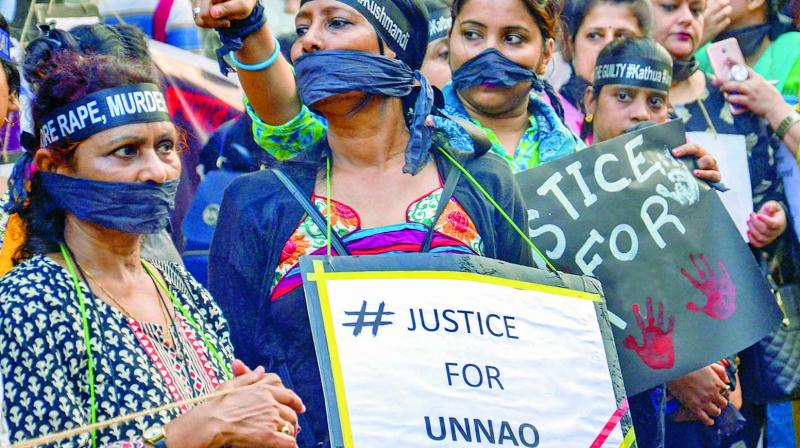 While some have condemned the dastardly act on social media, most preferred not to comment on the issue.

Last week, when filmmaker Aparna Sen along with 48 signatories had written an open letter to the PM Narendra Modi on their concern about the ‘religious identity-based hate crimes’, it was followed by a new open letter by actress Kangana Ranaut and 60 other signatories, deeming the first one as ‘selective outrage’. In practice, selective outrage is nothing new, but in light of the recent events and the volatile political climate, it has come under the spotlight.

Earlier this week, shocking news from the infamous Unnao region in Uttar Pradesh gripped the country. The rape survivor, who had accused Bharatiya Janata Party (BJP) MLA Kuldeep Sengar of raping her, was fatally injured in a car accident, killing her relatives. Her family along with the opposition blame the MLA for the deliberate attempt on her life. While some have condemned the dastardly act on social media, most preferred not to comment on the issue. Social thinker Shiv Visvanathan points out at the gravity of ignorance. “It’s not selective outrage, it’s misplaced pomposity of the highest order, if something is wrong, it’s wrong. In that sense, it’s that post step that some of the elite have taken that shows their congeniality with the current regime in power than the criticality of the events today,” he says.

But it wasn’t always the case. In 2015, when the debate of intolerance had just started, Shah Rukh Khan had gone on record to say that there is extreme intolerance in the country. It resulted in massive protests agonist the actor and his then newly released film Dilwale, so much so, that the actor, who is considered to be formidable, had to retract his statement. Even when Aamir Khan revealed that his wife suggested that they leave the country owing to intolerance, the actor received a massive backlash and for a while, people were calling for boycotting the actor’s release of Dangal. It’s clear that when the cost of opinionating is this grave, the celebrities will prefer to look the other way.  Image consultant Chaya Momaya, however, feels that most shy away from commenting because they are unaware of the stance they should take. “So how can anyone comment on that? A social issue is easy to comment than something to concerned with the government. We are not legally aware of what is right and what is not, and exact details of what’s happening. You have to be completely aware of the subject before you could make a comment,” she says.

A short while back, when Samajwadi Party MP Azam Khan had made a sexist remark against the BJP MP Rama Devi, the Textiles and Finance minister Smriti Irani and Nirmala Sitharaman had vehemently lashed out against Khan. However, there appears nearly to no outrage against the recent development in the Unnao case. “I find it shocking that when their own MLA, a member of a political class is accused of rape, killing victim’s father and planting a pistol on him, they are silent. This is selective outrage,” says Sushmita Dev, former MP, who was speaking from a protest march in Lucknow.

Moreover, she called this lack of outrage as a facet of cult politics. “These people who have written for Modi, they are part of the cult politics that has swallowed India. I am in shock that people who spoke for Modi from the film, art and culture world, are so blind that they don’t see the victim who is laying on an ICU in the ventilator. This is nothing but, that they are victims of cult politics,” she says.

Vivek Agnihotri who was one of the signatories believes that open letters are political tools and it was important that both sides get to tell their story. “I felt that all these people who had written the letter initially knew only one side of the story and it was important that someone presented the other side of the story. And that’s exactly I did, and that’s why I got everybody involved,” he says vehemently opposing to having taken part in selective outrage. “Everybody I know has been talking about Unnao rape case, even I have tweeted something about it in the morning. Very often, in these kinds of cases, the outrage builds up and later you realise that the news was wrong, and it was something else. That’s why people don’t want to dip their fingers into something they are not sure about. I never do selective outrage. I have a very clear-cut political agenda and everybody knows about it. I talk for the cause of India, which is anything that is good for India.”