The only Indian woman to complete the Raid de Himalaya, 30-year-old rally racer Sarah Kashyap wants to ride bikes till the age of 90. 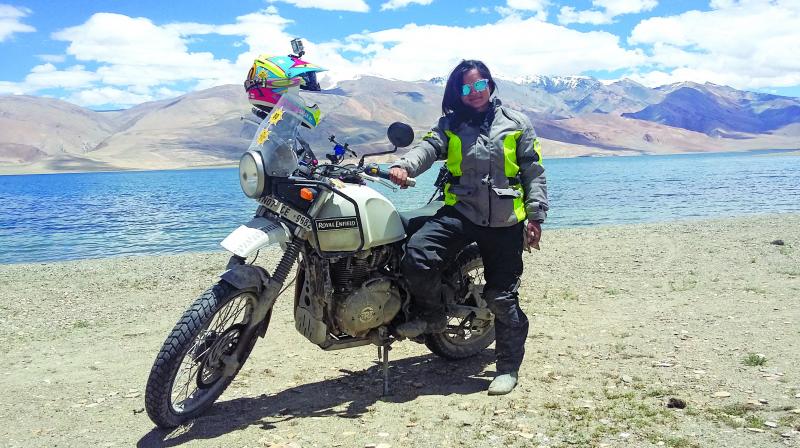 The 30-year-old cross country rally racer is tough as nails and can give any man a run for his money.

She has an MBA from the University of Wales, has worked for Google and Royal Enfield but ultimately found her calling in the field of speed and thrill.

As 70 participants lined up for the India Baja Dakar Challenge series in the golden city of Jaisalmer recently, it was hard to miss the petite Sarah Kashyap. But make no mistake. The 30-year-old cross country rally racer is tough as nails and can give any man a run for his money.

“I am going to ride bikes till the age of 90,” declares the Chandigarh girl. “I have been riding for over a decade but I started participating competitively only three years back. I am just eight rallies old but have finished two major cross-country rallies. My theory in life is simple: whatever a man can do, a woman can too! For me, there’s no man and woman on a motorcycle, it’s just your bone and flesh.”

She is the only woman in India to have completed the Raid de Himalaya, the last stretch of which she rode with a broken collarbone. “In my first Raid de Himalaya in 2015, I was one of the 20 who finished the rally. In the next, I was the fastest Royal Enfield girl, finishing an overall 12th out of 70 riders till I had a crash that sent my bike off the cliff, 30 feet down,” she says. “Leaving the job unfinished is not an option for me. I will fall, dust myself and keep going and that is exactly what I did that day. I feel proud of myself,” she says.

Is she not scared of injuries? “When I started racing, people used to tell my dad that your girl will die one day. And he would tell them, ‘Even if she does, she will go in full flight like a star. She could even die in a room if ceiling fan falls on her, but the rally circuit is just better.’” She adds: “I had a lot of concerns from my Punjabi mother that dekhna ajj kudi na wapas nahi aana (Today, she is not going to return). I have had those moments. But all that did not stop me.”

Sarah definitely carries that spirit with her as she travels the country’s length and breadth on her bike, sometimes with just a tiny bag of survival essentials. People smile at her, acknowledge her but on many occasions, they try to intimidate her too. “I would not say I have faced molestation but then there are nasty comments,” she says. Sometimes, she turns back and gives them a piece of my mind.

“In the circuit, initially, they called me a picnic rider but gradually fellow riders understood I am here to compete, grow and at some point of time give serious competition to everyone around.”