Ustad Amjad Ali Khan remembers his father and guru Haafiz Ali Khan as he performed with his sons Amaan and Ayaan Ali Bangash in the city. 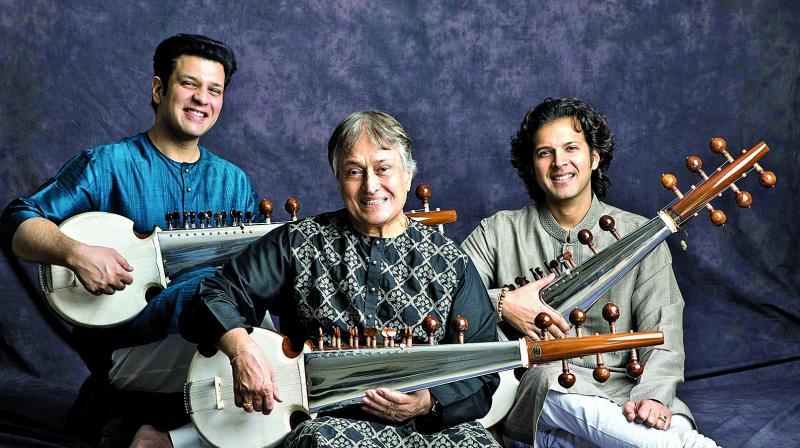 Ustad Haafiz Ali Khan, born in a house responsible for giving the sarod its present shape and structure, could make his sarod sing.

“My father often told and taught me that I should never be the cause of humiliation of Indian classical music,” recalls Ustad Amjad Ali Khan about his father and guru Ustad Haafiz Ali Khan on his death anniversary.

Ustad Haafiz Ali Khan, born in a house responsible for giving the sarod its present shape and structure, could make his sarod sing. “This he did by a very advanced technique of the left-hand fingernails and a thorough understanding of the Raga pattern, filtered through feeling and aesthetic awareness. He could flower with tonal accuracy even when the string pitch went down by a quarter note or more. He believed that rag music in its purity can only be preserved by precision. Stretching the raga too long will lead to irrelevant phrases, raga dilution, and deviation,” describes Khan, who took centre-stage with his sons Amaan and Ayaan Ali Bangash at the memorial concert Shradhanjali in honour of his father.

The concert was a collaboration between the Sarod Ghar — Khan’s 300-year-old ancestral house in Gwalior, which is now a museum of musical heritage — and National Centre for the Performing Arts (NCPA).

Ustad Haafiz Ali Khan was not just a majestic sarod player, but also a great dhrupad singer who easily translated his incomparable vocals onto the metallic instrument of his ancestors. Khan goes on to narrate that for his father — the fifth-generation descendant of the Bangash Gharana—there was no question of a life outside of music.

“His exquisite music was not just an artistic performance, but a form of prayer. My father, who was also my guru, believed in quality. He was very precise in his presentation and dealt with the essence of music. He often talked and felt sad about the prolonged interpretation of a raga. He very strongly believed that every raga is a living entity, having a soul. Every raga should be dealt with great reverence, discipline, and love because if the raga is not happy with the interpretation of the musician, it can curse the artiste,” says the Padma Vibhushan awardee.

The musical maestro believes that in classical music or any creative field, strict discipline, hard work, sadhana (meditation), and the blessings of one’s guru and parents can help one reach their goal. The same zeal has been passed to Khan on under the guru-shishya parampara, and has passed it on to his sons Amaan and Ayaan Ali Bangash, who represent the seventh legacy of sarod players.

Having grown up in a musical environment, for the brothers music has become the reason for their existence. Though there was no pressure, the responsibility of carrying on the family legacy was well understood by the brothers.

“Our relationship is more of a father-son than a teacher-disciple. Of course, the change in role for us and him from a guru to father and back to a guru is somewhat effortless. He has been the most patient teacher and the most loving father. Abba’s teaching and philosophy are beyond music. It’s a way of life. It was as natural as that,” smiles Amaan.

Growing up, they not restricted from any music, but their inherent aptitude for Indian classical music ultimately won over. “Our father would always be happy to see us listen to music and not just practice it. And not just his music, but of different artistes, right from the era of our grandfather to the contemporaries of our father. We were never asked to listen to a particular artiste or not to listen to another, nor were we told to listen only to classical music and not to listen to the West or Bollywood music. But it is only natural to be influenced by the music that your guru speaks of or refers to when he plays. Thus we became engrossed in Indian classical music, along with our contemporary choices,” he adds with a smile.

As for Ayaan, being a musician is in itself a blessing, which he sketched as he played each note with perfection in sync with his father and brother. For him to be onstage can when performing is a period of creative frenzy that is sometimes supernaturally unreal.

“A musician is not answerable to anyone but himself. There are times when you get off stage only to realise that something special happened up there on stage that day. It’s a blessing to be in a profession of what you love doing. It is also a non-debatable factor that music is indeed the best way to connect to that supreme power that we have never seen. Be it any religion, music has always been the pathway to spirituality,” he concludes.