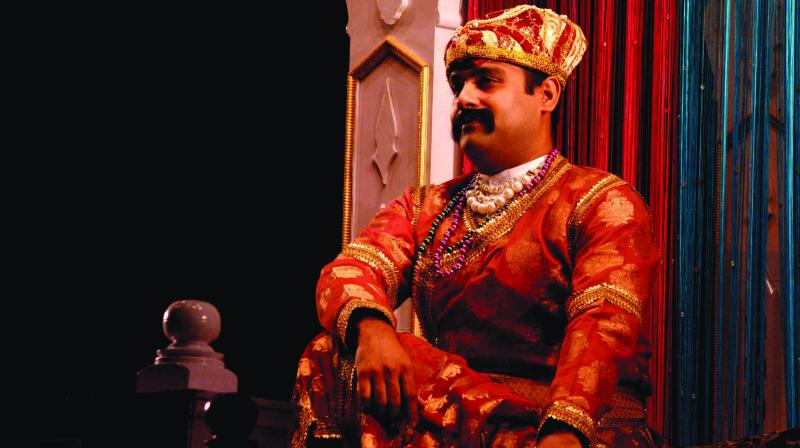 The play has outstanding performances by Aryan Pratap Singh as Akbar, Mrinal Mathur as the Bengali Dr, and Tanay Tarany as Atal Behari Vajpaypee.

A brilliant laugh out loud play intriguingly entitled “Akbar The Great Nahin Rahe” premiered at the Little Theatre Group auditorium last week. Directed by Pierrot Troupe’s Dr M Sayeed Alam, the wickedly clever dialogue is written by Mrinal Mathur. The satire is set in that portion of Heaven reserved for people from the subcontinent – so there is Gandhiji, Asoka, Alexander, Allaudin Khilji and Akbar. A special place in Heaven “Lutyens Swarga”, where “everything, even electricity is free” is reserved for people who were called “great” on earth. A new entrant is the arrival of Atal Behari Vajpayee, the first person to be sent to Heaven since Jan 30th 1948.

When on earth Akbar’s greatness comes into question, and Maharana Pratap is deemed equally great if not greater, the authorities in Heaven decide to ask Akbar to leave Lutyens Swarga to make place for Maharana Pratap.  So Akbar decides to fight for his rightful place in history, and urged by Atal Behari Vajpayee goes down to earth to persuade the “influencers” of today’s world – the electronic media.

The latter half of the play is set on earth in a TV channel studio where the slanging matches between the participants is truly hilarious, as is the spoof of Arnab Goswami who repeats ad nauseum that it’s his TV show and he can shut anyone up.

The extremely slick production has a cast of 12 in which several actors double up and enact 2 and even 3 roles. The humour is apolitical, despite being on political subjects, and old fashioned, rib ticklingly funny.

(When Atalji queries why there are no other political leaders in Heaven he is told Pt Jawaharlal Nehru was considered but “unke saath poora kumba chale aata saath saath”, how photography was invented in India through “help” from Italy and Portugal and lots more). Alexander asks Akbar why he always sounds constipated while talking, apropos his dialogue in “Mughal e Azaam”.  There are wonderful one liners – “Indians always prefer to parent rather than patent”; on the surgical strikes “Hindustani kisse ke ghar mein ghusega bhi and maarega bhi”.

One of the funniest, and also most topical lines in the play is during the debate on TV about Akbar’s greatness – the host calls upon a reporter who is bringing positive proof that Akbar was not great, that infact he was a philanderer and abused women – she claims she has actual living witnesses. An incredulous TV host queries twice and then concludes I think you are talking of MJ Akbar not JM Akbar (Jallaluddin Mohammed Akbar).

The play has outstanding performances by Aryan Pratap Singh as Akbar, Mrinal Mathur as the Bengali Dr, and Tanay Tarany as Atal Behari Vajpaypee. Mathur’s Bengali accent is impeccable, as are the slow pauses a la Atal ji . Alexander’s accent wavers between American and European, which jars somewhat, and the play is too long and repetitive in parts; one felt the entire dialogue between Atalji and Akbar could have been shortened.

At just under 2 hours, the play tends to get long winded as one’s attention span has shortened.  The writer, Mrinal Mathur spoke of how the play took shape with inputs from all the actors. The scene in the TV studio apparently was totally spontaneous and grew on its own, without directorial input. He shared how he has quit his job to take on full time writing for theatre.