When the red moon shines

As stargazers lift their faces upward to catch a glimpse of this phenomenon, there are others who huddle superstitiously indoors. 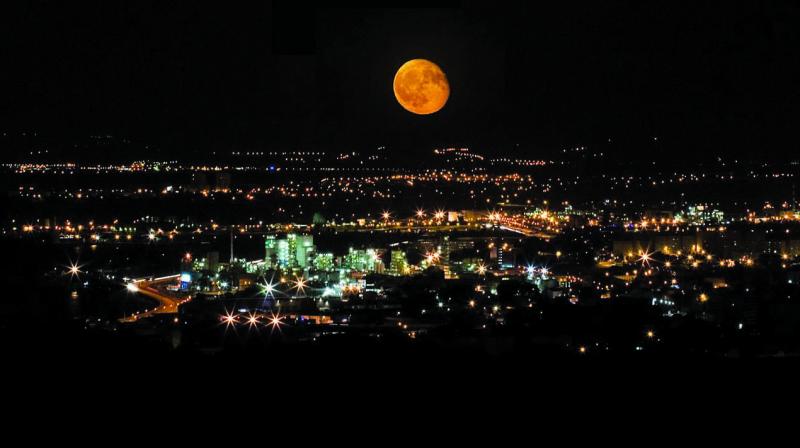 As the waves in the Arabian Sea start to lash higher against the sloping promenade of Marine Drive and wash over Juhu beach leaving behind tide pools, Mumbaikars know that it is a clear sign of the approaching full moon. This time, however, the full moon brings with it a phenomenon that the Earth has not seen in the last 151 years — the blue moon, super moon and lunar eclipse occuring on the same day!

“Actually, the last time that the blue moon and the lunar eclipse clashed was back in December 30, 1982. However, it was not a super moon at the time,” says space enthusiast and IT professional Gaurav Chaturvedi. “The red moon occurs every time there is a lunar eclipse. When the sun, earth and moon align, the particles in the atmosphere that lends the moon its blue tinge are blocked out. This gives the moon its red colour. The super moon is an occurrence that takes place when the moon comes closest to the earth. And when the full moon comes out twice in the span of a single month, the second moon is called a blue moon.”

Slight disappointment may be in store for someone who is looking for a spectacle. “It is not as though people will be able to see anything spectacular with their naked eyes. To them it will look like a regular lunar eclipse, even though it is actually a once-in-a-lifetime phenomenon,” Gaurav explains.

For those who still want to have a look at the eclipse, Gaurav believes that a secluded spot with less interruption in the form of city lights is perfect. “It would be great if they could drive out a bit, but even a high terrace will suffice,” he smiles.

As stargazers lift their faces upward to catch a glimpse of this phenomenon, there are others who huddle superstitiously indoors. Author and expert of myths Anand Neelakantan, says that the mythology behind the eclipse is to blame for the superstitions and ill omens. “It is said that when Vishnu was beguiling the asuras as Mohini and serving amrut (nectar) only to the gods, one asura caught onto the ploy and sat between the sun and the moon to partake of the immortalising potion. Just as he had swallowed some, the sun and moon realised what had happened and brought Vishnu’s attention to it. Vishnu quickly chopped off the demons head, hence creating Rahu and Ketu — two parts of the same asura, who is now immortal,” he explains, adding that during the lunar eclipse, it is said that the serpentine Ketu swallows the moon as revenge. However, since the demon has only half its body, the moon comes out again.

“Since the demon is a serpentine one, people believe that the air turns poisonous during the eclipse. That’s why people encourage you to stay at home. In olden times, people would even throw away leftover food and even bury it so that animals couldn’t eat it either. They would also go to the temple to bathe, to get rid of the lingering ill effects of the eclipse,” adds Anand.

In olden times, people would even throw away leftover food and bury it so that even animals couldn’t eat it. They would also go to the temple to bathe.
Anand Neelakantan
Author