Vijeesh Ethayi has been on a mission to expand the green cover on his land. 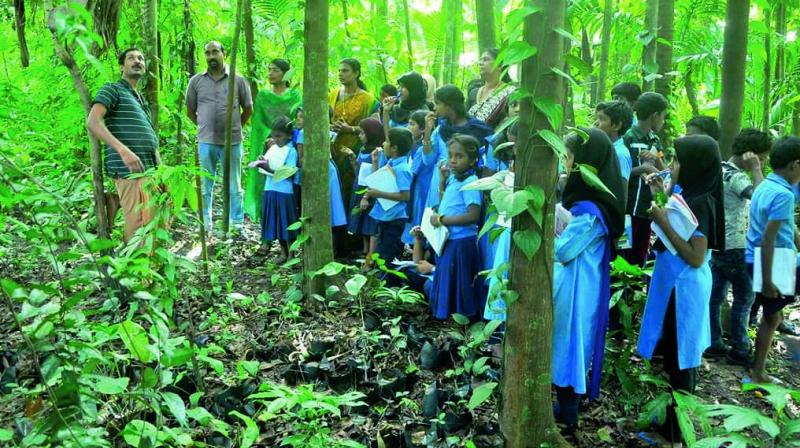 It was noon when the bus halted at the coastal village of Vadanappally in Kerela. The blazing sun even made the tarred road appear molten. Following the directions to Vijeesh Ethayi’s home, the walk ended near a sprawling green land and suddenly the temperature went down.

“You can feel the difference, right? The temperature is at least 10 degrees less here,” says Vijeesh. Housing hundreds of trees and rare flora and fauna, the mini forest is a part of his ancestral land that he  converted into a green belt over several years.

A toddy tapper by profession, he is a green activist at heart. He has been invited to talk, take classes and initiate several afforestation drives. He loved trees since his childhood. His first resistance to deforestation started like Chipko movement. When his parents decided to cut down a tree on their land, little Vijeesh sat under it, refusing to move until they dropped the plan to cut down the tree. He also went to various forests for trekking. “I realised that my life was meant to be in a forest. I was adamant on moving to a forest and spending my whole life there,” he recalls.

It was only later that he thought of building a forest and living there. Since then, he has been growing a forest. It’s full of rare butterflies and birds like the IUCN Red-listed Indian Paradise Flycatcher and Orange Breasted Green Pigeon seen in deciduous forests. He also breeds ornamental fishes in ponds.

“Aquaculture was started by my mother as a hobby. But now, it is a small business for her,” he says.

The verandah of his little house, where he lives with his family, is full of aquariums of various shapes and sizes. His house too is cooler than  the forest.

“This structure is at least 150 years old. It was built using clay. You won’t find many houses like this in Kerala,” he beams with pride.

He then proceeds to show his backyard, where he keeps saplings, budding shoots and rare medicinal plants for people. The trees range from sandal, red sandal, teak, mahogany to bamboo. There are also medicinal plants like ashoka, kayampoo (Memecylon Malabaricum), camphor and fennel. The list goes on.

Vijeesh’s place is so special, it has a visitor every day –  students come on study tours, agriculture and forest officials come to learn about new species in the forest and wildlife photographers arrive from various parts of the country to catch a glimpse of the rare birds here.