Frank to reverse his impeachment?

Kevin Spacey may have been bumped off in the House of Cards but he is in the news again for uploading a video on his YouTube channel. 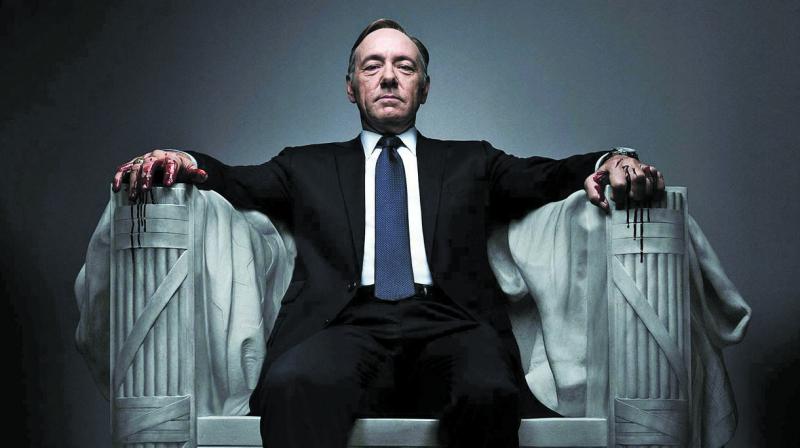 While House of Cards has given us some incredible performances by every actor involved in the series, it was spacey who kept the otherwise bit-of-a-stretch show going.

Fallen from grace, ousted by his own people for being a conniving megalomaniac and finally ending up dead. Frank’s journey in the American TV series House of Cards was much like actor Kevin Spacey’s real life catastrophe. But the two-time Oscar winner actor is yet again in the news. This time for uploading a disturbing video — Let Me Be Frank — on his YouTube channel, garnering over 7.7 million views in just a matter of three days.

The actor played the lead role of Frank Underwood, a dangerously ambitious Congressman who went to unimaginable lengths to get the final seat of power — POTUS. And he had by his side, the incredible Robin Wright playing the calm, composed, humanly flawed and just as ambitious Mrs. Underwood.

But the critically acclaimed series took a massive dip in its ratings with its last season of the total six, when Frank was promptly killed off. And the primary reason cited was the absence of Kevin Spacey, who was ticked off from the show after multiple sexual assault allegations against him came to light.

While House of Cards has given us some incredible performances by every actor involved in the series, it was Spacey who kept the otherwise bit-of-a-stretch show going. His boderline-creepy monologues by breaking the fourth wall — a technique long-forgotten in contemporary films — was a breath of fresh air that offered a shock value along with the darkness of his character.

However, Spacey used this very technique in the somewhat bone-chilling Youtube video, in his complete Frank Underwood charatcer. He started of by breaking the fourth wall and addressing his viewers directly, “I know what you want. Oh sure they may have tried to separate us. But what we have is too strong...I have told you my deepest darkest secrets...”

The monologue feels like Frank is speaking on behalf of Spacey, defending and almost threatening a gureilla revolution against all those who pointed fingers at him and Frank. Spacey in the video then goes onto presumably take a dig at the makers of the series, and their bad reviews, while hinting at what the film industry may have “lost” after Spacey was shunned from the various projects he was working on.

But the part in the three-minute long video that has every fan and critic’s attention is where Frank speaks about coming back and questioning the audience if they really believed he was dead. He is heard saying, “”We’re not done, no matter what anyone says. And besides, I know what you want. You want me back.”

The video ends with a dramatic gesture that the House of Cards fandom is all too familiar with — Frank putting his ring back on. The gesture has the beehive buzzing with theories that Netflix might just renew the series with Kevin Spacey playing his iconic character while the comments section on YouTube video, quite unfortunately, has seen a flurry of “Hope Kevin Spacey/Frank Underwood comes back” comments.

Will Frank Underwood make a surprise reappearance? Only time and Netflix can tell us that...as Kevin Spacey faces felony charges for assaulting a then-18-year-old boy at a bar in 2016.

Tags: while house of cards