A project that portrays the pain and sorrow of the people from conflict-stricken Kashmir is part of the biennale. 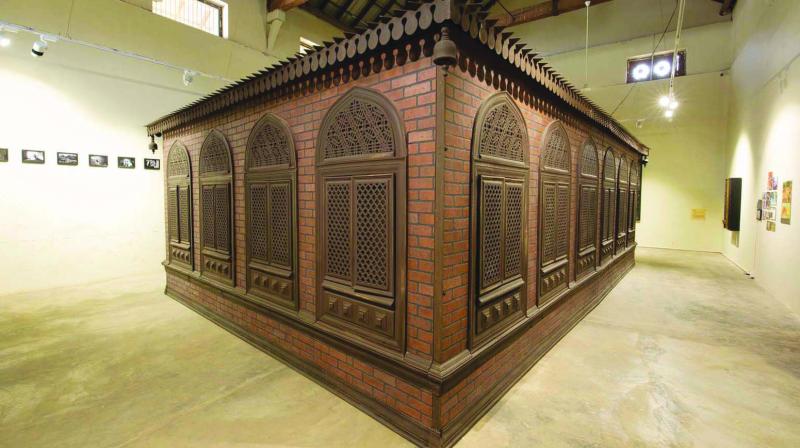 According to Srinagar-born Munshi, the nurturing structure borrows elements from Kashmiri architecture, reinforced by secular values.

The misery of thousands of Kashmiris, caught in the ethnic conflict in their state, has been portrayed in a far-off land more than 3,500 km away. A pavilion presenting the artwork from Srinagar is part of the ongoing Kochi-Muziris Biennale. It is one of the infra-projects, a significant part of curator Anita Dube’s vision. This segment, curated by artist Veer Munshi, turns focus to the pain and sorrow of the two communities that were forced to flee their land and settle elsewhere as refugees. The project features 14 artists from both the religious faiths that have been affected by the conflict that flared up in 1989.

Showcased at T.K.M. Warehouse in Mattancherry, the central work of the project is a structure shaped like a Sufi dargah. According to Srinagar-born Munshi, the nurturing structure borrows elements from Kashmiri architecture, reinforced by secular values. “Sufi shrines are considered  common place where all could go and pray,” he notes. The idea is to showcase how spaces like these have become marginalised, points out Delhi-residing Munshi, whose work, too, has been displayed in the segment. The interior of the shrine features several baby coffins with papier-mache bones and skulls. The installation is surrounded by works of other artists.

The art comes in the form of performances, paintings, photographs, papier-mache works and new media mix. The participating artists, besides Munshi, are Altaf Qadri, Ehtisham Azhar, Gargi Raina, Hina Aarif, Inder Salim, Khytul Abyad, Maumoon Ahmad, Mujtaba Rizvi, Neeraj Bakshi, Rajendar Tiku, Sanna Irshad Mattoo, Sauqib Bhatt and Showkat Nanda. Overall, the project documents alienation faced by the Kashmiris. “Most Kashmiri artists have been in and out of the Valley since the 1990s,” notes Munshi. “While some belonging to the minority Hindu community fled as part of mass exodus, the others — mostly Muslims — stayed back. Both have suffered in these shrinking cultural spaces,” says the 63-year-old artist. He further explains that the only recourse is to give life and return love to the region; embrace it and become strong.

Artist Gargi’s work has crows as messengers, while Sauqib’s work talks how violence and conflict become memory and, inversely, memory becomes trauma. On the other hand, Mujtaba Rizvi juxtaposes his own images with those of the people who have disappeared in Kashmir. His series, titled If There’s a Son That She could Kiss, started as a performance wherein the artist sought to present an image to Praveena Ahanger. That’s the name of the man whose son, Javaid Ahanger, was picked by the security forces two decades ago. “He has been missing ever since,” Rizvi points out. “The viewer will have to search for the current status of the people in these images — just like the parents of the disappeared person are in a state of perpetual search.”

Sanna has a video that captures a gravedigger sharing his trauma, while Neeraj’s minimalist drawings titled Premonitions are a stark representation of the happenings in the Valley.

As part of the project, the collective did a 12-hour performance featuring Sauqib and Hina. Both the artists frisked people visiting the exhibit area to showcase how normal surveillance has become in Kashmir. They confiscated personal belongings, restricted people’s entry and asked for identity proofs without speaking or giving justification. “Many felt offended,” says Saquib. Adds Hina: “Others were confused. They did not know why we were frisking them.”

The message, eventually, was made clear. And loud.