An experimental initiative by Sharan India invites patrons to watch a film without having any prior knowledge about it. 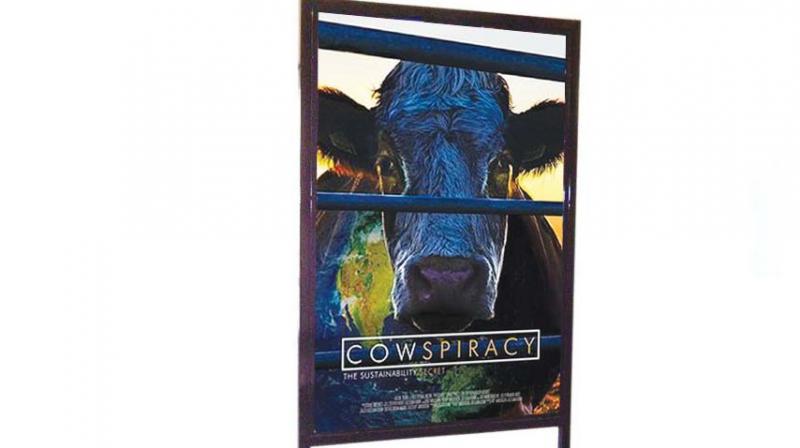 The suspense of not knowing what’s in the store is always intriguing, whether it is a blind date with a person or a movie. We chose the later and made our way towards a small office located along the busy roads of Andheri. As the lights go off, presenter Sarah Pinto expresses how the documentary— Cowspiracy: The Sustainability Secret — educated her about the issue as well turned her father into a vegan activist. The documentary begins with a guy named Kip, who is inspired to save the environment, one small step at a time. So, he is seen walking or cycling instead of using a vehicle, taking a short shower, changing the light bulbs and also segregating waste for recycling. But on further research, he stumbles upon something, which is impacting the environment at a massive level: Animal Agriculture.

Statistics keep piling on the screen, comparing the harm to the environment done by other factors and animal agriculture and every time the bar graph is almost out of the scale.

The documentary takes you through the various aspect of animal agriculture from commercial animal farms, organic ones, the fishing industry and even backyard animal agriculture. One scene that would strike a chord with animal lovers is when Kip visits an organic animal farm. Acres and acres of lush green lands with few farm animals roaming around where a little girl talks about how friendly the pigs are and how well they recognise people. But she doesn’t want to get too attached to them because ‘well, they’re gonna turn into bacon,’ she says.

Organised by Sharan, Blind Date with a Move is a monthly event focused on educating people on different aspects of veganism. Talking about the idea behind this concept Sarah says, “What better way to get to younger generation than through visual aids? So I thought of having movie screening. I started with this concept of a blind date with a movie, so people are intrigued because they don’t know anything about the movie until they reach here.” Started in July, this was the third edition of Blind Date with a Movie, and to keep the documentaries interesting and different Sarah alternates between categories like health, animal and environment aspect of veganism. “First we screened What The Health which was from the health point of view. The second one was about animals but I didn’t want to show anything graphic so I showed Dolphin Tale, a true story about a dolphin whose tail got stuck in a cage and had to be amputated off. Then the dolphin befriends a boy who rescues him. They build a strong bond and later he gets a prosthetic tail made for the dolphin.”

At the end of the documentary screening, Sarah engaged the viewers in a discussion and various questions on veganism were raised. From the nutrition point of view to how this lifestyle will affect social relationships, she answered all the queries as she also narrated her personal experience of the journey.