Life   More Features  30 Sep 2017  Here are a few facts on Dussehra you probably did not know
Life, More Features

From the origin of its name to the significance, we share a few interesting facts about Dussehra 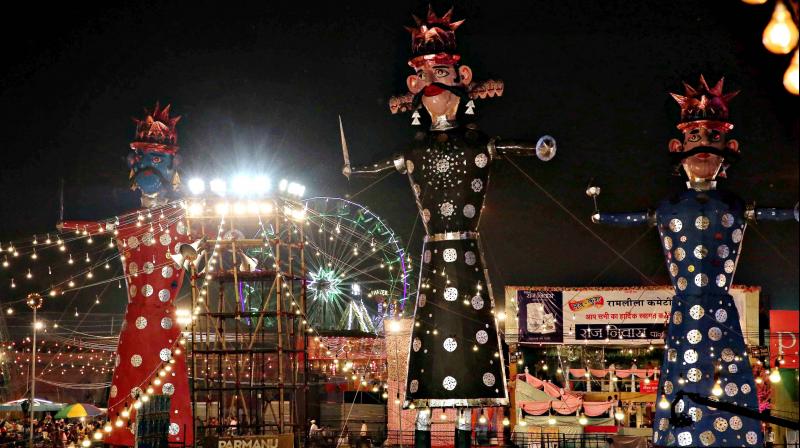 Workers busy in making effigies of the evil king Ravana at a workshop ahead of Dussehra festival in Nagpur, Maharashtra. (Photo: PTI)

Celebrating the triumph of good over evil, Dussehra, the ten-day-long celebrations, take place across the length and breadth of the country. Following Navaratri, Dussehra (Dasara in some places) sees various effigies of Ravana being burned to commemorate the occasion and Ramlilas, that dramatise parts of the Ramayana, being staged.

We share a few lesser known facts about Dussehra:

Significance and origin of name: The festival celebrates two victories, one, that of Lord Rama over the evil king Ravana and the other of Goddess Durga over the demon king Mahisasura. It is known as both Dussehra and Vijayadashami. The words, both of which have Sanskrit roots means, in case of Dussehra, Dasha+hara or the defeat of the sun and Vijaya+ dashamai, which translates into victory on the tenth day.

Dasara in Mysore: One of the grandest celebrations in India, it is believed that the tradition to celebrating Dussehra in a grand way started around the 17th century. There are traditional Jumboo Savaris, where decorated elephants are taken out in a procession. The highlight is the Goddess Chamundeshwari, who is placed in a golden palanquin on top of a decorated elephant.

Ravana’s 10 heads: According to mythology, the 10 heads of Ravana symbolise his knowledge of the six shastras and four Vedas making him one of the most intellectual man in mythology. Also, the 10 heads represent the 10 human emotions anger, jealousy, ego, lust, greed, pride, attachment, selfishness, injustice and cruelty.

Kullu Dusshera: Dussehra is celebrated for a week in Kullu, Himachal Pradesh. The festival kick-starts on Dussehra, and continues for a week after that. It commences with a procession of Lord Raghunath, along with other deities, carried across the town in the Valley of the Gods.

Dussehra celebrations outside India: No, it is not just restricted to the country. Both Dussehra and Vijayadashami are celebrated beyond the borders of India and in Nepal and Bangladesh as well. There are celebrations even in Malaysia.

Return of the Pandavas: A lesser known fact about Dussehra is that it also celebrated the homecoming of the Pandavas from exile. After the final year of their exile was over, it was on the holy day of Vijaydashmi that they retrieved their weapons and worshipped both weapons and the Shami tree. From that day onwards, the Shami tree is considered as a symbol of good will.

Important for Buddhists in India as well: The famed emperor Ashoka had converted to Buddhism on this day. The once conqueror would go on to spread Buddhism throughout the Indian sub continent and was responsible for spreading the religion far and wide.

Marks a change in seasons:  Dussehra marks the end of the gloomy monsoon season and start of the cooler winter season. After Dussehra, farmers harvest the kharif crop and plant the rabi crop after Diwali.