People on social media had a field day with this one. 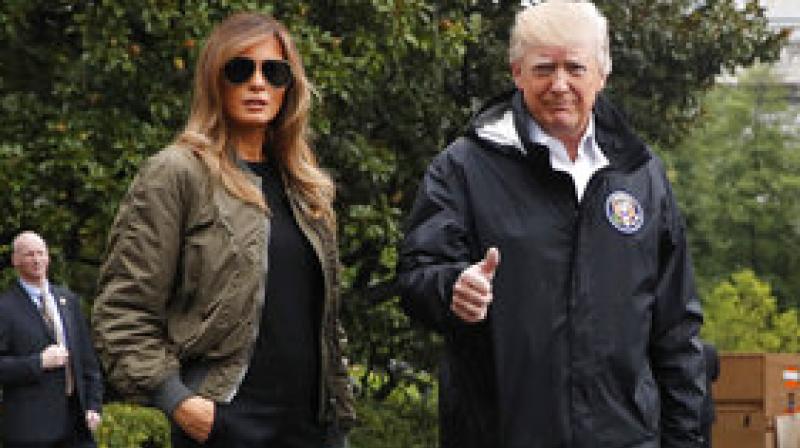 President Donald Trump, accompanied by first lady Melania Trump, gives a thumbs-up as they walk to Marine One on the South Lawn of the White House in Washington, Tuesday, Aug. 29, 2017, for a short trip to Andrews Air Force Base, Md., then onto Texas to survey the response to Hurricane Harvey. (Photo: AP)

New Delhi: Looks like The First Lady of the United States Melania Trump's outfit for her tour in Corpus Christi, Texas to see the damage caused by Hurricane Harvey, did not go well with the people around.

Melania was savaged on the social media after she choose to wear a black stilettos while travelling to Texas. The former model was seen wearing a black cigarette pants, an Army green bomber jacket, aviator sunglasses, and high pumps, while heading to Air Force One on Tuesday morning.

As soon as her look was revealed, Twitter exploded with jokes over her choice of footwear.

Some of the tweets read as:

Actor Zach Braff tweeted, "Melania headed to a disaster zone in stilettos is my Halloween costume."

"And here we have Melania Trump modeling what NOT to wear to a hurricane: 5-inch stilettos," tweeted another one.

Meanwhile, Melania Trump's office fired back at the trollers terming the attention to her outfit "sad."

According to Fox News, the first lady's Communications Director Stephanie Grisham told, it is sad that amidst the ongoing natural disaster in Texas, people are worried about her shoes.

After landing in Corpus Christi, she was seen wearing a black trousers and a white button up shirt, with a pair of 'white tennis shoes.'

She also wore a black baseball cap that read 'FLOTUS,' which is an abbreviation for 'First Lady of the United States,' which set another round of bashing of Melania on Twitter.