#RashtrapatiSaveRTI has hundreds of netizens making their opposing stance known against the controversial RTI amendment bill. 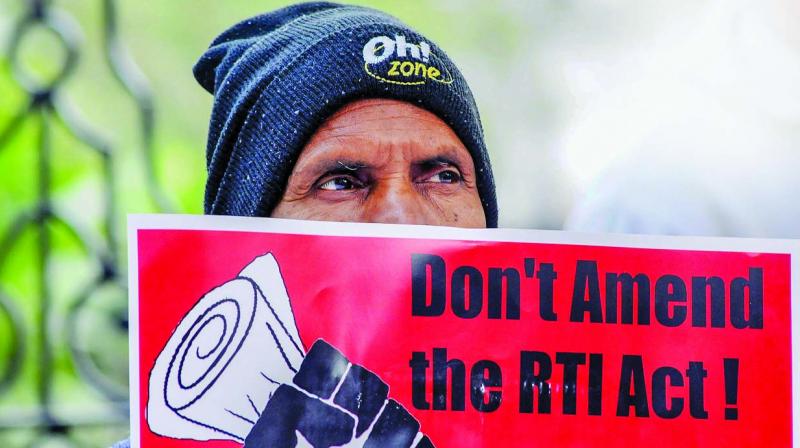 The original RTI Act was passed in 2005 and gave every citizen of the country right to demand information from the public authorities regarding their organisation, functions, and financial information, among others. (Photo: File)

As Rajya Sabha passed the controversial bill of amendments to the Right to Information Act (RTI) last week, activists, politicians, lawyers and citizens are on their toes, requesting President Ram Nath Kovind to not assent to the changes. In a tag that has been going rounds, namely #RashtrapatiSaveRTI, hundreds of netizens are making their opposing stance known.

The original RTI Act was passed in 2005 and gave every citizen of the country right to demand information from the public authorities regarding their organisation, functions, and financial information, among others. From journalists to a common man, people have time and time again filed RTI to extract information from the government. And hence, the law has been regarded as one of the major tenets of democracy. “It was the first law that we call as the victory of Jana Sansadha (People’s Parliament). This was the first law in the 21st century in India which was brought by the demand of the people and not  by the demand of the Parliament, so if you are hampering a law like it, it’s very bad,” says social activist Vishwambhar Choudhary, who calls the RTI Act as the ‘Mother of All Laws.’

So what are these changes that have incurred so much of backlash?

Under the current act, the status of the head of the RTI body called Chief Information Commissioner (CIC) is considered equivalent to that of the Chief Election Commissioner (CEC). And so, the President appoints CIC in order to give them autonomy from the government. “Since voting and right to information went hand in hand, that’s why the CIC was given the same status of the CEC, and they both enjoyed autonomy,” reminds Bombay High Court lawyer Varsha Bhogle Deshmukh.

However, the amendment bill that is making changes to Section 13, 16 and 27 is being criticised for it threatens its independence from the government. Under the changes, the Central government, henceforth, will decide the tenure of service, salaries and allowance for the CIC and Information Commissioners (IC) at both the central and the state level.

At first glance, this may appear to be quite insignificant changes, however, activists feel that by giving itself the power to prescribe terms, the independence and the transparency of the watchdog body will be compromised. Putting it in simple terms, Adv. Varsha points out at the brimming fear when she draws a possible case of misuse. “It can be inferred that rather than approaching the issue with transparency and safeguarding the rights of the citizens, ICs will be more interested to be friendly with and appease the ministers because they will now be in charge of their appointments and their salaries,” she says.

However, the legal expert Alok Prasanna Kumar dismisses the fear saying that the move only downgrades the position of the CIC.  He also suggests that the impact on their independence can only be claimed when such instances have actually manifested.  Moreover, the incumbent appointees will remain unaffected by the changes.

For Choudhary, the government’s move is enough for him to draw a dangerous inference. “Section 13 prescribes for the provision to remove the CIC, and it says that if there is misbehaviour or moral turpitude, there is a prescribed procedure for that. The President will make a reference to the Supreme Court and SC will then make an inquiry, and based on that inquiry, the President will take the call.  Now with Section 13 amended, it all provides everything to the government. The fact is that the government has become more powerful than the President and Supreme Court,” he suggests.

What accentuates the controversy is the flaky backdrop of the move. Acting on an RTI, an IC had requested PM Narendra Modi information on his education background, so when there are attempts to ‘dilute’ the act, the critics are calling it as a revenge move. “It is very much clear that now the CIC asked the information from PM Modi regarding the education of the PM, they have done it in the manner of taking revenge on the system,” says Choudhary.