The entire structure is a confluence of British and Indian aesthetic and symbolism. 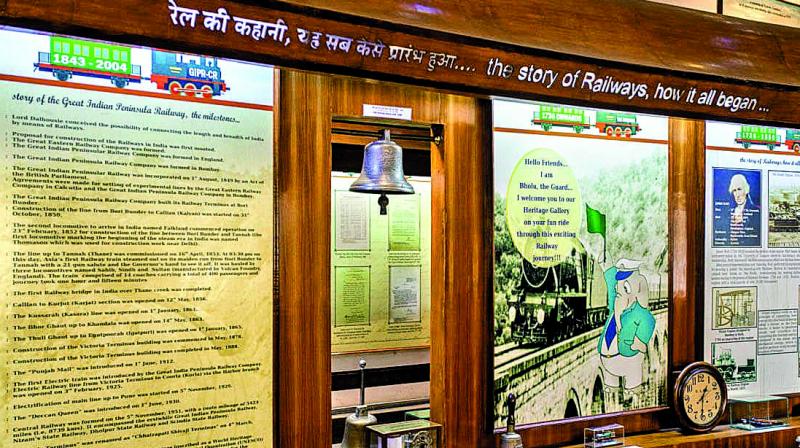 There are miniature models for aficionados, not just of the coaches but also of the entire heritage structure.

Inside the stunning CST building is the Railway Museum, which chronicles the history of the Indian railways. Travel back in time via vintage copies of the Bombay Times, see reproductions of the original design for the building, and explore trains through the miniature models on display.

The red locomotive is the first thing that catches your eye. The nondescript, partially open gate a few feet ahead of Central Railways courtyard merits no special attention from a city on the move. But despite being slave to its schedules for half of one’s life, a quick peek into the glorious railway edifice can halt you in your tracks.

Just past the red locomotive is where the tour to the CSMT Museum begins. The gallery inside chronicles the history of the Indian railways from the inception of the Great Indian Peninsular Railway Company to the first train in 1853 that steamed off from Bori Bunder (CSMT) to Tanneh (Thane) with 400 passengers. Chugging back to the 1900s, the photographs on the walls feature steam engines, electric units, the Punjab Mail to Pakistan, the Calcutta Mail, and the Deccan Queen with its dining car and a “ladies only” coach. There are miniature models for aficionados, not just of the coaches but also of the entire heritage structure.

You can travel back in time via vintage copies of the Bombay Times featuring timetables on the front pages. A first-class ticket to Byculla would cost you a grand sum of six annas; worth it, if you could travel in those coaches, with leather chairs that are straight out of a haughty men’s club, air blue with cigar smoke. You’re introduced to the old-style ticket punching machine and signalling system, which required assistants to punch cards and deliver them to the drivers before the trains could move. 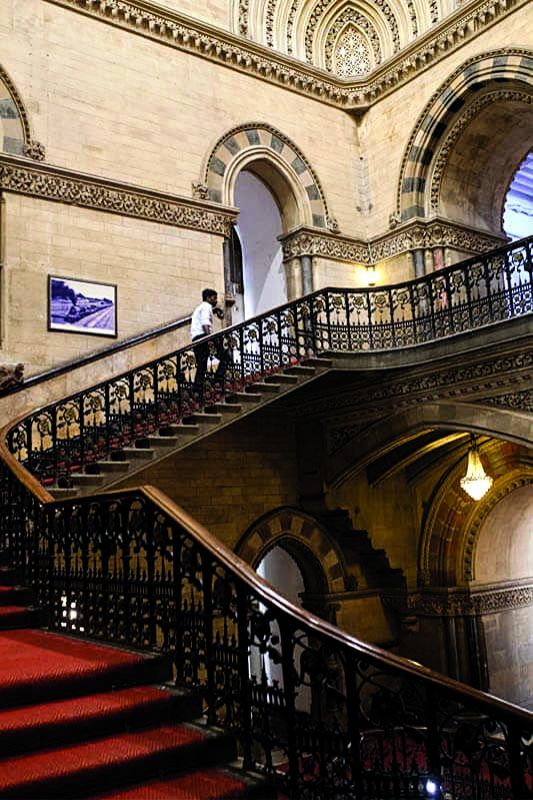 In the glass cabinet are reproductions of Frederick William Stevens’s original design for the building. The Victorian Gothic Revival structure took a decade to construct, and its Italian marble and granite columns, teak wood doors, and grand staircase were recently restored. Its first visitors, when it opened in 1888, would have seen what you see – squinches that carve out an octagon, stained glass, and the magnificent dome. You’ll struggle to capture it all in a single frame, but you’ll keep trying until the guide walks past and you have no option but to play catch up.

On the first floor, the vintage aura dissipates to accommodate the familiar lethargy of government offices. This is, after all, the headquarters of the Central Railways, and the nameplates, whitewashed walls, and sheafs of papers lead you to the Star Chamber and its serpentine queues for tickets. The Italian marble columns are faded here, but the stars on the ceiling still shine bright if you look up from the ATVM machines and ticket booths. It’s a view as beautiful as the one from one of the four porches from where you take in the Capitol, the BMC building, and the eddies of traffic outside.

Behind the walls made of sandstone brought from Porbunder in Gujarat is the peacock arch that is festooned with grotesques. In this version of Fantastic Beasts and Where to Find Them, rendered in stone, you’ll find rats, alligators, snakes, and eagles. There’s a lion playing catch and an owl peering over the courtyard. Pastoral elements show up as well; roses, grape vines, and flowers drape over the arches. 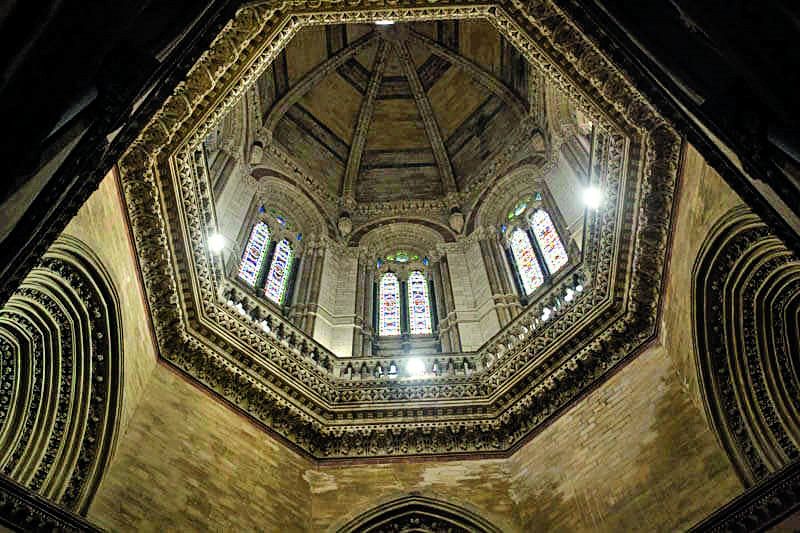 We walk up to the second floor still trying to capture that incredible dome, but this is a great vantage point to see the Lady of Progress atop the dome outside, a torch in one hand and a wheel in another. There’s also the gryphon to ward off evil. You’ll also find the old statue of Queen Victoria, dethroned after the terminus was renamed in honour of the Maratha ruler Shivaji in 1996. When you walk back down to the courtyard, your back to the selfie taking tourists, you will find the bas-relief portraits of founders, directors and important personnel, among them J. Shankarseth and J. Jejeebhoy.

The entire structure is a confluence of British and Indian aesthetic and symbolism. A tiger (for India) and a lion (for British) stand guard at the gate, and the coat of arms features an elephant along with the British flag. The left facade also bears small portraits representing 16 different Indian communities. The closer you look, the more you’re likely to find, each nook a rabbit hole to new references.

As with the bustle of the terminus, the guided tour of its interiors entails being scuttled around up and down, plied with rushed anecdotes, without much pause for soaking in the atmosphere.

Change tracks, linger on after the tour, and retrace the trail once again to really appreciate what you’ve seen. Then you can walk into the Star Chamber and become part of the unseeing crowd again.

—The guided tour runs from Monday to Friday 2 p.m. to 6 p.m. Last tickets are available at 5 p.m. Entry is Rs 200 per person. At Chhatrapati Shivaji Terminus, Fort