Sushma Swaraj emerges as the tragic queen in this episode after being mauled by bakhts. 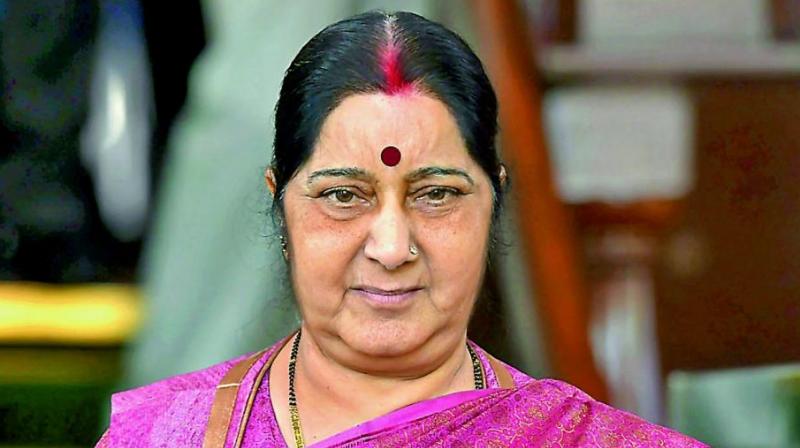 The foreign minister Sushma Swaraj may be known as the ‘Twitter Minister’ as she is known to respond quickly to SOS calls on social media platforms. She may, however, have experienced the worst of the world of Twitter as she was trolled by BJP bakhts for taking up the case of an inter-faith couple who were nastily handled by a passport officer in Lucknow. That a woman who is a RSS favourite and senior BJP minister could be viciously attacked like this, including dragging in her kidney donor, says a lot about the vagaries of running a Twitter handle. 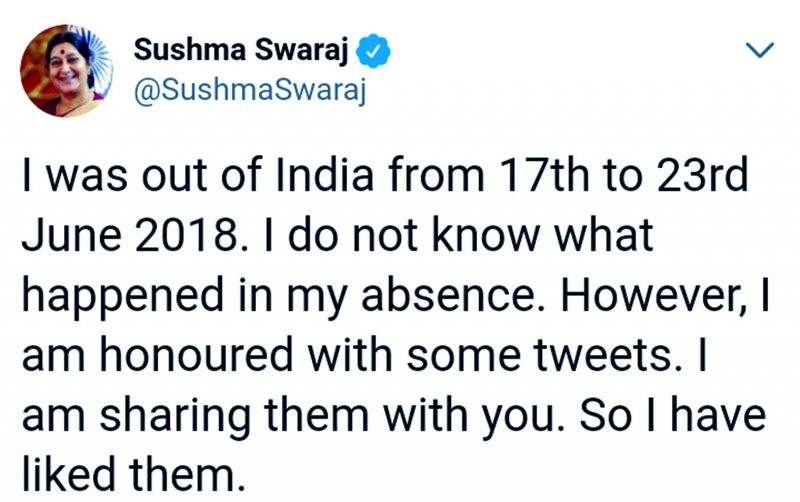 The passport officer erred in discriminating against Tanvi Seth and her husband Anas Siddiqui and making comments about religion that were not warranted. He should have examined the facts of the case instead of making a facetious comment about the hubby needing to change his faith. The couple themselves may have made questionable declarations regarding their place of stay but these are routine matters to be handled by the passport kendras and the home ministry which verifies the antecedents of applicants. The last word has not been said on the case yet but it has become sensationalised because it involves different communities. Sushma handled the matter with great dignity, never losing her cool although she is reported to be hands-on on her Twitter handle unlike many celebrities who fork out the task to others. Her record in dealing with the affairs of overseas Indians has been impeccable. She emerges as the tragic queen in this episode after being mauled by bakhts. More so, as none in her party sprang to her defence. 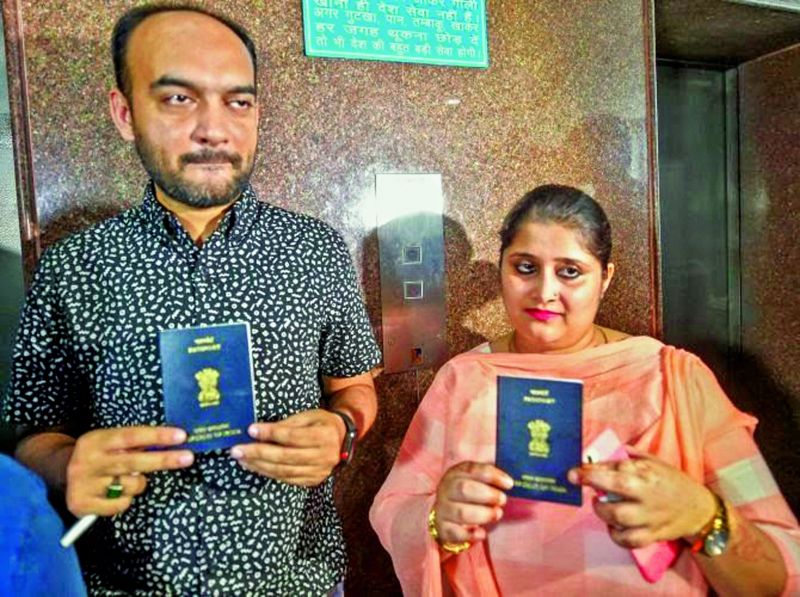 Shreyansi @sshreyansi
Present narrative is that @SushmaSwaraj is labelled as the victim of #passport case,though she was only questioned for the procedure in giving the passport to #TanviAnas aka #shadia . Mam you aren't victim in this case, #VikasMishra is

Sugato Bose @BoseSugato
Sushma ji you have been an incredible leader. However you have jumped the gun in the case of the couple who were issued the passport without due diligence.The police report has come out negative.You must correct this wrong & revoke the suspension of the official

L D Agarwal @LDAgarwal1
Have great respect for Sushma Swaraj ! However, in case she has interfered in the Lucknow passport case, this should not have been done ! It will give a wrong message to bureaucrats and embolden communal elements in country to use such techniques in future !

Congress@INCIndia
No matter the situation or reason, nothing calls for threats of violence, disrespect & abuse. @SushmaSwarajji, we applaud your decision to call out the heinous trolls of your own party.https://t.co/qcB0qemRGZ

ShirishBhosale @ShirishBhosale
See what hapenned in the Sushma passport case. Please don't jump the gun because the so called ‘victim’ is Muslim related. Now please praise the honest passport officer.

Manak Gupta @manakgupta
I have also tagged @SushmaSwaraj in my tweets asking for a fair investigation in to the #TanviAnas passport case. Put out #VikasMishra’s version. We all have a right to ask our minister questions and demand justice. But there is no space for abuse or indecent language. NO WAY

Anil Kùmar Mathur @AnilKmarMathur1
She has tweeted on her return from abroad she is unaware of goings on in ministry here during her (link: http://absence.Now) absence.Now she will take cognizance of Tanvi matter,set things right.People should wait,have patience

aroma bhardwaj @BhardwajAroma
BJP came to power bcoz people of India want development not communalism. Such attitude of the party would be the reason for its downfall. Sushma Swaraj has done what was righteously required to be done! She deserves applause not trolls!

Rupa Subramanya@rupasubramanya
This is a coordinated vicious and vile attack against @SushmaSwaraj over an issue she probably had little control. The attacks come from almost entirely Modi and BJP supporters. I very much doubt she’s in charge of transferring a passport officer at her level.

barkha dutt @BDUTT
“You cant keep snakes in your backyard & expect them only to bite your neighbors”: My piece in ??@washingtonpost?? on the Right Wing’s abuse of Sushma Swaraj. Whatever be truth of the passport case; how does it explain the abuse or silence of her colleagues?

Netra Daoo @onlyonenetra
As all supporters were bashing @Sushma Swaraj for #TanviSeth case did you see any Muslim leader or individuals coming to support or praise her as she gave passport so quickly to a muslim lady?
I haven’t seen.
If you have please share..

Rifat Jawaid @RifatJawaid
You expect @narendramodi to take note of it? Some of the tweets @SushmaSwaraj has liked sarcastically are followed by PM. Modi single-handedly has turned India into a hate factory in past 4 years by refusing to unfollow vicious trolls. This suits him politically!

Sadhavi Khosla @sadhavi
Dear Sushma Ji, BJP’s IT cell has turned the social media into a Frankenstein’s monster. It's like that old story — you can’t keep snakes in your backyard and expect them only to bite your opponents. Eventually those snakes are going to turn on and bite their own. Sad reality

Booby prize
Diego Maradona was seen dancing wildly, unveiling a banner of himself and then appearing to fall asleep and when Argentina secured a somewhat fortunate 2-1 victory with a dramatic late winner, cameras focussed on the 57-year-old as he angrily gave the ‘bird’ (the middle finger) to fans below his seat in the stadium’s VIP area. 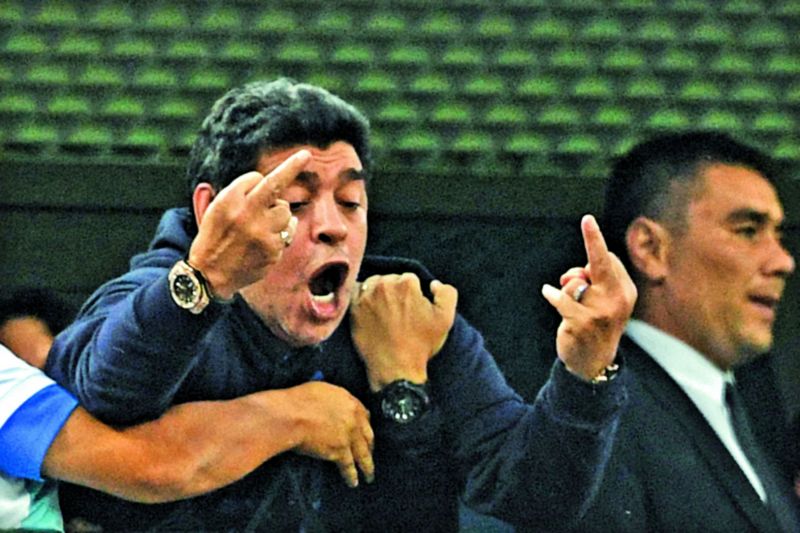 He later blamed “all the white wine” he binged on for his misbehavior. Meanwhile, there were other incidents of fans misbehaving as well.  A pair of English fans was filmed doing Nazi salutes along with anti-Semitic chants at a bar in Russia as the team played their opening match against Tunisia. They have been banned from World Cup matches.