The incident has left the public divided in their opinion, with the majority lauding him for giving Arnab a taste of his own medicine. 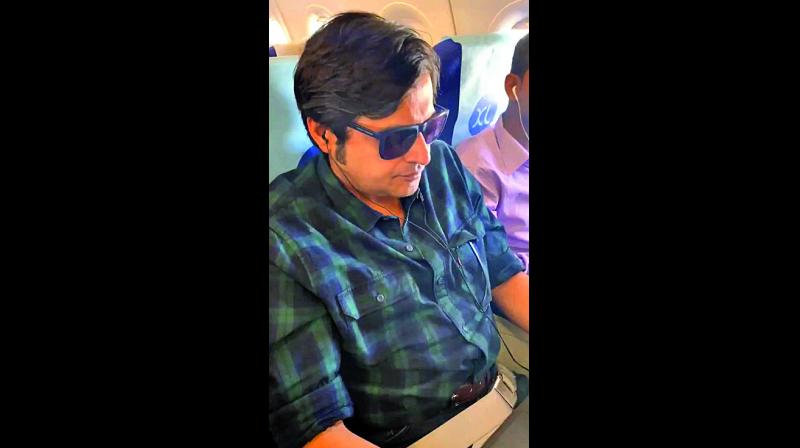 A screen grab from the video Kunal Kamra posted

On Wednesday morning, the nation woke up to a rather amusing interview that saw the usually vociferous Arnab Goswami more silent than a mouse. A one-minute-long video of comedian Kunal Kamra’s repeated attempts to question the famous news anchor on an IndiGo flight, has gone viral.

Parodying the Republic TV journalist’s infamous style of questioning, Kamra in the video questions the anchor about his journalism while he calmly ignores the spiel. “I am part of the tukde-tukde narrative. You should deflate me. Enemies of the state down... Arnab, you should have a reply. Are you a coward, or are you a journalist, or a nationalist? Who are you, Arnab?” the comedian asked him.

Kamra was seemingly undeterred by any potential consequences while asking Goswani hard-hitting questions about discussing Rohit Vemula’s caste on his show, and asked him to read Rohit’s suicide note. “I know this is not allowed, it’s fine... I’ll go to jail for this,” he says.

As a result, not only did IndiGo ban him from taking their flights for six months, other airlines were also advised by Civil Aviation Minister Hardeep Singh Puri to impose similar restrictions. As a result, airlines like Air India and Spice Jet and Go Air have suspended the comedian from using their services.

A controversial move
The incident has left the public divided in their opinion, with the majority lauding him for giving Arnab a taste of his own medicine. “I 100 per cent support Kunal in this. It is much needed. He is putting himself in a situation where you don’t know what will happen next. I have been a guest on Arnab’s show half a dozen times and that is the mode of operation. He is not a journalist, he is an entertainer who is emasculating as a journalist.

We need to call these people out for who they are and what Kamra has done is interesting,” says comedian Karan Talwar.

For Ram Subramanian, founder of Handloom Picture Company, who was one of the first few to support Kamra, calls his video a piece of art. “While Arnab is a well-mannered gentleman off stage, he has to be held responsible for his way on the news platform. It was pertinent that a young man like Kunal stood up and showed Arnab what it feels like when you are at the receiving end. This is the discomfort Arnab puts his guests and what he does is a violation,” he opines.

Karan believes that while the past Goswami satires haven’t worked well this is one will settle with people. “What Kamra has done is like right in your face. Being blunt is needed; it is divisive but it is needed,” he adds.

Comedian Karunesh Talwar finds Kamra’s ban from airlines upsetting, and points out the crass means adopted by the news anchor’s reporters while chasing politicians and bureaucrats. In 2017, a Republic TV reporter insistently questioned RJD politician Tejashwi Yadav on a flight, breaching his privacy, while in another incident, his reporters chased and harassed Congress MP Shashi Tharoor.

“I do not think Arnab has the right to privacy when his reporters breach that privacy all the time. He specifically does not have that right. Kunal has not instated any communal disharmony that happens daily. They are calling him an unstable person attacking Arnab on the flight. Just watch the 9 pm debate on Republic and tell me who is unstable? There is a huge difference in the way Arnab shouts and the way Kamra is putting forth his thoughts,” points out Karunesh.

“He is a great comedian but at the same time, his behaviour — heckling Arnab while the flight was mid-air — is not something I approve of. He might have a difference of opinion, but let’s not fall to the level that we have been subjected to. And we must understand that Arnab does this in a studio environment,” she opines.

“Had he done this before take-off or after landing, it would have made sense. Here you are creating nuisance in the space. His journalism is intrusive and unwelcome, and he has carried it on nevertheless and has come under criticism. However, for people to fall in the same category to teach a lesson, will embolden him to continue behaving in this manner,” she adds.

A double standard
Subramanian believes this move by the airlines only highlights how deeply the aviation industry has succumbed to the government’s rule and live under fear.

“This shows the difference in democracy and right; a common man enjoys versus what a politician enjoys. It is an oppressive system if you are taxpayer, but if you are an elected official you are the God,” says the filmmaker.

To Karunesh this move shows the hypocrisy and the inconsistency in setting precedents.

“Nothing happens when Pragya Thakur disrupts and delays the flight. No action is taken against the Republic TV reporter who heckled Tejashwi Yadav in the flight, and not much was done when Shiv Sena MP Ravindra Gaikwad admitted on camera that he slapped a flight attendant,” the 28-year-old shrugs.

Echoing this sentiment, Chaturvedi points out that the chipping in of aviation minister was excessive. “It shows our priorities and selective measures of punishment,” she explains.

While most believe that this going to be both, a boon and bane for Kamra, many support him for his opinions and thoughts.

“It is surely going to be difficult for him to work now. That is the price you pay for going against the system, especially in this government, that is very vindictive. I support him as there was no violence, and he just stood there and spoke his mind,” concludes Karan.