In love with your Google Assistant? 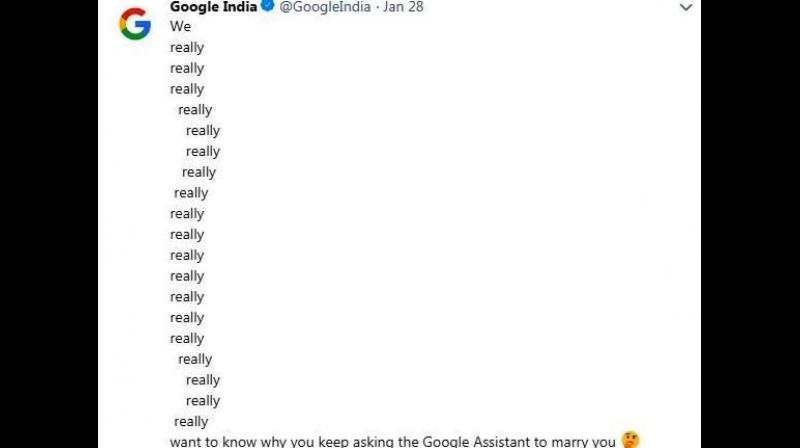 Seems like many Indians find their Google Assistant to be their ideal life companion. (Photo: ANI)

New Delhi: Looking for an eligible companion to marry? Get in the queue because it seems Google assistance is currently the most sought after life partner amongst Indians. It's the season of weddings, and while some are lucky enough to tie the knot with their future partners, seems like others are succumbing to the pressure of getting married.

"We really want to know why you keep asking the Google Assistant to marry you," read the tweet. Responding to Google's query, hilarious reactions poured in the comment section.

Apologising on behalf of all "single guys" out there, a user replied: "I am really sorry that you guys have to deal with single guys like us". Responding to Google's question another user Tweeted, "Because, it can't friend zone me".

Getting a little emotional, a user responded by saying that the reason for Google Assistant’s desirable status was the fact that people are lonely. "Cuz we are lonely, and we can't talk to a real person, plus the assistant lets u down easily while a real person bruises your soul," the user wrote.

With most sought after celebs like Deepika Padukone and Priyanka Chopra happily married, Google Assistant seems to be the next most popular potential life partner in town.