One hundred years of yoga 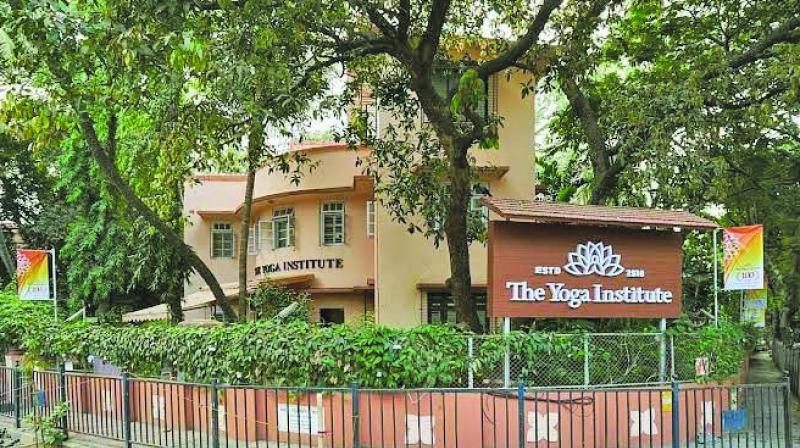 The Yoga Institute in 1918 at Dadabhai Naoroji’s residence in Versova.

In 1916, a young Gujarati man named Mani Haribhai Desai had a chance encounter with a 118 years-old Guru Paramhamsa Madhavadasji who was in the city for a discourse.  The brief meeting was profound enough to inspire the young man to spend his life spreading the ‘secret knowledge of yoga’. With a resolution and dedication so robust, Mani became Yogendra, a fastidious proponent of hatha yoga and established The Yoga Institute in 1918 at Dadabhai Naoroji’s residence in Versova. After years of relocating to different locations, from Chowpatty to even Gujarat, the yoga guru finally laid the bricks of his institution at its present location in Santa Cruz in 1947. At the two-day Harmony Fest that commenced yesterday, an event celebrating the centenary run of the world’s oldest yoga institute, President Ram Nath Kovind joined in the festivities by gracing the occasion.

Yogendra’s daughter-in-law and director of the institute —Hansaji Jayadeva Yogendra —who has made spreading knowledge about yoga her life’s goal, helmed the event. Looking back, she reiterates the long-running objective of the institute when she informs that they have not only focused on yoga as a means to pursue a healthy life, but also as a subject that deals with three aspects —psychology, philosophy and technology. “The psychology part also needs to be understood — when a person is getting angry, what is happening to the system, and when he is calm and quiet, how his brain is functioning then. And in philosophy of course, how he is trying to bring certain aspects in his life so that he can remain calm and balanced. And the technology part is something that has to be very carefully dealt with because every human is very different,” she reveals. She adds that one cannot treat yoga as a mass drill, but since every human being is different, one should follow personalised, tailor-made programs consisting of as
anas, pranayama, meditation, kriyas, bandhas and mudras. “Everybody can’t do meditation, rather it may harm somebody if he is going through depression. We don’t use the word ‘meditation’; rather we use ‘conditioning’ because it is a very different step. You have to condition your mind to see that right types of thoughts go by and you are actively sitting quietly, counting your breath, listening to the sound around you and feeling the air on your body. That would help you,” she elucidates.

The popularity of the institute, the rigorous following of its objectives and its philosophy can be accredited to the years Yogendra’s spent researching the physiological and the psychological effects of practicing the ancient Indian art of living in USA.  In 1943, a team of experts from the Oglethorpe University, Atlanta, who were collecting modern artefacts to add to their time capsule called the Crypt of Civilisation, also added the books published in the institute to their collection, which will only be opened after 6000 years. “I was very glad when the Crypt of Civilisation accepted our books and they gave us a certificate saying that they are the most authentic and scientific books,” Hansaji gushes.

For Hansaji, who has worked towards increasing the participation of women in yoga at a time when it was frowned upon, she feels the practice has come a long way. She extended the ladies wing of the institute and has seen the attitude changing in her customers.  “Earlier ladies didn’t attend in large numbers, they were not allowed. And they also thought that practicing yoga meant you were a recluse of sorts, like a sadhu-sanyasi.  Once a lady came crying to me, saying that her husband will become a sadhu because he is going to a yoga centre. So for a long time, yoga was not understood.  Now, it’s the other way round,” she says. Not only has the participation of women increased, but Hansaji has also started various programs that meet the needs of children, women, including girls in their puberty, women in pre and post-natal stages of pregnancies, women in menopause, and the elderly.

Looking back fondly, Hansaji says that her happiest memory would be the time when she joined Prime Minister Narendra Modi on the first-ever celebration of the Yoga Day on June 21, 2015.  “The whole boost for our institute came when Prime Minister Narendra Modi reached out to us, because we were functioning very silently. He called me on Yoga Day, and I was there with him on stage. It was then that people saw that this institute was very important, and our strength increased from 400-500 people to about 2000 people,” she concludes.

—The Harmony Fest is ongoing at M.M.R.D.A Grounds, BKC