Twenty visually-challenged men and women took to their tandem bicycles to clock in 1,700 km from New Delhi to Mumbai. 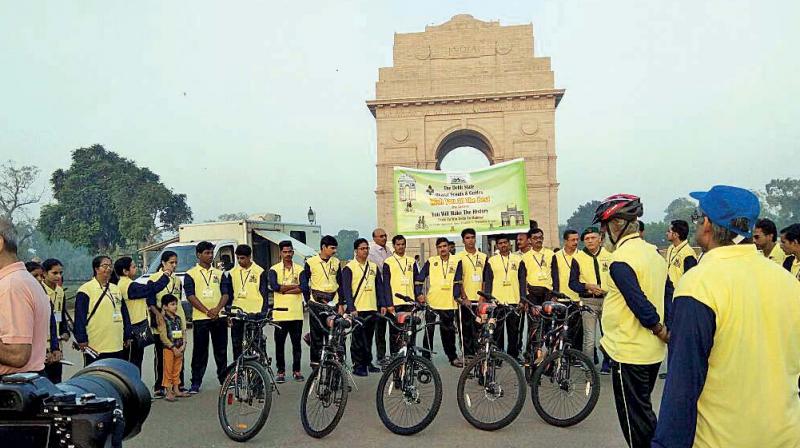 The expedition at its source, India Gate in New Delhi.

Rajesh Dayal has been visually impaired for the last two decades. But even so, he doesn’t let the impairment taint his approach to life. “When I was 20, I fell down from the first floor and apart from the injuries, I immediately took really ill. Gradually, I lost all my eyesight,” he recalls.

Rajesh is one of the twenty visually impaired people to complete a cycling expedition from New Delhi to Mumbai. Covering 1,700 km in the next two weeks, Rajesh was a part of a group of 38 people, out of whom 20 were visually impaired and accompanied by 18 volunteers, who cycled to Mumbai, reaching the city only yesterday.

The initiative was head by Gyanam Ganga, a Mumbai-based NGO, that uses cycling as a medium to create awareness about visual impairment. Dr Rajesh Shukla, who functions as the convener of the organisation and was also one of the volunteers at the expedition, shares how they went about the expedition. “We started on October 15, which is observed as World White Cane Day, educate the world about blindness, all over the world,” he begins. “Our days started early at 8 am, and we aimed at completing 150 km every day to stay on track of our itinerary,” he says. The expedition used tandem bikes, better known as twin bikes, that allow two people to cycle at once with the one in the fore directing the bike. “Each tandem bike was helmed by a volunteer who took the bike forward,” he says.

Dr Rajesh points out that one of the main motives behind going on an expedition like this was to improve confidence for the visually challenged and also the volunteers. “Never in my wildest dreams did I ever imagine going on a cycling expedition like this. As a senior citizen, I can proudly say that I volunteered for such a cause,” he says.

Rajesh, 40, is pursuing his graduation from Nirmala Niketan today. “The accident didn’t really complete my studies. So, I am back to it today,” he says. He acts coordinator for training sessions that they hold all around the city and calls the two-week long expedition an adventure of a lifetime. “The disability, obviously, confined me. But during this expedition, when I was on the bike, I felt free; like anything was possible,” he beams. This is his first ever cycling expedition.

The troupe followed quintessential methods for spreading awareness — conducted street plays, visited schools, organised talks, and the likes. Mansi Choudhary, 18, was in charge of the street plays. “We conducted street plays at every city that was our pit stop,” she begins. A student of Narsee Monjee College, Mansi is partially impaired, Mansi is pretty well-versed with the information programme. “We follow a simple module. We share information with respect to prevention, cure and rehabilitation,” she explains.

Even as the expedition has come to an end, it has left all the participants, including the volunteers hoping for more. Rajesh is really excited for their next expedition. “We plan to conquer 2020 with a sea voyage from Sri Lanka to Mumbai,” he says excitedly.