The city of gold is what they call Banaras, and for good reason. 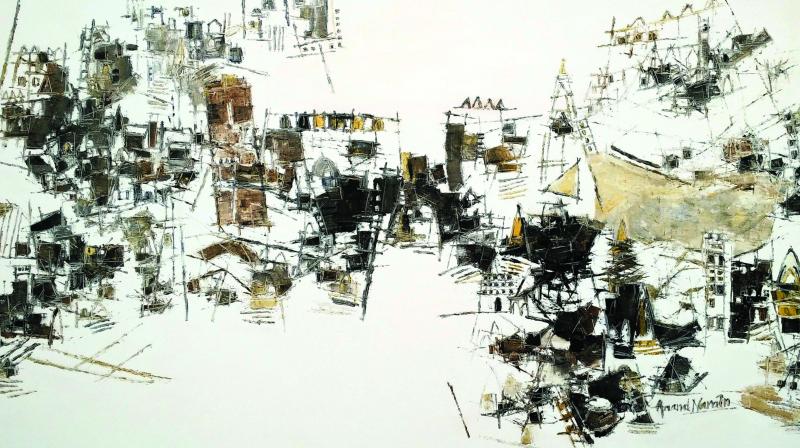 Anand Narain’s artwork has the characteristic markings of the spatula that has been used instead of the paintbrush. The abstract figures, thus, appear more three-dimensional.

While the golden city of Banaras (now known as Varanasi), has often been captured on celluloid, there are not as many scenes and sights of the place that have been represented on canvas.

In order to rectify the imbalance, an exhibition titled ‘The Spiritual Gold - Banaras’ saw the divinity of the place being showcased in the physical realm. The exhibition, organised at the India International Centre, displayed paintings by artist Anand Narain.

The works were created using the oil on canvas method, but with a twist; instead of using a brush, a spatula has been used.

Anand explains his choice of using Banaras as a subject, saying, “I try to paint the atmosphere that is over there. It is an effort to preserve the purity of Banaras. There is nothing like these beauties.” There is a significant use of the colour gold, which signifies the richness of the city.

He did find challenges in coming up with the artwork. “There is no single artist that has not been inspired by Banaras and neither are there any artists who haven’t painted Banaras,” he says. To him, the difficulty was doing the task differently from them.

Despite the paintings being abstract, there is more than what meets the eye. These works go far beyond the canvas as there is a deep philosophical message that resides in them. Anand explains, “The motive (of his work) is to create not just a painting but evoke an atmosphere, an aura through which people can feel as if they were experiencing the city.”

When asked about why were spatulas used in these paintings, he replies, “Spatulas are a not-so-widely-used rich tool for abstracts. The use of spatula is central to my work as an artist.” He then adds, “Generally, artists use it only for mixing colours while I use it to paint. I like working with this tool as it gives the painting a 3D effect and the pigmentation that results is very dramatic and appealing.”

One of the aspects worth noticing is the use of colours. In some, there may be many colours used. But in some of the paintings, there are few colours being used. “It all depends on the mood; it continuously changes. I paint like I am talking to someone. There is simplicity in my work,” he explains.