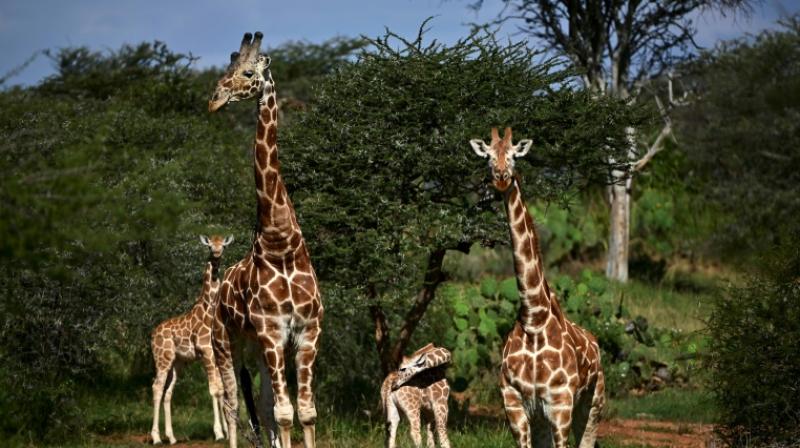 The African giraffe has been the most hard-hit by habitat loss. (Photo: AFP)

Africa: A global wildlife summit has decided to regulate trade in giraffes and tighten protections for endangered animals including elephants, triggering a threat from disgruntled southern African nations to leave an international treaty.

Parties to the Convention on International Trade in Endangered Species (CITES) wrapped up a 12-day meeting in Geneva on Wednesday after approving a long list of proposals to tighten protections. The treaty, created more than four decades ago, regulates trade in some 36,000 species of plants and animals and provides mechanisms to help crack down on illegal trade and sanction countries that break the rules.

The sense of urgency was palpable at the conference against the backdrop of fires raging in the Amazon and following UN warnings in May that climate change, habitat loss and other factors are pushing one million species to the brink of extinction.

"Humanity needs to respond to the growing extinction crisis by transforming the way we manage the world's wild animals and plants," CITES Secretary-General Ivonne Higuero said at the close of the conference. The delegates from more than 180 countries appeared to have heeded her call, with 139 species either listed for the first time or given stronger protections.

"The world is waking up to the reality that we are at a turning point for saving our planet’s wildlife," said Jeffrey Flocken, president of Humane Society International, noting that countries "seem to be shifting their focus from exploiting animals to protecting them." At the conference, giraffes were listed for the first time in CITES Annex II, thus requiring tracking and regulation of trade, after fears the gentle giants are facing a "silent extinction".

The African giraffe population has shrunk by an estimated 40 per cent over the past three decades to just under 100,000 animals, according to figures available to the International Union for Conservation of Nature (IUCN).

Giraffes have been especially hard-hit by habitat loss, but with their vote, the delegates acknowledged that international trade in skins, horns and bones are contributing to their decline. But the proposal met stiff resistance from the southern African region, where giraffe populations are healthier and have traditionally been better protected.

Southern African countries also voiced frustration at a number of decisions involving African elephants, including a near ban on sending elephants caught in the wild from the continent to zoos. Zimbabwe, a major provider of wild-caught baby elephants to facilities in China, attempted in vain to block a vote on the issue by invoking a mechanism never before used in CITES's four-decade history.

Zimbabwe's President Emmerson Mnangagwa also lambasted the CITES conference's rejection of a request by a number of countries in southern Africa to sell their stockpiles of ivory. Global trade in elephant ivory has largely been outlawed since 1989 after their numbers plunged, falling from millions in the mid-20th century to an estimated 415,000 in 2015.

But countries in southern Africa, where populations are considered healthy and well-protected, argue they should be allowed to sell stockpiles to help fund conservation efforts. Speaking on behalf of 10 southern African countries, Tanzania's representative warned Wednesday that they might withdraw from CITES. "Time has come to seriously reconsider whether there are any meaningful benefits from our membership to CITES," he said.

Such a scenario "is of great concern to me," Higuero told reporters, saying she regretted that some countries felt their arguments were not being heard, but insisting that "to leave is not the solution.” In another controversial move, delegates in Geneva also decided to list 18 species of rays and sharks, including the mako -- the fastest shark in the ocean -- in Annex II.

The delegates also decided to significantly tighten protections for a number of species already on the CITES radar. For example they opted to strengthen protections of two endangered species of Asian otters that have come increasingly under pressure after a social media-fuelled craze for acquiring the silky mammals as pets.

The Asian small-clawed otter and the smooth-coated otter were both moved from Annex II to Annex I, meaning all international trade will be banned. The same was true for a number of other species under pressure from the exotic pet trade, including the Indian star tortoise and several turtle and lizard species.

The conference also upped the pressure on Mexico to rein in illegal fishing that could rapidly doom the critically endangered vaquita marina porpoise to extinction, hinting that trade sanctions could be on the table if more is not done in the coming year.

Conservationists widely hailed the conference for tightening protections for a long list of species. But Susan Lieberman of the Wildlife Conservation Society acknowledged that providing more CITES protections to species was a "bittersweet success.” “It means that more and more species are threatened or endangered," she said in a statement.