What was extraordinary, though, was the lyrical content of the songs — ranging from buying land in Kashmir to marrying Kashmiri women. 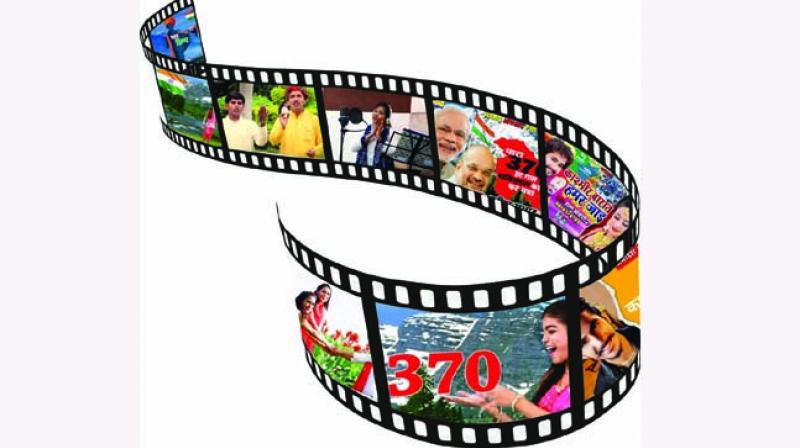 Now being called ‘patriotism pop’, this genre of songs started trickling out as soon as the announcement to repeal Article 370 appeared.

Within days of the government’s decision to scrap Article 370, a vast array of music videos began appearing online, which reveal disturbing sentiments that many Indians hold about Kashmir.

Music has always been society’s way to express emotions and opinions on almost any topic on the surface of the earth. Be it a Despacito or Gangnam Style, these songs get incredibly popular because of their universal connect, along with a hint of entertainment. So, when songs on the abrogation of Article 370 started getting released on the Internet, it was nothing out of the ordinary. What was extraordinary, though, was the lyrical content of the songs — ranging from buying land in Kashmir to marrying Kashmiri women.

Now being called ‘patriotism pop’, this genre of songs started trickling out as soon as the announcement to repeal Article 370 appeared. Viral on platforms like TikTok and YouTube, this music has a tinge of right-wing ideology to it along with a dash of nationalism. Various singers can be seen in these videos with shoddily edited shots of Kashmir in the background and poorly lip-synced visuals, singing in Bhojpuri and Hariyanvi about how they can now venture into the Muslim-majority land of Kashmir, buy land there, and also marry ‘fair’ Kashmiri women. Some songs also thank Prime Minister Modi and his government for keeping his promise to remove Article 370 from the constitution. While one such song by Praveen Samrat (Dhara 370 hatt gaya, Pakistan ka phat gaya) considers this move as Pakistan’s defeat to India.

Sallu Khesari, an artists who sang a patriotism pop song about a man seeking a bride from Kashmir (Kashmir me baraat humre jai), says, “I was very happy as a man from North India to hear the news of Article 370 and decided to sing the song. I never expected it to be such a hit.” Khesari, whose phone hasn’t stopped ringing since the video emerged, seems to be unaware of how people, especially women, might find it problematic. “I have been receiving a lot of support and the video is also popular now. Why would I mean to hurt anyone’s sentiments? I just wanted to express my happiness through this song,” justifies Khesari. A comment below his songs reads, “What’s wrong with marrying a Kashmiri woman? This is a love song and people should treat it like that.”

The immense popularity of the songs, however, only points towards the stereotypes that the mainstream Indian citizens still have regarding life in Kashmir. “Amidst the crass cacophony of news anchors and the hot takes about the positives Article 370 will bring, what curled my toes in anger was the inherent misogyny around Kashmiri women and an insatiable lust for a piece for land for retirement homes/summer retreats,” expresses Rupam Bhatt, a Kashmiri student on being asked about these songs.

Bhatt believes that the bottom line is, however, worse than what can be seen on social media. “Twitter and most of social media were bombarded with this doleful lust for the ‘fair-skinned, almond-eyed, blond-haired’ women from the ‘paradise’. A colleague even went on to say how he’d love to do chatt puja in the Dal. Another about how his parents always wanted a summer retreat for themselves. An auto-wallah, who hadn’t paid his rent for the last three months, told me how he’d love to have a quaint little house in the hills, with ‘kaliyo ke nazare’ (vistas of buds),” recalls Bhatt.

According to laws under Section 370, it was never prohibited for men of other states to marry Kashmiri women. Only property inheritance rights for women have been now granted. But, as the idea of consent remains alien to most, women all over the country feel humiliated over these songs. “I think women are always used as tools of subjugation and as spoils of war. I think it is a way to tell Muslims, especially Kashmiri Muslims, that your women are now our property equally,” says Sahiba Jeelani, a Delhi based law professor who hails from Kashmir. Portraying a similar sentiment, Aroshi Handu, a travel writer, chimes in, “I don’t think anybody can be calm after hearing all these sexist and racist songs. And when I say anybody, I mean women from not only Kashmir but from everywhere. These lyrics fetishise Kashmiri women.”

While sexism is not limited to men outside Kashmir, the songs show the problematic sentiments that Indian men belonging outside Kashmir hold. “I mean what are they trying to say here? Indian girls are not pretty because they are dark-complexioned? I can’t believe that the objectification of women is being celebrated and defended like this,” fumes Jeelani.

At least 50 patriotism pop songs on Kashmir are currently doing rounds on the Internet. The views on these videos range from 5 million to 14 million. While the artists claim that their business is ‘booming’, some believe this to be the ‘slow poisoning’ of India’s image towards Kashmir.