‘Dele Alli’ is an English professional footballer who plays for Premier League club Tottenham Hotspur and the England national team. 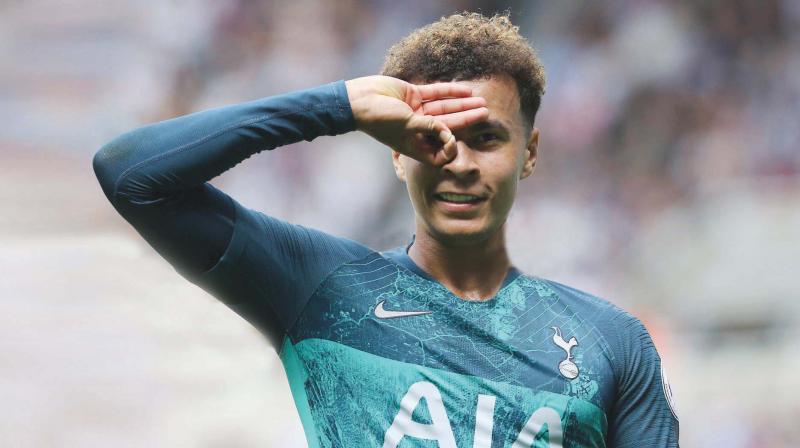 The ‘Dele Alli’ challenge is the latest addition to the list of challenges that have gone viral this year.

‘Dele Alli’ is an English professional footballer who plays for Premier League club Tottenham Hotspur and the England national team. Dele Alli’s hand challenge is the internet’s new trend. The challenge which is inspired by him represents the hand move done by the footballer after he scores a goal. Users across social media platforms are warming up to this new challenge, referred to as ‘Dele Alli’s hand challenge’. The challenge went viral after Alli, on August 12, uploaded a picture of himself doing the hand move on Instagram. The post received 1.2 million likes and recorded over 22,000 comments in a short span of time. The Dele Alli challenge joins a long list of challenges that proved to be a major craze this year.

“Whether it is the bucket challenge, selfie challenge or any other challenge, 2018 has been absolutely loaded with mundane little challenges that people are doing to go viral. One of the more recent ones has come from across the pond: The Dele Alli Challenge 2.0. This challenge has people twisting their fingers to outline their eyes. If you look it up in the dictionary, it will probably redirect you to ‘sorcery’. People follow such acts to grab the attention of others, thus creating a cool quotient. In today’s era of technology, anything goes viral with just one click and these activities are the best thing to become popular and gain fame. These activities grab people’s attention because they are either different or done by a known personality,” says Ravneet Gandhok, life coach.

Many are addicted to these challenges as a means to become famous on social media. “This is the world of hashtags. An eye-catching hashtag, associated with a spectacular imagery, can make any post go viral. And this is what the users are craving for. This spectacle creation and the user urge to be the first to associate with the spectacular is the reason behind the race to continuously attempt manufacturing bigger and better performances. The haloed social media democratisation process has unfortunately resulted in a significantly shortened (life cycle of) struggle behind success. Once, budding stars would struggle for years to be recognised. But today, social media is providing an (almost) equal and instantaneous opportunity for users to be part of (each and every) spectacle in the hope of achieving viral stardom,” opines Nakshatra Pachauri, social media expert

“Yet like a shooting star, unfortunately such social media virality doesn’t last too long either. One spectacle (#kikichallenge) gets quickly trumped by another (#dele alli challenge) and this spectacle hopping continues. The convenience conscious users are beginning to realise that instead of creating a new spectacle each time, it’s much easier to utilise the celebrity quotient of a hashtag by simply imitating and thereby riding the ongoing virality. Whether the user imitation is good or bad is increasingly becoming irrelevant as users are aware that the hashtag world would certainly lap up their best or worst performances catapulting them to the next orbit anyhow. Today’s narcissistic user only marvels at their own image, simultaneously pondering: ‘Hashtag Hashtag on my wall, would this post make me the most famous of them all?’” he adds.

In today’s age and times, much of life is lived out on social media. Hence, a trend or a video goes viral at the drop of a hat. “Usually these challenges are done for fun and no harm is caused to anybody, but it does increase people’s dependency and madness to be on social media sites. People consider these challenges to be cool and can go to any extent to do it,” says Anamika Yaduvanshi, life coach.

Social media expert Raju Singh Rathore feels, “We live in the era of social media, an era where people want a new every moment of their life. The social media has created a great void in their lives and this void can only be filled with continuous feed of thrill and excitement. Presently this excitement feed are these challenges that social media offers. In social media like smviews.com we all are ‘connected’ so instantly, it goes viral and becomes more of a obligation to perform these challenges. So today it’s ‘Dele Alli challenge’, tomorrow God only knows what waits for the world to go crazy.”

“Such videos on social media get instant astounding attention and followers who are all ready to accept the challenge, especially adolescents and teens, as they have risk-taking tendencies because of the hormonal changes during puberty. They are at a fragile stage where they love being centre of attention and want that cool, yo-man titles in their kitty. Many a times they are not able to judge the line that demarcates the safe-zone from the territory of danger. Hence, to avoid any unfortunate incident resulting from bizarre challenges, parents, educational institutes, counselors, coaches need to come up with a platform where without being biased or judgemental they have healthy conversations and are able to guide these young adults in the right direction in a right way,” says Kavita Yadav, a counseling expert.