Various city beaches are on the verge of getting revamped in next 18 months, meet the changemakers. 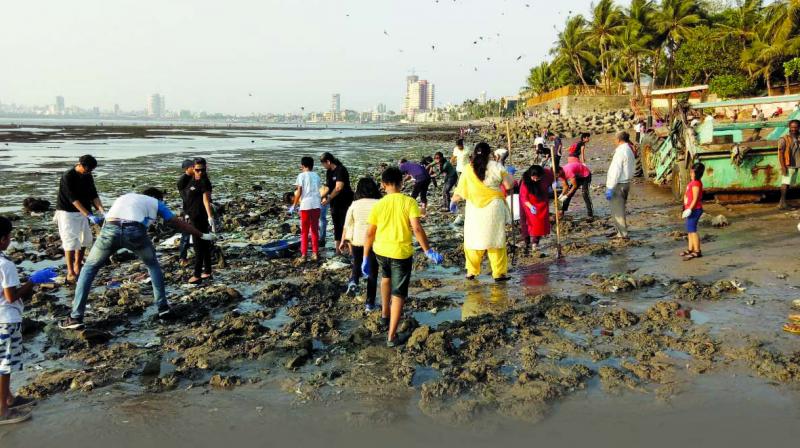 “Suryavanshi Hall side is the only side left with soft sand in that (Dadar-Mahim beach) three km stretch.

The Maximum City’s fight for cleaner beaches is not to slow down. While we have Afroz Shah single-handedly taking charge of Versova beach, and not stopping till achieving his goal, his determination has become a source of inspiration for other such initiatives that have popped up across the city. Riding on this wave of inspiration, United Way, a city NGO has tied up with four such beach clean-up community initiatives, to perform an arduous task of cleaning up four city beaches everyday for 18 months.

Jay Foundation, Mahim Beach Clean Up, Versova Beach Clean Up and Beach Please are part of the NGO’s campaign called ‘Clean Shores Mumbai’, which was launched on June 23.  The purpose of the initiative, as told by Ajay Govale, the director of Community Impact at United Way, is to enhance the cleanliness of the adopted beaches of Chaitya Bhoomi, Suryavanshi Hall lane, Mahim and Versova. “We have a provision to deploy three sweepers per beach, who will be cleaning the beach everyday for eight hours; segregate the waste collected and recyclable waste will be sent to recycling facilities,” said Ajay. Moreover, providing tools for waste management and improving the aesthetics of the beaches are also part of the campaign. “One of the reasons why the beaches are left to this state is because there is no special effort made to make these beaches attractive. They are left to their own destiny. We want to make an extra conscious effort to make the beaches look attractive and inviting,” said Ajay.

Talking about the association, Indranil Sengupta, the founder of Mahim Beach Clean Up, said “Mobilising volunteers becomes a problem so when United Way comes in, it helps in mobilising volunteers because they are constantly in touch with corporates to participate in the clean up. That helps in a big way.” Ajay also believes that mobilising volunteers is the most effective way of sensitising the Mumbai population about ocean pollution. “Make them see, touch, collect the waste with their hands—they will see helmet shells, syringes, plastic bags, school bags, clothes and all other kinds of waste. This is really important,” said Ajay.

Jay and Indranil both agree on the reckless garbage disposal in Mithi River, which flows from Powai and joins Mahim creek, as the main reason behind the accumulation of plastic on the beaches. “Unless the government makes a conscious effort to clean the Mithi River or put a filtration system in the river, we will still have a lot of garbage coming to the Mahim beach and more so during the rains because the sea does not keep any garbage in it.” Nevertheless, the launch of this campaign; the statewide ban on plastic; and the result of their own individual ventures have made them confident of seeing an improvement in the condition of the beaches.

“Suryavanshi Hall side is the only side left with soft sand in that (Dadar-Mahim beach) three km stretch. We want that side to remain beautiful. We used to go to that beach as kids to play football and cricket, but now all the charm is lost because the plastic influx has increased so much that all we see is plastic now. We want to get that back,” Jay added.

The Brihanmumbai Municipal Corporation (BMC) is all thumbs up for this campaign and is even providing transport assistance of on-site compactors and loaders. Talking about supporting the initiative, Ashok G. Khairnar, the Assistant Municipal Commissioner of G/ North said, “We are supporting the initiative because we are confident of the result and the special focus given to the weekends by these organisations will be really helpful.”