British royals to move out of Buckingham Palace wing for repairs

News of renovations was revealed by royal aides as they gave details of “Sovereign Grant”. 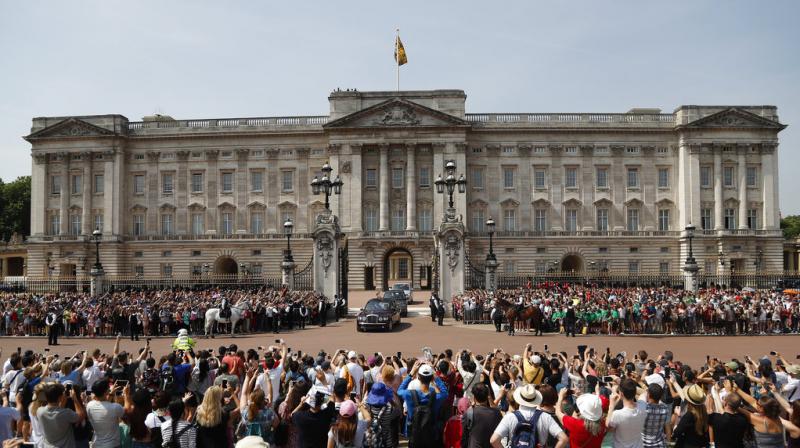 The royal household will “decant” from the east wing of the palace, the public facade which houses the balcony on which Queen Elizabeth and her family appear for significant events, as part a program of urgent work to replace aging electrical wiring and heating systems. (Photo: AP)

London: Britain’s royal family are to move out of the famous front wing of London’s Buckingham Palace later this year as part of a multi-million pound building repair project, palace aides said on Thursday.

The royal household will “decant” from the east wing of the palace, the public facade which houses the balcony on which Queen Elizabeth and her family appear for significant events, as part a program of urgent work to replace aging electrical wiring and heating systems.

“In terms of the outward appearance of the front of the palace I think that people will notice very little change,” said a palace spokesman, adding there would be no need for scaffolding.

News of the renovations was revealed by royal aides as they gave details of the “Sovereign Grant”, the annual government handout that covers staffing costs, upkeep of royal palaces and travel expenses.

The grant is based on 15 percent of surplus revenue from the Crown Estate, a property portfolio belonging to the monarchy, from two years previously. In 2016, this percentage was raised to 25 percent for a decade to pay for the overhaul of Buckingham Palace.

That meant the royals received 76.1 million pounds for 2017-18 and next year will get 82.2 million pounds. Michael Stevens, the queen’s treasurer, known as Keeper of the Privy Purse, said the cost of the monarchy to every Briton last year equated to 69 pence, up four pence from last year.

Buckingham Palace was originally a large house townhouse built in 1703 and acquired by George III in 1761. It was extended in the reign of Queen Victoria while the front was refaced in 1914 when George V was king.

The emptying of the east wing will mean the queen’s children Princess Anne, Prince Andrew and Prince Edward moving their offices, while Andrew and Edward, who also have overnight rooms in the wing, will have to be found accommodation elsewhere in the palace.

It will not directly affect the 92-year-old monarch and her husband Prince Philip, 97, whose private apartments are located in the north wing, nor heir-to-the-throne Prince Charles whose London home is Clarence House.

However, 10,000 items including paintings and other works of art will have to be moved, put in storage or sent out on loan while 120 members of staff are being relocated.

Anti-monarchy republicans in Britain say the true cost of the royals to taxpayers is at least 345 million pounds a year because some items such as security are ignored. Meanwhile newspapers have often been critical of the amount spent on minor royals and travel expenses.

This year’s report revealed that by far the biggest travel expense was incurred by Prince Charles and his wife Camilla whose trip to India, Singapore, Malaysia and Brunei amounted to 362,149 pounds.