Hyperloop India, a think tank with students from business and engineering schools in India, is all set to impress none other than Elon Musk’s SpaceX! 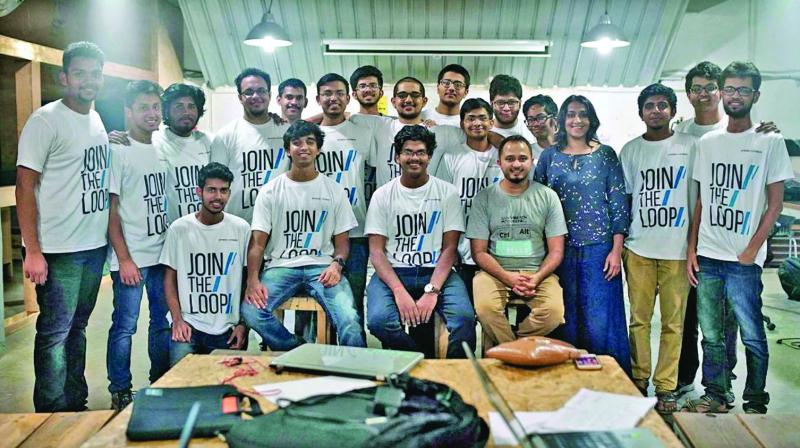 The team behind Hyperloop India

Imagine transport at the speed of an airplane, with the capacity of a train, but at the price of a bus ticket! Totally a dream-come-true, right? With a desire to reinvent transportation in the country, not-for-profit trust Hyperloop India, a multi-disciplinary think tank that originated in August 2015, backed by Invest India and incubated by MapmyIndia, is gearing up for the final lap of a prestigious event organised by Elon Musk’s SpaceX.

To explain in detail, The Hyperloop, which is a high-speed transportation system, is an ambitious and exciting idea proposed by inventor and tech guru Musk. To aid its development, SpaceX announced an (open) competition for student engineering teams to design their own Hyperloop pods to compete on a test track.

From being the only fully-funded Indian team among the ones selected from around the globe to present their design (OrcaPod) at the 2016 SpaceX Hyperloop Design Weekend, and eventually the first and only Indian team (among 24 finalists) to receive approvals on the Final Design Report by SpaceX, it has now expanded to a team comprising of the best minds from the top engineering and B-Schools of the country — namely BITS Pilani University, Indian School of Business and IIM Ahmedabad. they are also supported and mentored by transportation, logistics, infrastructure and data experts from organisations like Hyperloop One, MapmyIndia, SKF, Startup India, Invest India, Workbench Projects, RITES, Jindal Aluminium, Peenya Industries Association, NITI Aayog, Ripple Technologies and DP World India.

We speak to the team members as they give us insight about the competition, and the challenges they face.

Team leader, Sibesh Kar, starts the conversation on a positive note. “It’s nothing short of an honour (representing India in the finals). Of course, we’d like to keep our heads low and work towards the task in hand — which is making the OrcaPod, which is of utmost priority — before anything else.”

He also asserts, “I’m pretty sure when the OrcaPod levitates and runs in that one-mile long tube in California, it’s going to be a matter of pride for the whole nation.”

Speaking about the inspiration behind forming this team and how it has evolved over the years, a member from the team says, “Sibesh realised during the previous SpaceX Pod competition that there was no representation from India — it really disturbed him. That’s how the idea of Hyperloop India was constructed at BITS Pilani.”

As part of gruelling procedure, there was initially a registration of 1,200 teams to present their team structure and future step-wise plans, out of which 120 teams were shortlisted to present the Final Design Report to SpaceX, from which 24 teams were shortlisted to build their pod for the finale at SpaceX this August. Every technological aspect was inspected and thoroughly questioned by SpaceX.

Sharing with us insight on the technical features of OrcaPod, another team member explains, “It’s symmetric (unlike other pod designs), it has a nose-loading system, unlike the mid-body loading in other pods — this helps in efficiency of space because you don’t need to turn the pod around the station to load the cargo. It’s expected to travel at approximately 400 kmph.”

Any challenges? “When you type ‘How to build a Hyperloop?’ in Google, you get no results — that has by far been one of the biggest challenges! Everything has been built right from scratch using various concepts, under the roof of science. Another key aspect which add to the difficulty, is making this technology responsibly — keeping in mind the safety factor,” he says.

With regards to funding, Hussain Harianawala from the marketing team states, “As far as the business development and marketing for Hyperloop in India is concerned, it is quite tricky. People either don’t know about this, or feel it’s too superficial or want the Hyperloop to emerge before them as soon as they fund the project. Marketing a concept like the Hyperloop is a huge responsibility.”

Hyperloop India has also partnered with crowdfunding platform Ketto for generating money to build the pod prototype. The target of the team is to generate Rs 30,00,000 in 30 days and they have raised around Rs 3.3 lakh so far.