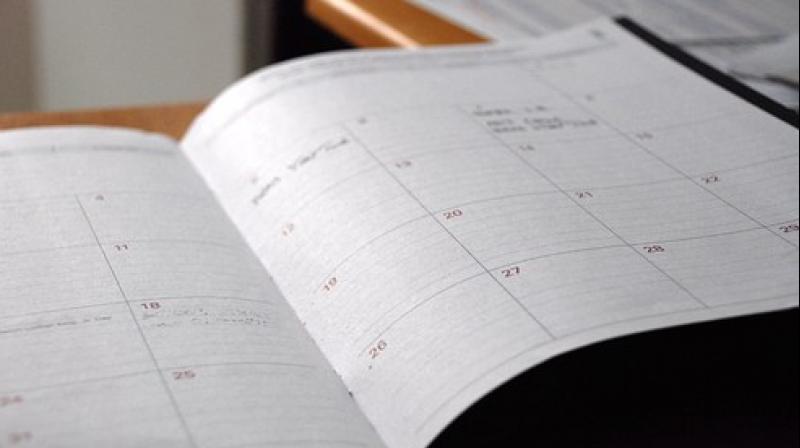 We feel that if we have a meeting in two hours, we shouldn't work on any big projects. (Photo: Pixabay)

Free time seems shorter when it comes just before an appointment, say scientists who found that an upcoming task makes us less productive.

"We seem to take a mental tax out of our time right before an appointment," said Selin Malkoc, associate professor at Ohio State University in the US.

"We figure something might come up, we might need some extra time, even when there's no need to do that. As a result, we do less with the available time," said Malkoc.

In an online study of 198 people, researchers asked some participants to imagine they had a friend coming over to visit in one hour and "you are all ready for your friend to come by." The others were told that they had no plans for the evening.

"Regardless of whether they had a friend coming by or not, participants said that they objectively had about 50 minutes available to read," Malkoc said.

"Most people didn't think even objectively they had a full hour to read. People are putting a little 'just-in-case' time into their schedules when there is no real reason to do that," he said.

When they were asked how much time they felt they had to read - the subjective measurement - those with a friend coming by felt that they had 10 more minutes missing in their hour - about 40 minutes. The results held up in real-life studies as well.

The researchers asked participants to provide their actual schedules for the next day. Participants indicated when each scheduled task on their calendar would begin and how much time they would need before each task to prepare.

For some participants, the study was scheduled in the one hour before they said they had to start getting ready for their next appointment. The others were not scheduled up against another of their appointments.

Even though they had plenty of time to finish the 45-minute study, participants who had an appointment in an hour were significantly more likely than the others to choose the 30-minute study instead of the 45-minute version.

People also seem to get more done when they do not have a scheduled task hanging over their heads, the researchers found.

In a study of 158 college students, a researcher told participants when they arrived at the lab that study sessions were running faster than expected so she wanted to wait to see if more participants arrived.

Some participants were reminded that they had a task coming up soon: They were told "they had about five minutes before we could get started. You can do whatever you want before we will get started."

Others weren't reminded about their upcoming task and were simply told "they had about five minutes to do whatever you want."

After the time had passed, all participants wrote down what they did during the five-minute interval. The students indicated they did things like sending a text message, checking email and visiting social media sites.
However, those who weren't reminded they had an upcoming task performed more activities than those who were told they had a task soon.

"We feel that if we have a meeting in two hours, we shouldn't work on any big projects. So we may spend time just answering emails or doing things that aren't as productive," she said.

That may explain why, on days when we have meetings spread throughout, we feel like we have accomplished little. The problem is that we aren't maximising the time in between those meetings, she said.