Thousands participate in annual 'Sikh Day Parade' in US

Men, women and children, dressed in their traditional finery, turned out in large numbers for the 31st Sikh Day Parade. 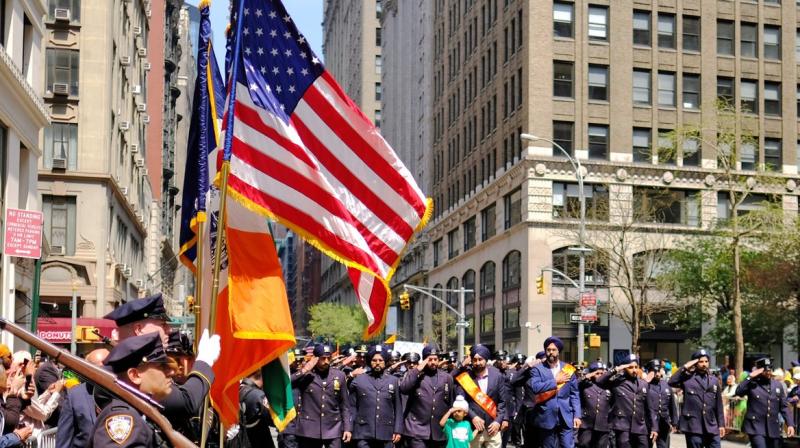 Following the 9/11 attacks, Sikhs remain hundreds of times more likely to be targeted in cases of profiling, bigotry. (Photo: Twitter/NewJerseyAG)

Thousands of Sikhs in the US have participated in the annual Sikh Day Parade in the heart of Manhattan here, spreading awareness about the faith amid incidents of hate crimes against the minority community.

Men, women and children, dressed in their traditional finery, turned out in large numbers for the 31st Sikh Day Parade on Saturday, inundating Manhattan with a sea of turbans.

New York City Police Commissioner James ONeill and Hoboken Mayor Ravinder S Bhalla attended the parade. ONeill said it was an honour for him to take part in the parade.

"As our great city grows more diverse, were committed to making sure the #NYPD does, too. The best way to serve all neighbourhoods is to ensure every community is represented within our department. Public safety will always be a shared responsibility," ONeill tweeted.

Sikhs of NY co-founder Chanpreet Singh said members of his team did "sewa" at the "langar" of the parade, referring to the Sikh practice of community kitchens and offering free food to people.

"The parade is a celebration for our culture. It helps us portray what we believe in. Such events help in creating awareness about the Sikh culture and how it is accepting of other faiths and traditions," Singh told PTI.

He said the Sikh community has faced hate crimes since the 9/11 attacks and through events such as the Sikh parade, the community hopes to convey to the "everyday Americans or western persons that we are just like you and Sikh values are like American values".

A Sikh organisation in the US had recently created a world record by tying thousands of turbans within a few hours as members of the community commemorated the annual Turban Day at the iconic Times Square in New York.

According to Sikh rights group Sikh Coalition, following the 9/11 attacks, Sikhs remain hundreds of times more likely to be targeted in cases of profiling, bigotry and backlash than others.