IIT-B sends cooking for a SIX

A team from IIT’s Mumbai campus Invents prize-winning solar chulha that can cook three full meals for a family of five from the comfort of the home. 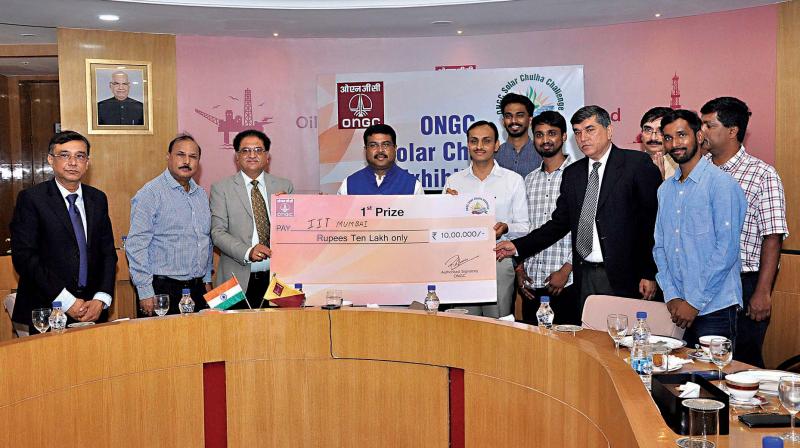 Prof Chetan Solanki is awarded `10 lakh for the ground-breaking and revolutionary innovation.

While Mumbaikars bearing the brunt of a cruel summer, a team from the Indian Institute of Technology, Bombay (IIT-B) have come out with a novel idea to harness heat and use it productively by using it for cooking purposes in the form of a solar chulha (solar stove).

The idea, a first for domestic usage, has made an immediate impact and received a thumping acknowledgement from the ministry of petroleum and natural gas at a recently concluded competition organised by the Oil and Natural Gas Corpora-tion (ONGC) at New Delhi.

The solar stove by the IITians under the guidance of Prof Chetan Solanki won the first prize and a cash award of `10 lakh too.

Speaking about the solar stove made by his team of five students, Prof Solanki said that there is an urgent need to revert to renewable forms of energy to ensure a healthy and safe environment and the solar stove was the outcome of that effort by him and his team.

“The solar stove started off as a student project but, looking at its usefulness and potential, we converted the project into one that could be used by the common man,” said Prof Solanki.

The final product was aptly named SIX, which means solar intelligent cooking with storage. It provides three units of electricity every day which is sufficient for cooking three meals daily for a five-member family.

Elaborating on the installation and cost of the solar stove, he said that though the cost of the stove, panels and batteries could range anywhere between `2,000 and 50,000, the investment could help the user recover the same in two years as it could cut down usage of around 15 LPG cylinders annually.

“At the above cost a solar stove which has two burners would suffice for cooking meals for an entire day for a family of five and can be installed anywhere, even in heavily crowded areas in the metropolis,” said Prof Solanki.

He added that while the panels would have to be installed on the terrace, the batteries could be kept in the house or on the terrace itself. “The entire weight of the panel and batteries is around 100 kilograms and hence would not put much of a burden on the building structure,” he said.

Speaking about the cooking experience, Prof Solanki said that it is better than LPG cylinders or induction cookers as the solar stove can cook faster.

He concluded saying, “This will be the dawn of solar PV-based cooking. The SIX cook-stove has the potential to provide modular, safe and clean cooking solution to both an urban as well as rural households and will change the scenario of solar-based cooking.”