Something sweet, something hot 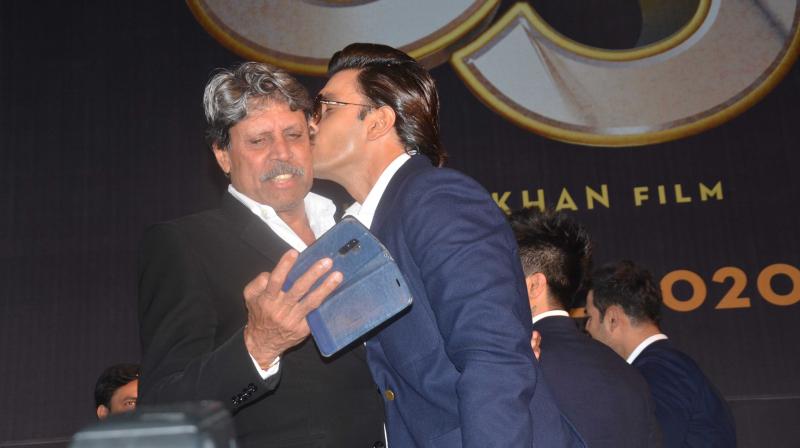 Ranveer Singh and Kapil Dev at the 83 first look launch in Chennai.

Stars Deepika Padukone and Ranveer Singh frequently indulge in some cute PDA, bringing smiles totheir fans’ faces. This time it was on-line by-play between the couple that went viral. Deepika’s hilarious response toRanveer’s Instagram post from Chennai, where he was promoting 83, a biopic on legendary cricketer Kapil Dev, won the hearts of fans and foodies alike.

‘Kapil’s devils storm Chennai!’ wrote Ranveer. But cricket wasn’t what was uppermost on Deepika’s mind. “Don’t comeback without 1-1/2 kgs of Mysore Pak and 2-1/2 kgs of spicy potato chips from Chennai” she posted.

Many tagged her as “typical wife” and posted replies trending the hash tag #wifely Goal.  “A husband is a husband no matter how big a star he is” said one netizen. “Deepika is a true south Indian”, wrote another, adding, “Don’t you dare forget it.”

As soon as Deepika sent her shopping list, Kabir Khan’s wife Mini Mathur followed it up with a post of her own -- “Kabir Khan, kindly repeat the same order.”

Though Deepika plays Romi Dev, the onscreen partner of her real-life hubby Ranveer, in 83, she was conspicuous by her absence on the occasion.

Meanwhile, an excited Ranveer said “This is my first visit to the city and the warmth of Chennaites right from the airport has been overwhelming. I am not able to comprehend what’s happening around me. Am I sitting next to Kamal Haasan, Kapil Dev and Krishnamachari Srikkanth!”

Sharing his experience at the city’s iconic MA Chidambaram Stadium he said “I had a blast there. Kapil Dev Sir bowled an underarm ball to me. It was the last ball before we headed to the event venue. I asked my boys ‘how many runs do you want me to take?’ ‘A six’, they yelled. ‘What if Kapil Sir bowls a no-ball?’ I asked. In my ignorance, I hadn’t realized that Kapil Sir has never bowled a no-ball in his entire career. Also, he has not missed a single match due to injury or illness.”

Heaping laurels on the legendary cricketer, Ranveer said, “Kapilji, you are one of the greatest sports personalities to have ever walked on this earth.” He also revealed that he had worked hard to reprise Kapil Dev and hoped audiences would not be disappointed.

Kamal Haasan, who is presenting the Tamil version of 83 under his home banner, said, “I think I can speak in English. Chennai knows many languages and I am very proud of this. Some of the touching moments during the 1983 World Cricket Match which we did not know of were shared by Kabir Khan. They [the team] were not decorated when they walked in but walked out with decorations when they finally won. The cricketers were not even given enough laundry budget and they were supposed to wash their own clothes on the tour. I heard that Kapil would wash his attire despite the cold weather, and he would not be able tobendthe next day.”

He went on to say, “We see movies like Avengers with a lot of supermen flying around.  But these cricketers are true supermen and avengers.”

“While he [Kapil Dev] created a record, the BBC media walked away with a predetermined mindset without witnessing the show”, Kamal Haasan noted. “Now, I am extremely happy to see that this team has recorded it. I envy Kabir Khan, as I would have loved to directthe film. But he is far more passionate about cricket than me. To play the effervescent Srikkanth isn’t an easy task and I am elated to see Jiiva do it. I always wanted Srikkanth to be a part of some of my movies, including AboorvaSahodarargal, but that didn’t work out then for some reason”, he added