Australian master brewer Peter Fraser talks about the art of craft beer and ways to customise them with local ingredients. 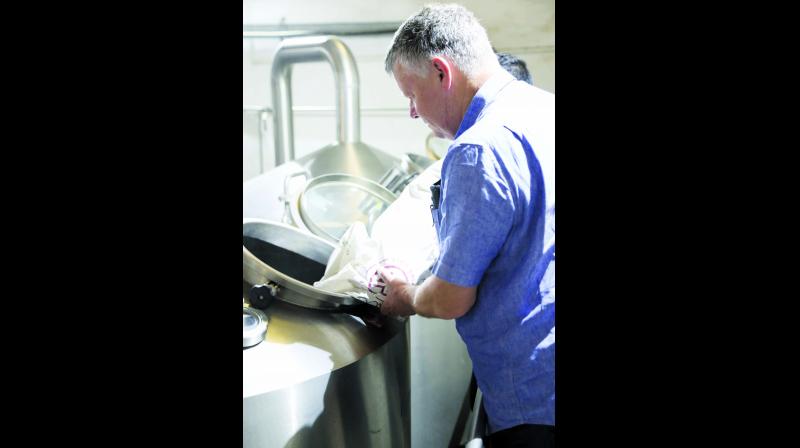 For Australian master brewer Peter Fraser, brewing comprises equal proportions of art and science. Going from a career in agricultural science to spending over three decades brewing variety beers across the world, Fraser recently made a stop in the maximum city as part of Crafters Tap House’s Crafters Movement. “I am very excited to be in India for the first time in 20 years,” beams Fraser about his trip.

Under the movement, brewers are invited from different parts of the world to brew their signature styles in India, all while using an ingredient native to their homeland or India. The programme aims to create more styles of beer that can cater to the Indian taste.

Bringing his local touch to India, Farser introduced lemon myrtle, one of the most popular Australian native herbs, with its fresh fragrance of creamy lemon and lime. The lager (beer) made using myrtle leaves makes for a unique flavoured beer with a light and aromatic flavour of citrus.

While infusing flavours into beer, Fraser is mindful of the climate and how a particular herb or spice will complement the beer’s bitterness and local food. When it comes to beer, the connoisseur believes that both the ingredient and the style of crafting beer makes each one stand out.

“The lemon myrtle lager is particularly suited for summer and warm weather drinking. Lemon myrtle gives a citrus character with lemon-lime upfront on the palate. The notes are complex which leaves a subtle after taste,” explains the brewer, adding, “A light summer salad and seafood dishes like fish tacos and grilled shrimp can be a good accompaniment to this beer.”

Though Fraser wanders off on a tangent talking about the art and science of producing beers using grains — for example, barley and hops — before converting it into a sugar-like liquid and fermenting them using yeast, he comes back to emphasise on the idea of mixing two brewing cultures. “We’ve taken a beer which Crafters is good at making and added an Australian touch it. If I had more time here, I would love to experiment with Indian ingredients as well,” he smiles.

With distinct preferences for styles like Munich Helles and Dunkel Lagers, the brewer lays out the main difference between bottled and crafted beers. “Bottled beers are pasteurized while craft beers (tap beers) are fresher. Most importantly, the bottled beers give away the significant changes in the taste, aroma, and lifespan of the beer. The craft beers are brewed in smaller batches and the major focus is on flavours and freshness of the beers, which is the reason they are also called artisanal hand-crafted beers,” he explains.

Talking about the beer culture, while Fraser agrees that Aussies drink more beer as India has a more spirit-driven market, he quickly avers that the average beer drinker in India loves their beer just as much as Aussies do.

And given the growing acceptance of artisanal beers in India, the beer connoisseur is optimistic about a flourishing market five years down the line. “People want variety in flavours, which the big breweries can’t match with the craft breweries. Craft beers are handcrafted in smaller batches which makes it easy to modify to meet personal preferences,” he shares.

As for his own plans, the expert wants to work a lot more with brewers and help them grow. “I want to solve their problems with their brewing concerns if any. I also want to work with the craft beer industries and see how can we make them efficient,” he concludes.