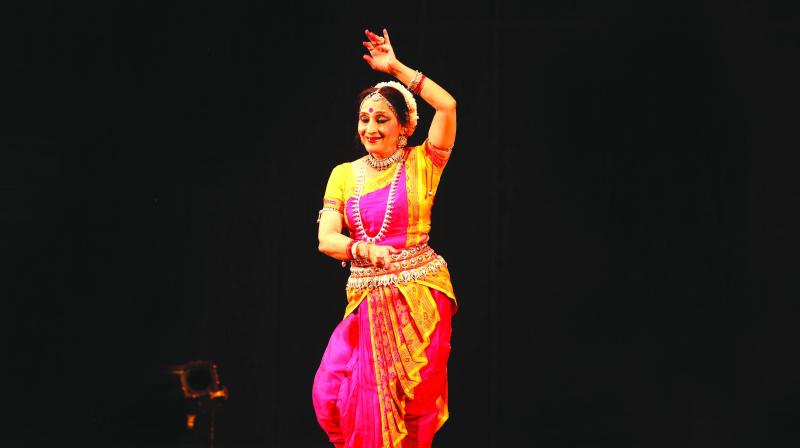 Kathak maestro Shovana Narayan performed to the poetry of Lal Ded and Gangasati, who were both women saint poets revered by the people of Kashmir and Gujarat respectively. While Odissi dancer Ranjana Gauhar performed the Gita Govindam written by celebrated poet Jayadeva in the 12th century. She danced to Sakhi Hey Keshi Mathan Mudaram, the sixth Ashtapadi where Radha and Krishna are the vehicles for the universalisation of emotions. Krishna represented the divine and Radha the soul yearning to be united with the supreme divine. Rashmi Vaidialingam dances to Meera’s bhajan Chalo Man Ganga Jamuna Teer that involve Krishna’s mischief in hiding the gopis’ clothes.

Speaking to the sutradhar (narrator) of the dance recital, Alka Raghuvanshi, she points out that any creative artform is “questing for the eternal”. She adds, “I think all of us are looking for a way of connecting with the Paramatma whatever art you are practising. There is an element of a quest for perfection and only God is perfect.”

Speaking on her role as a sutradhar, she says that her role in the recital comes in as “someone who connects the dots — as someone who is seeing the overview.” she further adds that this was the first time she was a sutradhar for a recital. “I wouldn’t call it a debut as it is not something I would be doing all the time,” she affirms.

While the three dance forms on the show — Kathak, Odissi, and Kuchipudi — are different from each other, there are some commonalities that are associated with it, agrees Raghuvanshi. She adds, “The common thread, in this case, is the selection of poets. All of the poets are from the bhaktikaal. All of these poets wrote in vernacular languages.”

She believes that through the means of recitals, she has a responsibility of representing the Indian culture to the masses. “These poets have written for the people and not for a niche audience — they have written for the people because they were a part of the rebellion. I see it as something that links the country because that period was very long (6th to 17th century) and, it was a period of resurgence of poets who nearly broke the mould”, she explains further adding, “The idea is always to reach out to a larger mass of people even though classical arts are essentially is meant for a niche audience. The idea also is to reach out to people who will connect with this attempt to bridge many gaps of perceiving dance as a shinghar pradhan thing.”

The dance forms on display, have an enthralling effect on audiences even today. The sutradhar points out the reason saying, “Whenever these dancers perform — even if it is the same choreography — there is an element of growth and that interpretation shows whenever they perform. Their understanding of the dance leaves more depth.”

When the dancers perform on stage, they go into their own world and forget that there is anyone there. She says, “They are relating to the world that they are dancing to, the music and their experience. It’s not a very simple thing. It is so complex that when they make it a part of their being, they make it look effortless.”

It was seen that the audiences were lost in the dance while they saw the performance. On the same, she adds, “I think it is the most wonderful thing. I think the artist has won in transporting the audience into his/her own world.”