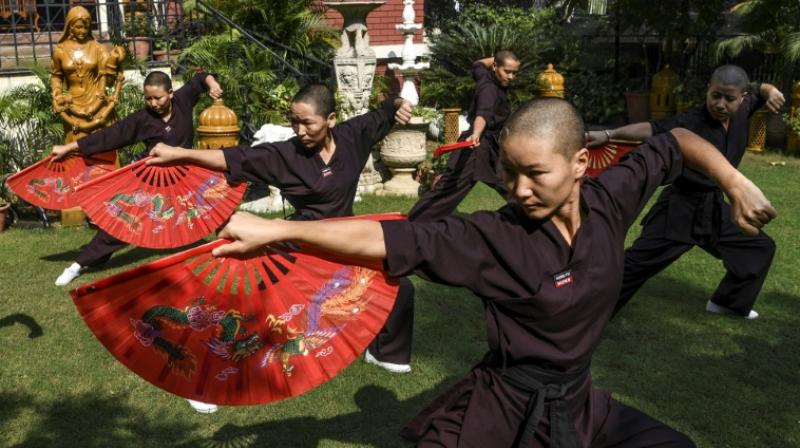 They also embark on gruelling mountain walks and cycling campaigns to reach out to remote communities. (Photo: AFP)

New Delhi: They train with swords and fighting fans after their prayers and morning chants. Meet the Himalayan kung fu nuns using their martial arts skills to challenge stereotypes about women's roles in the region's patriarchal societies.

"In the Himalayas, girls are never treated equally and girls are not given equal chances -- that's why we want to push the girls up," practitioner Jigme Konchok Lhamo, 25, told AFP. "Kung fu has helped us in taking a stand on gender equality as we feel more confident, we feel strong physically and mentally.”We are doing kung fu as an example for other girls."

The nuns are from the 800-strong Druk Amitabha Mountain Nunnery in Nepal and belong to the centuries-old Drukpa school of Tibetan Buddhism. In 2008 as part of his mission to bring about gender equality in Buddhism, spiritual leader His Holiness Gyalwang Drukpa encouraged them to learn kung fu and take on traditional norms that forbid women and girls from leaving the confines of the nunneries, leading prayers or being fully ordained.

Emboldened by their fighting prowess, the nuns travel across South Asia to teach self-defence classes and promote awareness about human trafficking in a region where violence against women is rarely reported. They also embark on gruelling mountain walks and cycling campaigns to reach out to remote communities.

Most recently, they completed a three-month, 5,200-mile (8,370-kilometre) "bicycle yatra (journey) for peace" from Nepal to the mountains of Ladakh in northern India, where they passed through villages and spread their messages of gender equality and empowerment.

Lhamo -- who was in New Delhi in early November after picking up an international award in New York for the nunnery's efforts to inspire young girls -- became a nun at just 12 despite strong disapproval from her family.

"There was a lot of criticism in the beginning. People didn't really like it because we were breaking rules," Lhamo said after she and her fellow nuns put on a demonstration of their prowess. They wielded tasselled swords and open, Chinese-style fighting fans -- which are used for signalling commands during combat -- emblazoned with dragons and phoenixes. "But now when we go back to the same places we get a lot of good response. "They call us to schools. They put the girls in front and the boys at the back. They give girls equal chances to ask questions and talk to us."