Global warming has become science of our dismal future

The climate crisis is here, get used to it. 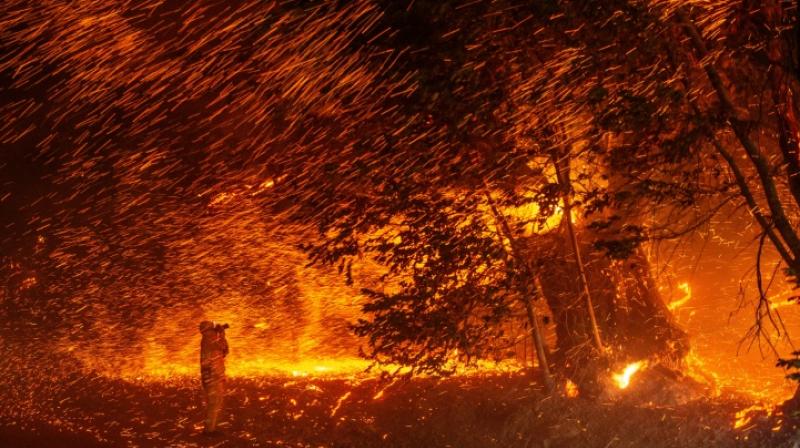 A larger expanse of ocean warm enough to incubate these cyclones has spawned devastation in regions. (Photo: AFP)

Washington: When teen climate activist Greta Thunberg, nominated for the Peace Nobel this year, scolded titans of industry in Davos and heads of state at the United Nations, she told them to look at the science. Excellent advice, but not for the faint of heart. If economics is the "dismal science", research on global warming has become the science of our dismal future.

Four blockbuster reports from the United Nations over the last year have made it inescapably clear that the window of opportunity for avoiding serious consequences from our meddling with Earth's climate system has slammed shut.

The impacts, in other words, are already upon us and will get worse -- perhaps far, far worse -- before they get better. With one degree Celsius of warming above preindustrial levels, the world has already seen a crescendo of tropical storms swollen with more moisture and made more deadly by rising seas. A larger expanse of ocean warm enough to incubate these cyclones have spawned devastation in regions -- Mozambique was hit twice this year -- rarely affected in the past.

Erratic monsoons in south Asia shedding too much or too little rainfall at the wrong time; deadly heatwaves over the last 18 months in East Asia, Europe and North America; warming at the poles twice the global average wreaking havoc on infrastructure and fuelling wildfires -- all are a foretaste of things to come, scientists warn.

On current trends, our greenhouse gas emissions will heat the planet's surface another three or four degrees by 2100. Even if all nations -- gathering Monday in Madrid for another round of UN climate talks -- honour their carbon-cutting pledges under the 2015 Paris Agreement, we'll add at least two degrees.

The first of the 1,000-page "special reports", delivered by the Intergovernmental Panel on Climate Change (IPCC) in October last year, reset the threshold for a climate-safe world from 2C to 1.5C. Across a wide range of impacts, an extra-half degree of warming was found to make a huge difference, even the difference between life and death: 70 per cent of the tropical corals upon which half-a-billion people and a quarter of marine species depend are projected to disappear in a 1.5C world. Half the corals in the Great Barrier Reef are already gone.

In a 2C world, however, they will all but disappear. The report concluded humanity must fundamentally change the way we produce, distribute and consume almost everything, starting with energy. Next, in May, was a UN report revealing that a million species -- one in eight -- faces extinction.

Five times in the last half-billion years' abrupt natural calamities have tipped the planet into a "mass extinction event" with at least two-thirds of all life forms unable to adapt. Today, it is a human activity that has triggered a mass dieoff, with species vanishing at 10-to-100 times the normal "background rate" or more.

In August, the IPCC released an assessment of how we use and abuse land: deforestation, unsustainable agriculture, destruction of ecosystems. The global food system -- responsible for a quarter of carbon pollution -- must be overhauled from top to bottom, both to ensure that 10 billion people can eat their fill in 2050, and to tame global warming, the UN body warned. The final tome in the quartet looked at oceans and Earth's frozen spaces, known as the cryosphere.

The world's two ice sheets -- atop Greenland and Antarctica -- have shed more than 430 billion tonnes of mass every year since 2005, and are now the main drivers of rising seas, on track to surge a metre higher by 2100, the report concluded. Some studies project a two-metre (6.5 feet) increase by century's end, but all experts agree that sea-level rise will accelerate after that and continue for centuries, redrawing the world's coastlines.

Some 300 million people will find themselves in flood zones by 2050, according to even more recent findings. Most alarming of all, scientists agree, is the threat of runaway global warming -- a scenario in which manmade carbon pollution triggers the release of greenhouse gases from natural sources, such as permafrost in Siberia and methane formations in shallow Arctic seas.

Several times in Earth's distant past its climate system has tipped into a new stable state -- a "hothouse Earth" -- that was 10C, 12C even 14C hotter than today. None of this, of course, means that humanity should collectively throw up its hands up in despair. "We are going to have to adapt to some changes that may now be unavoidable," Tim Lenton, director of the Global Systems Institute at the University of Exeter told AFP.

"But the fact that we start to see some unexpected shifts in the system should give us an extra impetus to meet the Paris goal of limiting warming as close to 1.5C as we can."