Archana was bitten by the nature bug in the sixth grade. 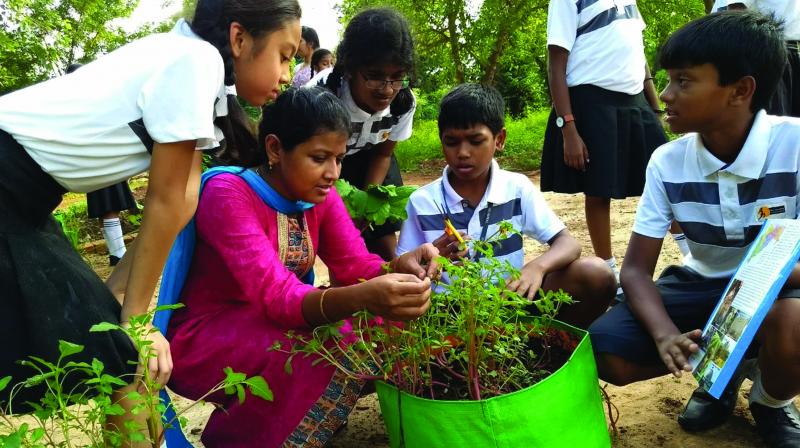 myHarvest Farms, founded by Archana Stalin, is like Farmville in real life where people can book a mini-farm of 800 sq ft exclusively for their family in which vegetables of their choice are grown.

Want to grow your own vegetables and eat them too? Engineer by profession, Archana Stalin found her true calling in reviving gardening and farming among the urban population and has made healthy eating a reality. Born in a village in Theni district and raised in Chennai, Archana aspired to be an IAS officer but ended up in engineering.

“At the prestigious College of Engineering, Guindy I chose to study B.E. Geo-Informatics and fell in love with my classmate Stalin who I married right after graduation. We have similar interests and while in college, we co-founded a not for-profit called BUDS Trust,” she says.

Archana was bitten by the nature bug in the sixth grade. “I was always proactive and contributed my best for environment conservation drives at college as well.”

Wanting to eat healthy in the family gave rise to the idea of growing their own produce at home. Archana’s efforts picked up speed and thus myHarvest came into being. “myHarvest was the result of my curiosity to make a sustainable world a possibility. I believe in the saying, "We are what we eat.” Unfortunately today, most of what we eat isn't right. We are eating a lot of chemicals in various forms,” explains Archana.

Today the initiative has come a long way and currently the couple farms 5 acres in outer Chennai. “Initially we made compost pits at our home and created a small kitchen garden to grow spinach. It soon extended and we planted all over our kitchen garden and filled our terrace with lots of vegetables. We ate all that we grew and realised at our family was eating  healthy stuff and becoming stress-free too,” says an elated Archana.

Many of her friends requested the couple to establish small gardens on their terraces. This was the eureka moment. Archana and Stalin  launched “myHarvest” which enables people to eat what they grow. myHarvest helped many people set up terrace gardens and also rent farms to grow vegetables of their choice.

myHarvest wants to inculcate the spirit of farming in the younger generation. Archana and her team have several programmes for children. ‘Reconnect with Nature’ aims to make children more eco-sensitive and encourage them to grow plants. “We let the children explore nature, create a garden at school, grow vegetables, make their own food with vegetables grown by them. We teach them the basics of farming. At school, we are trying to bring in the UN 17 sustainable development goals (SDGs) to transform our world by setting up a green lab - a green space to love nature,” says Archana.

myHarvest is also into conservation. “So far, I and my team have planted over 1,000 tree saplings and are nurturing them. All of them are native trees like neem, pungam and palm. We have also restored three ponds and managed water in dry areas of Virudhunagar,” says Archana.

As part of her efforts to fill everyone’s plate with chemical-free food, Archana and her team have started rearing native breeds of hens commonly known as free range country chicken. “Currently we are nurturing about 600 birds and plan to sell eggs and meat in the next 3 months,” she says.