Social media is strife with speculations and have risen slogan #WhoKilledRagu in their quest towards finding answers. 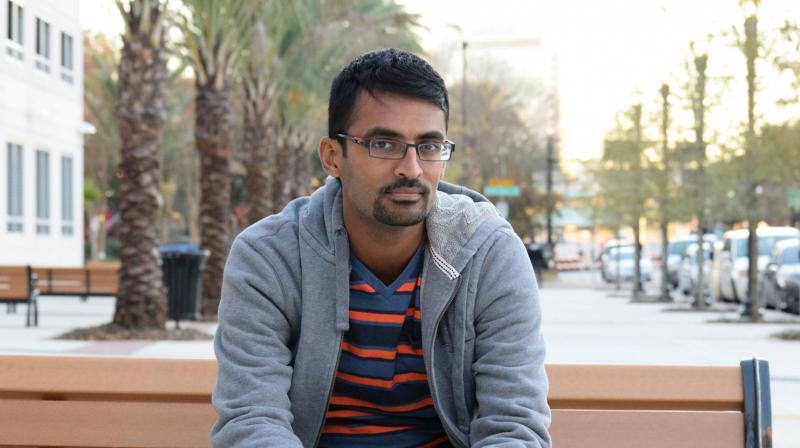 The Tamil Nadu government has shrugged off responsibility, claiming that the techie died after being hit by a truck. (Photo: Facebook/ Ragupathy Kandasamy)

Software engineer Ragupathy Kandasamy, who was back home in Tamil Nadu’s Coimbatore from US to meet his prospective bride, died on Saturday morning after he reportedly crashed his bike into a temporary illegal wooden hoarding set up on a road by the ruling AIADMK for its MGR centenary celebrations.

Before leaving, he wanted to visit the Palani Murugan Temple for which he was travelling to the Singanallur bus stand, planning to take a bus from there on.

While the 32-year-old was not wearing a helmet at the time of the incident, social media is strife with speculations and have risen the slogan #WhoKilledRagu in their quest towards finding answers.

The illegal arch that was erected to welcome #AIADMK leaders in Coimbatore #WhoKilledRaghu ? pic.twitter.com/LuSKUEpvG6

Srihari Balakrishnan spoke about how he had sent a picture to ministers to take action against the illegal construction.

#whokilledragu I took this photo when they were building this and sent to @nitin_gadkari as it is a national highway pic.twitter.com/fOoGXhWOxz

One Shabbir Ahmed pointed out if action would ever be taken,

The police that arrests cartoonist, activists, teachers for nothing...will they register an FIR against TN Minister SP Velumani who is organising the MGR centenary celebrations in Coimbatore for techie #Ragu's death? #WhoKilledRagu pic.twitter.com/ovDpz5mq9v

While Mohan Kumar asked a simple question to powers-that-be,

Others too took to Twitter to express their shock, disbelief and anger,

This Government should answer for the loss of a innocent life #WhoKilledRagu pic.twitter.com/S16oklqS4N

I really feel bad for you .. just to protect the wrong doing of your party you are accusing someone who is dead now with these kind of cheap reasons.. @flytoragu he is my close friend and he was on his way to palani temple.. do You still believe he was drunk ? #WhoKilledRagu

@nitin_gadkari When authority will follow rules & regulation? #WhoKilledRagu . Only aam adami is always faulty..... Just Think on it my beloved Indians https://t.co/WXxrUq9p4i

Police trying to frame Ragu's friends for writing #WhoKilledRagu in where he got hit by a illegal #ADMK arch at the middle of highway. But they fail to register a case against those who put the illegal banner. May be we should start writing this in front of all illegal banners pic.twitter.com/qZytYuXZfz

The Tamil Nadu government has shrugged off responsibility, claiming that the techie died after being hit by a truck and not because of the wooden arch that was erected by the AIADMK.