Gandhi said that the ex-servicemen told me that OROP has not been implemented, and they also discussed other issues. 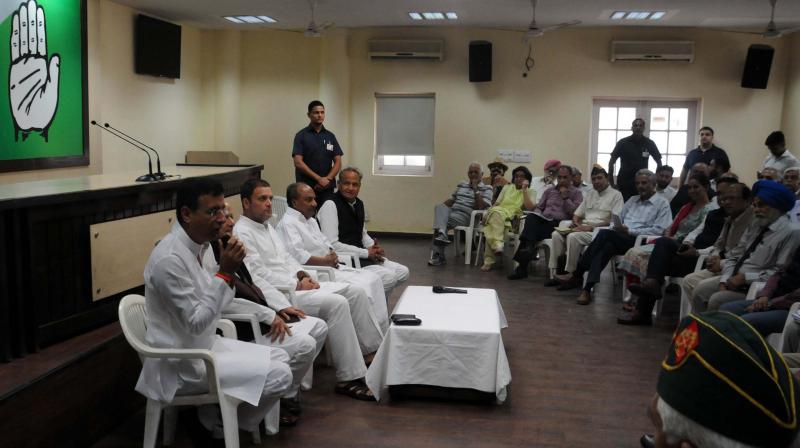 New Delhi: After Congress president Rahul Gandhi told a group of ex-servicemen on Saturday that a Congress-led government would fulfill all the commitments the party had made on the “one rank, one pension” issue, the BJP said that the Congress president has been forced to remember soldiers after being out of power for four and half years. The ruling party claimed that by executing the OROP, the government has given soldiers their due respect.

Mr Gandhi made the remark at a press interaction, after a 30-minute-long meet with retired defence personnel at the AICC headquarters, during which the Rafale deal issue and the Kashmir situation also came up.

Mr Gandhi told the ex-servicemen that if his party is voted to power in the 2019 parliamentary election, it will “fulfill all the commitments”, the Congress had made on the OROP issue.

He said that the ex-servicemen told me that OROP has not been implemented, and they also discussed other issues.

“These issues are related. That they (the government) have Rs 30,000 crore to give to Anil Ambani but our soldiers can’t be given OROP. This is the connection...And, the amount of Rs 30,000 crore was more than enough to solve the OROP issue,” Mr Gandhi told reporters.

BJP media head Anil Baluni said Mr Gandhi was seen “standing with the corrupt” when the Congress-led government was in power between 2004 and 2014, but he did nothing for soldiers.

“It is shameful that Gandhi is criticising the Modi government which implemented the ‘One Rank One Pension’ (OROP) scheme for soldiers while he himself did nothing for them. It is the new kind of low-level politics he has started,” he said.

Mr Baluni said though Mr Gandhi was the most powerful man in the 10 years of the UPA rule, he had never uttered a word for soldiers. The Gandhi family was in power for more than 40 years but executed no welfare measures for soldiers, he alleged.

Taking a dig at the Congress chief, Baluni said,”After being our of power for four and half years and getting no closer to it, Gandhi has begun remembering soldiers.”