A test of patriotism

According to filmmaker Sreebala K. Menon, the compulsion to stand up while playing the National Anthem in theatres is not democratic. 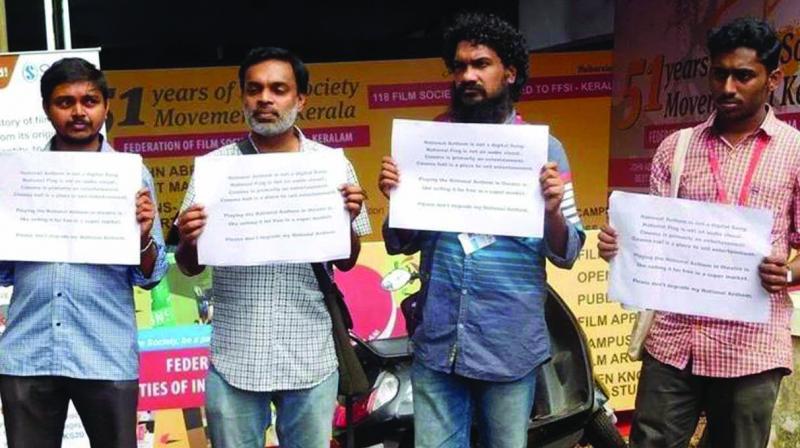 A photo posted by Sanal Kumar Sasidharan on his Facebook wall.

In 2016, when the Supreme Court made playing the National Anthem mandatory in theatres and instructed everyone to stand up while it was played, there was an uproar. Many opined that it was a forceful act and even staged protests. The outcome was that they were branded unpatriotic. Viewers were even arrested during some film festivals. The practice went on until the Supreme Court said a few days ago that people do not need to stand up in cinema halls to prove their patriotism and asked the Union government to take the final call. This has come as a relief to moviegoers.

“The current observation by the Supreme Court is correct,” opines Shaji Joseph, a college lecturer and film-lover. He is a regular at film festivals and had witnessed the commotion that occurred last time over the National Anthem issue. “Last year, when the order was pronounced, the court said it was to create a feeling of oneness among people. We are not against creating a feeling of togetherness. But a cinema hall where people come for entertainment and relaxation, shouldn’t be the place to execute that. Play the anthem in government offices, courts and Parliament, it would be ideal. Moreover, patriotism is not something that we should force upon people. Love for the motherland should emerge from one’s heart,” he adds.

According to filmmaker Sreebala K. Menon, the compulsion to stand up while playing the National Anthem in theatres is not democratic. “In the past, those who didn’t stand up were labeled unpatriotic and were arrested. If people stand up in theatres now, it is mainly because of those fears. I don’t think that is a democratic way in a democratic country. Fear and democracy won’t go together,” says Sreebala. “During a film festival, one difficulty we faced was that we had to stand up before the screening of each film. Suppose, you watch six films a day, then you will have to stand up six times. Isn’t that too much?” she asks.

She too believes that there shouldn’t be compulsion. “During meetings, National Anthem comes at the end. Even if they want to play the anthem in cinema halls, why don’t they follow the same format? Why it is played at the beginning of the screening? It is because they feel that people would leave theatres once the end credits start and don’t wait for the anthem. So, there is a feeling of compulsion in the audience. That should change. Cinema is not different from other mediums. If the anthem comes at the end of the screening, then people would feel it is normal,” she says.

Filmmaker Sanal Kumar Sasidharan feels proud that he could hold a protest at the IFFK venue last year. “Happy to read that the Supreme Court of India is reconsidering its earlier order of making the National Anthem mandatory in theaters. Feeling proud that some of us could at least stage a protest against this decision last year,” he wrote on his facebook page along with a photograph of the protest.

The Kodungallur Film Society was criticised for challenging the Supreme Court’s order. Advocate  Anoop Kumaran of the Kodungallur Film Society says, “The Prevention of Insults to National Honor Act, 1971 is the law related to the National Anthem. According to section 3 of this law, whoever intentionally prevents the singing of the Indian National Anthem or causes disturbances to any assembly engaged in such singing shall be punished with imprisonment for a term, which may extend to three years, or with fine, or with both. But, those who don’t stand up in cinema halls while the national anthem is played cannot be punished based on this because they don’t prevent it or create any disturbance.”

He goes on to say that they approached the Supreme Court to challenge the 2016 order as it was their duty to inform the court that the order would make Nobel Laureate Rabindranath Tagore’s song look ridiculous and create more unfortunate circumstances in theatres.

The Supreme Court’s new observation has boosted the Society’s confidence. They believe that the questions raised by the court stand as testimony to the society’s stance and serve as a befitting reply to those who tried to brand the organisation and its members as traitors. Senior advocates C.U. Singh and P.V. Dinesh would represent the Society during the hearing on January 9.

Now, the court has asked the government to take a call. What would be the Centre’s stance? “Thinking in line with the current political ambience, there is a chance that the government would go ahead with the earlier version,” opines Shaji. “The government should have thought about the repercussions before executing it. Now, the damage has been done. It is difficult to do damage control,” says Sreebala.